Can someone help me identify this story about child slavery?

I read this last year in my English class and its a book about slavery.

I believe that this gruesome book is a kids' book as well.

Would it be Canned by Alex Shearer? 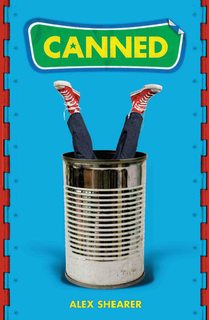 Summary from Kirkus Reviews (emphasis mine):

This macabre mystery may make readers give up canned foods. Fergal Banfield, an eccentric English lad with the peculiar hobby of collecting unlabelled cans from supermarket bargain bins, discovers a gold ear stud in his latest acquisition. The mystery deepens when he next discovers a severed human finger in another can. Fergal meets Charlotte, a fellow can-collector, who finds a human ear in one of her cans, and it goes with the gold stud. Fergal’s investigation leads him to a pet-food factory owned by Mr. and Mrs. Dimble-Smith. Fergal makes the grisly discovery that the factory is staffed by enslaved young children from Africa and Asia, who become ingredients of the pet food when they grow old enough to resist captivity. Pressed into service and fearing for his life, Fergal gets a message to Charlotte on a can label about his situation and location, but no one believes her story. So it’s Charlotte to the rescue! The grotesque elements of the story are more suggestive than descriptive, and Shearer’s delightfully droll, dark humor makes for many light moments. Readers with a taste for the bizarre and gross will find this tale most tasty.

Thanks to @Mithrandir for adding some related extracts:

14
Identify a story about murders of homeless people
7
Young adult fiction book: written from a teen boy's perspective about school, sex and Shakespeare
3
Female detective, former police. Dark and troubled past involving violently killing a house of criminals who were holding her hostage and abusing her
4
Identify a book where a teenage girl finds out from her younger sister Martha that she was adopted
4
Paperback book about a falsely arrested man living in the wilderness who raises wolf cubs