Are Vin and Elend symbolically linked to Preservation and Ruin in The Hero of Ages?

In Brandon Sanderson's The Hero of Ages (book three of the Mistborn trilogy), Preservation and Ruin are two anthropomorphized forces of nature, evenly matched in their struggle against one another.

These two forces are represented throughout the books by the colors white, for Preservation, and black, for Ruin. The mists are of Preservation, and are white. The ash is of Ruin, and is black -- really dark black, not the usual ash color (see, for example, the excerpt from Sazed's book at the beginning of chapter 19: "Yes, the ash was black. No, it should not have been. [...] Perhaps it was the influence of Ruin's power [...]"). More explicitly, in the final chapter:

The twists of mist he saw, they led to a vast white light.

He reached out and touched the mist, and felt an awesome power. A power of stability. To the side, the other corpse -- the one he didn't recognize -- was also leaking something. A deep black smoke. Sazed reached out with his other hand, touching the smoke, and felt a different power -- more violent. The power of change.

These powers are not good and evil -- Ruin is something of an entropic force, and Preservation is the anti-entropic force. This distinction appears to be very important to Ruin -- he tries to explain this to Vin more than once. For example, in chapter 57:

Vin, Vin. Why can't you see? This isn't about good or evil. Morality doesn't even enter into it.

Throughout the entire series, Vin wears black, as it's a good color for sneaking at night, as Mistborn are won't to do. At the end of the second book, King Emperor Elend Venture is encouraged to wear white, which improves his image, making him stand out in a world covered by ash. This pairing of colors isn't really emphasized much throughout the book, except for one scene, in which Emperor and Empress crash a ball in a city they have recently placed under siege.

This wasn't an evening for subtlety.

Inside the antechamber, waiting nobility began to whisper and question. Vin heard them asking if anyone recognized these strange newcomers, one in black, the other in white.

However, the stress of the contrasting colors in this passage may only serve to reinforce to the readers that this couple doesn't really belong in that room, by flaunting their nonconformity to societal fashion. Later in the same chapter (30), a short while after the dramatic entrance, we're told that the "men generally wore dark clothing, and the women generally wore colors."

The royal couple are also shown, standing side by side, in white and black on the book's cover (at least, for the edition that I was reading): 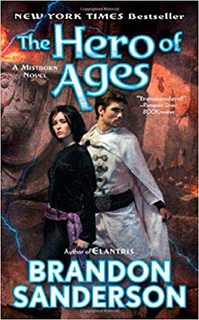 Does the use of these two colors for Ruin and Preservation, as well as for Vin and Elend, signify a link between these two pairs?

I think that this color scheme reflects a larger theme in the book (and, indeed, the series); namely, that of realizing and accepting that one's identity can have more than one part to it. The colors, then, are clues to the characters' initial states. Let me explain.

One idea that is present throughout the series is that Ruin and Preservation don't stack up as good and evil -- they're more about Ruin and Preservation (see, for example, the quote in the question post). They're opposites; where one exists, the other cannot. Where one acts, the actions of the other are canceled. It appears that these two forces are irreconcilably opposed.

However, by the end of the story, Sazed takes up both of the powers, and becomes Harmony. This, of course, wouldn't work very well if Ruin were evil. These things are powers, and they only appear to be contradictory; Sazed's ascension proves that they are, in fact, compatible. This is the most subtle, yet perhaps most significant expression of this theme in the series.

Throughout the entire series, both Vin and Elend struggle to understand the different parts of their personalities and identity, before ultimately realizing that they are, indeed, able to integrate the different facets of their identities into a cohesive whole.

Vin has a short conversation with Elend about their struggles (at their first ball in The Hero of Ages, in chapter 32):

"No," Vin said firmly. "No, I'm right about this, Elend. You've been doing the exact thing I have. You've been so determined to be a good king that you've let it squish who you really are. Our responsibilities shouldn't have to destroy us."

"They haven't destroyed you," he said, smiling behind his short beard.

"They nearly did," Vin said. "Elend, I had to realize that I could be both people -- the Mistborn of the streets and the woman of the court. I had to acknowledge that the new person I'm becoming is a valid extension of who I am. But for you, it's opposite! You have to realize that who you were is still a valid part of you. That person makes silly comments, and does things just to provoke a reaction. But, he's also lovable and kindhearted. You can't lose those things just because you're the emperor."

Vin grew up in the gangs on streets. She becomes, of necessity, incredibly hard and street-smart. After discovering her Mistborn abilities and training under Kelsier, she becomes a super-powered assassin and warrior. These are violent and destructive elements of personality and identity; these might belong to Ruin. She describes herself as a "knife" more than a few times ("She was a knife -- Elend's knife, the Final Empire's knife." -chapter 3).

On the other hand, when she attends her first ball (posing as a noble), she discovers this tremendous affinity for the social life, and for dressing up and dancing. Her struggle to understand how this soft, Preservation-linked1 side of herself fits with the warrior side is discussed many times in all three books of the series. For example, in chapter 27 of The Hero of Ages:

For the longest time, she'd struggled to understand how that part of her fit into the rest of her life. She still wasn't certain she knew the answer. Was Valette Renoux, the girl she had pretended to be at the balls, really a part of Vin, or just a fabrication devised to serve Kelsier's plot?

She also takes up reading and studying, spending more time than perhaps necessary studying the Alendi's journal, and taking extensive notes about it. She studies the Deepness as well.

Vin eventually becomes Preservation, and gives up her life to destroy Ruin. Her final, and perhaps defining act was a major one on the side of Preservation. However, more important was her ability to accept that both parts of her identity are equally valid. Here, at the end of a lengthy internal monologue (ch. 32):

It's...true, Vin thought. I can be both. Why did it take me so long to figure it out?

When Elend is first introduced, he is a gentle and soft-spoken scholar, more interested in books and theories of politics than in getting his hands dirty in any real-world endeavor. This gentleness, I think, should be associated with Preservation.

Almost against his will, he is thrust into the real world and forced to become increasingly more involved in it, first with the (constitutional) monarchy of a city, and eventually creating an empire by (largely Vin's) force. At the end of the second book, Elend gains Allomantic powers, and becomes a warrior and assassin more powerful (if less skilled) than Vin. These violent facets of Elend's identity clash with his former, more simple life, and this is something that dogs the emperor throughout the series.

For example, in The Hero of Ages, he spends much time and mental effort deciding where the line is drawn between protection (of his own people and others) and aggression (accomplishing that protection by conquering an enemy city). In chapter 36:

That was the step he balked at -- the last step that would take him from defender to aggressor. From protector to conqueror. And he was frustrated at his own hesitation.

In that instance, although Elend initially instructs his soldiers to prepare for attack, he ultimately decides chooses the path that Preservation indicated was preferable (in chapter 55) by calling off the attack (ch 65). The color white is mentioned explicitly as a part of Elend's decision-making, there.

I wear white, Elend thought. The color of purity. I try to represent what is good and right. For my men.

"I'm not going to attack this city, Ham," Elend said. "I won't conquer these people, even if it is for their own good."

This would initially lead us to believe that Elend's character is entirely Preservation; however, his final act was not only on a battlefield, but was with of a quality of military prowess that bested Vin's, wreaking great havoc and destruction on the opposing force (ch 81).

Elend moved with a grace she had never seen from him -- she had always been the better warrior, yet at this moment, he put her to shame.

Elend's last, defining act was one of war -- something linked to Ruin. More important, though, is his ability to accept that his ability and responsibility to commit violence was not a contradiction to who he was as a gentleman and a scholar. His final reconciliation of the different facets of his personality is mentioned in chapter 67:

Yomen seemed to take little comfort in the words, but Vin smiled. Not because of what Elend said, but because of how he said it. Something about him had changed. He seemed confident in a way he'd never been before. He had some of the same idealistic air he'd expressed when he'd been a youth at court -- yet he also had the hardness of the man who'd led his people.

He'd finally found the balance. And, oddly enough, it had come from deciding to retreat.

She looked up at Elend, a man she seemed to know better than herself. He hadn't needed to tell her that he'd reconciled the two halves of himself, she'd simply been able to tell it from looking at him.

The colors that are associated with Vin and Elend represent their initial states. At the beginning of the series, Vin was simply a girl of the streets, and a warrior. This violent, Ruin-linked nature is represented by her dark clothes. When we first meet Elend, he was only a gentle-natured highborn scholar; something that is very easily connected to the white color of Preservation.

Ultimately, however, Vin and Elend are both able to discover and reconcile the multipartite aspects of their personalities into a cohesive whole, in the same manner that Ruin and Preservation are joined, through Sazed, into Harmony.

1 This side is more connected to Preservation than one might think. I can't find it at the moment, but there was an excerpt from Sazed's book that discussed Preservation preserving Khlenni culture through the Final Empire's noble class. If true, the balls and the dancing have a strong connection to Preservation.

Not the answer you're looking for? Browse other questions tagged symbolism brandon-sanderson mistborn or ask your own question.

23
Why are Orcs associated with the colors red, yellow, and black in Tolkien's Lord of the Rings?
15
Why is black evil and white good?
12
Are keteks based on some form of real-life poetry?
4
Is the heart in “The Hunt” associated with Desire?
9
Who narrates “Ars Arcanum” in The Alloy of Law?
6
What social group are the Sculpted supposed to represent?
3
Benvolio and Mercutio in Romeo and Juliet