Why is desire "a commodity [Lucifer is] short on"?

In The Sandman Presents: Lucifer - The Morningstar Option #3 (written by Mike Carey and drawn by Scott Hampton), Lucifer explains he needed Rachel Begai to channel her desire to destroy the Velleity, as he himself is short on desire: 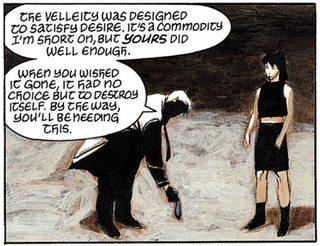 At that point Lucifer has his hidden agenda, namely getting the Letter of Passage from Yahweh - he wouldn't go to all the trouble of fighting the Velleity otherwise.

Getting the Letter serves other means - breaking free of Yahweh's Creation, and of his omniscience and omnipresence. This is what Lucifer wants, or desires (as explained later, from the start of creation) - he doesn't show interest in anything else, and everything he does in the Lucifer comics series is for that one goal.

This was also acknowledged in the last issue of the series: 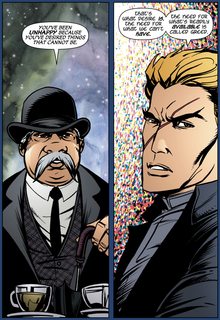 So why is Lucifer short on desire? How does that fit in the rest of the series? Is my understanding of his character wrong?

Lucifer is cold and calculating

Morningstar does not "desire" - he plans and gets what he wants, not "wishes" and "hopes" to get it - there is no passion, so no desire, just cold calculation. There you have Rachel that is full of passion - she regrets that she is responsible for the death of her brother, so she hopes and desires to fix her mistake by killing the Velleity.

Not the answer you're looking for? Browse other questions tagged character-analysis comics lucifer mike-carey or ask your own question.

8
Why does Night say Desire and Morpheus are alike?
6
Why are Delirium's eyes of two colors?
6
Do "The Sandman" and "Lucifer" deliberately share the number of published issues?
4
Is the heart in "The Hunt" associated with Desire?
2
Why does Lucifer mention Raguel and Sandalphon as possible rebels among the angelic host?
13
Is John Milton's Lucifer a tragic hero?