I would like to identify a comedic book that was recommended​ to me some time ago.

I don't remember much, but here is a brief description:

The title may have contained a person's name... If memory serves it may have even been a title containing "Mr. [Name]".

The work is either 1 short, or a collection of short stories.

The cover had clocks in it (perhaps they were warped in a surreal way). This copy appeared to be around 80 pages and has small dimensions.

The story poked fun at certain authority figures (presidents or prime ministers) via implications of incompetence.

If I recall correctly the book was written by an English (UK) author/authors sometime in the past 40-50 years.

It's possible that the story featured time travel or some means of observing the lives of the authority figures from a close distance.

I was able to find the book I was thinking of! It is “The McLandress Dimension” by John Kenneth Galbraith writing as Mark Epernay. The person who once recommended it referred to it in an email recently and it came back to me. My description had a few flaws, and I will try to give a good synopsis of the book here as well as refer to my previous descriptors.

The main character of the book does occur in the title, however it isn’t the Mr. [Name] Etc. format I thought, but instead is “The McLandress Dimension”. My description of the clocks on the title was also a bit off – there is only one clock, and it is surrounded by charicatures of the authority figures I mentioned. One of the figures is using his arms to signal a certain time on the clock (as if the arms were the clocks hands as seen below).

As for the bit about the story poking fun at certain authority figures, it does so but not for their incompetence. Instead a large focus of the story is on these people (whom were well known at the time of publishing in 1968) and their inability to focus on topics other than themselves for long periods of time.

From the article mentioned in the comment below I was able to find the following which does a good job explaining the main elements of the story:

“Mark Epernay's slim volume of essays is a paeon of praise to the imaginative and eccentric Herschel McLandress, former professor of Psychiatric Measurement at the Harvard Medical School, a genius fated, Mr. Epernay tells us, for a position of honor among the scientific and medical immortals. Not content to mend the tattered psyches of Harvard students and tired of serving as pathfinder to 'Cliffies trying to find themselves, Dr. McLandress devoted himself to applying statistical methods to the analysis of political and economic trends.”

I have a copy of the book now, and it is 123 pages long with some illustrations throughout. 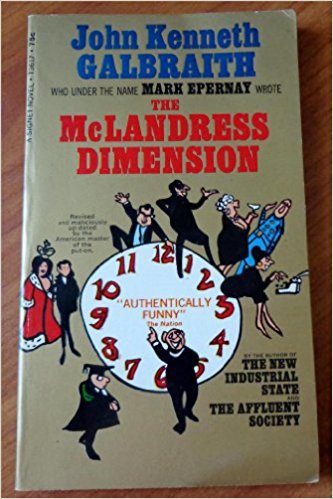 Not the answer you're looking for? Browse other questions tagged identification-request short-stories comedy or ask your own question.