Identify a story about murders of homeless people

I remember 2 years ago reading a book in class about a retired soldier who lures homeless people into his house and murders them.

Can someone please help me find this book? I loved it to pieces when I first read it. 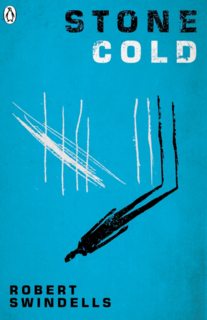 Stone Cold is a realistic young-adult novel by Robert Swindells, published by Heinemann in 1993. Set on the streets of London, the first-person narrative switches between Link, a newly homeless sixteen-year-old adjusting to his situation, and Shelter, an ex-army officer scorned after being dismissed from his job, supposedly on 'medical grounds'.

Just from that Wikipedia blurb, we see that it's a newly homeless person, up against an ex-army officer, who wants to kill the homeless people.

And Penguin Books has this to say:

A tense thriller plot is combined with a perceptive and harrowing portrait of life on the streets as a serial killer preys on the young and vulnerable homeless. Link, aged 17, is distrustful of people until he pairs up with Deb, another homeless youngster. But what Deb doesn't tell him is that she's an ambitious young journalist on a self-imposed assignment to track down the killer and she's prepared to use herself as bait...

Deb appears to match your description of the girl in the story.

6
Help me identify a story about a boy who flees to an island with his friends
19
Story about child slavery and mutilated body parts?
8
Trying to remember a junior fiction story about boys who go back to medieval times
4
Identify a book where a teenage girl finds out from her younger sister Martha that she was adopted
3
Looking for a mystery novel series whose protagonists are two old retired women
2
Crime drama/mystery where a woman suffers a car crash, and searches for a child who doesn't exist
13
A detective story about money printing