How can the Huexotzinco Codex be read?

I'm reading about the Huexotzinco Codex on Wikipedia. Wikipedia describes the document as a "Nahua pictorial manuscript", and claims that it was used as evidence in a Spanish court case.

However, the Wikipedia article also contains several images of the codex. And I have to say, looking at the images, I don't see how the codex could be used as testimony or have any sort of meaning. For example, what on earth is this image supposed to represent?

My two related questions are: how can the Huexotzinco Codex be read? How was it used as testimony in the Spanish court system?

I view the Huexotzinco Codex as important because it tells the indigenous perspective of Spanish colonization using the indigenous writing system. The Spanish made a concerted and deliberate effort to burn indigenous manuscripts and suppress indigenous perspectives. And unfortunately, the Spanish were successful: out of a literary tradition as prolific as any other, about a dozen pre-conquest manuscripts remain, as well as two-dozen post-conquest manuscripts. It's impossible to put into words the knowledge lost or the destruction caused to a culture as important as any other.

The tax record is a five by six grid with images in each grid. This is a complicated document, but essentially the columns on the right record the month using glyphs, while the columns on the left record the quantity of taxes sent to the empire. Each row, therefore, records the tax send at that particular time. Bear in mind that the text also includes information about the political context of various changes in the amount of taxes given to the empire, by (for example) including depictions of various officials at various points in the tax record. For more information, click on the above link, or take a look at the article "Negotiating Aztec Tributary Demands in the Tribute Record of Tlapa".

To return to the Huexotzinco Codex, which I will include images of because the codex is located in the Library of Congress and is in the public domain, we see that it follows a similar structure. While it doesn't include any month or year glyphs (perhaps due to spanish influence, perhaps due to the fact that the codex refers to more or less a one time event), we see that the quantities of tax are clearly drawn out. For example, here is an image of page seven in the manuscript: 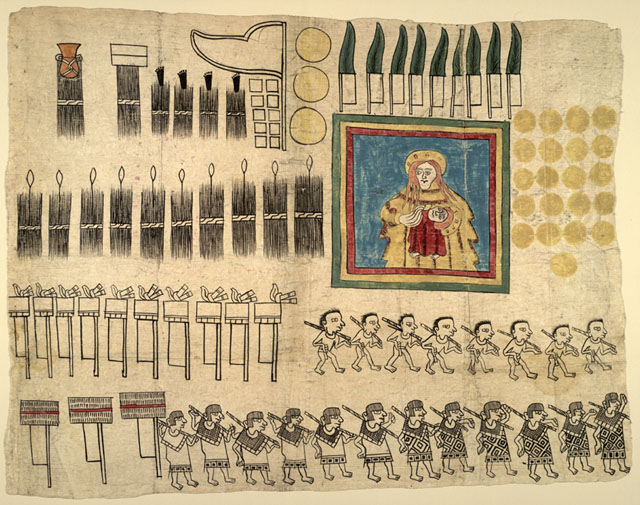 It's not that difficult to see the quantities of goods clearly laid out. For example, the twenty-one circles on the right side of the document represent 21 gold plaques. Keep in mind that some of images represent multiples of goods: for example, the darts on the second row represent bundles of darts. (For more images and more explanation of the images, take a look at The Harkness Collection in the Library of Congress; manuscripts concerning Mexico: a guide).

The Indians presented by the contrary party lack credibility, and they should not be given credence because they are Indian vassals of the said Marques, and all the Indians in general are bad Christians, drunks, liars, idolaters, eaters of human flesh, vile persons who will perjure themselves for anything whatsoever. And much less should the paintings which the contrary party presents be given credence, because they were made by the same infidel and barbarous Indians, and my parties were not cited for it and so they could have painted whatever they wished.

("paintings" refers to the codex.)

As to how the codex was included as evidence and interpreted by the Spanish: first, the "Indians" gave oral testimony in which they referenced the codex. For example, to quote from the testimony of "Esteban, an Indian who was previously named Tochel, which in the Christian language means rabbit":

And as to the maize which they have given to the said factor, they have it painted in a painting which he asked to be shown. And when he saw it he said through the said interpreter, regarding the sixteen black pictures painted after the fashion of the combs of the Indians, that each picture represents four hundred loads of maize and the other sixteen black bands, after the fashion of outstretched banners of the Indians, each one of them is twenty loads.

It's also possible that the codex was interpreted by a Spaniard familiar with the codices. For example, in a related court case also involving the indigenous people of Huexotzinco, Fray Toribio de Motolinia (a Spaniard) gave testimony where he interpreted the codices. Given that the records from the trial include not just the Huexotzinco Codex but also a replica of the Huexotzinco Codex that was annotated in Spanish, it's possible that something similar happened in that trial (Harkness Collection).

Some things to take away from this answer: