The plot is a bit hazy for me since I read this novel years ago but can someone tell me if they know this book? The plot:

Nevermind, after 5 days I found it due to some research.

The book is called Brother in the Land by Robert Swindells 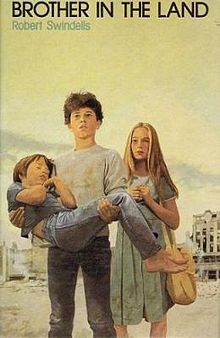 I happened to stumble upon it while reading his other book Stone Cold.

The plot is actually similar, but not exactly as what I stated.

According to Wiki the plot goes:

"The narrative begins on a hillside, where the protagonist, Danny Lodge, encounters a man in a radiation suit, who confiscates his bike and orders him to return to his home town, the fictional Skipley. Arriving there, Danny finds the town in ruins, and learns that his family's shop has collapsed, killing his mother. His brother Ben and their father have survived. Shortly after the war, Danny meets a girl named Kim. The local Commissioner issues an order that the injured and infirm are to be taken out of the ruins and placed at the roadside so they can be taken to hospital: this turns out to be front for his plan to kill off those who will be a burden. Presently, the Commissioner's men come to the shop and arrest Mr Lodge. The lorry bearing Mr. Lodge explodes, killing everyone on board, and leaving Danny and Ben orphans.

The rest of the plot I said is accurate enough. Its a great read I suggest (if you haven't already) that you read it.

12
Looking for an old O. Henry story about a wealthy young man trying to woo a "genteel poor" young lady in New York City
13
Identify a story about murders of homeless people
6
Young adult fiction book: written from a teen boy's perspective about school, sex and Shakespeare
6
Novel about a contract killer being pursued by other killers - Started with an icepick guy and ended with a Latino woman disguised as a cleaning lady
5
An Indian man retires to become a hermit
7
Identify a story about the kid who waves at the train
12
Medical school that brainwashes students, run by drug company that does unethical experiments
9
Everyone keeps diaries due to regular, town-wide amnesia