A book about a clock keeper

This is a dodgy question as I have few details about this book, however:

I am trying to find a book that was already around in the 1990s and famous enough to be translated into Dutch. (It wasn't a Dutch book but was read in the Netherlands, in Dutch, around then).

Its main character was a clock keeper who spent his time keeping many, many clocks running in a large old house.

I believe the genre was mystery and I think there was a murder.

I know it's not a lot to go on but does anyone have any idea what book this could be?

I found the book.

I have to apoligise because it turns out to be a Dutch book after all.

Here is a rough translation of the plot from Dutch, as described here:

Constantin Brueghel, the son of a Dutch cheese farmer who emigrated to France and a French woman, is a graduate philosopher who has a doctorate with a thesis on Time and Duration. He has not eaten much cheese from cheese, and a job in education says little to him, so he takes a job with his uncle. He is responsible for the clocks in a local empty palace. And so Constantin is responsible for the excitement of 1473 bells and pendules, spread over 297 halls and rooms. The builder of the palace - some duke at the time of Napoleon - had stipulated in his will that his belongings would be transferred to the congregation, provided that the clock collection would be preserved and ministered. And so the ironic fate of a doctoral student about Time and Duration wants to fill his days with the excitement of clocks ...

Perhaps The 3 Investigators: The Screaming Clock? 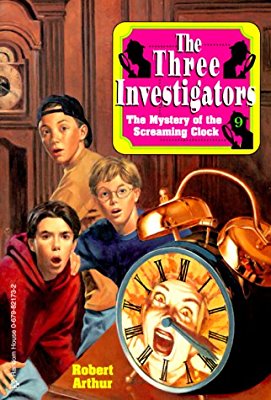 The alarm clock went off with the bloodcurdling scream of a woman in mortal terror! Who could have made such a clock--and why?

The Three Investigators immediately set out to discover where the mysterious clock came from. When they come across a run-down house in Hollywood, they find an entire room full of dreadful clocks--and time is running out!

It was published in 1991, so it fits your time frame, according to Amazon.

and famous enough to be translated into Dutch.

And it looks like it's been translated to Dutch, so that fits too.

Its main character was a clock keeper who spent his time keeping many, many clocks running in a large old house.

I don't remember exactly, but there were a whole lot of clocks running an old, rundown house.

I believe the genre was mystery and I think there was a murder.

It's a mystery series, although I don't think that there was actually a murder in this one.

5
A book about a night shift clerk in a hotel
11
Creepy children's illustrated book, like Jumanji, about boy waiting for parents to come home with new baby, sees faces in walls
9
Book about a boy who develops several accidentally destructive science projects
3
Book about the secret of Delphi oracles and hexagonal patterns
4
Complete, single book of Peanuts comics?
5
Identify A Red Book Glimpsed On Subway, “City Of…”
3
Identification of an American short story about a horse that can't carry two train robbers
6
Searching for an Illustrated Children's Book with Animal Characters
3
Looking for a story about a Confederate leader in the US civil war