Explanation of the line 'But you don't really care for music, do you' in “Hallelujah”

In the first verse of Leonard Cohen's "Hallelujah", there are these lines:

Now, I've heard there was a secret chord
That David played and it pleased the Lord
But you don't really care for music, do you?
It goes like this...

I can't figure out what the But you don't really care for music, do you? line is supposed to mean. Who is it addressed to? Why is it relevant in that spot?

meaning song-lyrics leonard-cohen
Share
Improve this question
edited May 17 '17 at 20:08

The song has many verses, some of which varied in different performances. Even sticking to the "canonical" verses used in the Jeff Buckley version, however, there's demonstrably no one consistent "you" being referred to between verses. This can be shown by the fact that the "you" in the second verse seems to be a composite of Sampson and King David himself, whereas the first verse refers to David in the third person.

Given that, the answer is ambiguous, but the most natural reading to me is to assume the first, third, fourth (and arguably the fifth) verses are all directed to the narrator's lover, who seems to be a somewhat distanced and indifferent figure (with the second verse taking a detour to directly address the subject of the first). The narrator seems to idolize [her], with the first and fourth verses somewhat blasphemously conflating her with God.

Under that reading, we can picture the narrator (Cohen?), a songwriter writing a song for his girlfriend. He pictures himself charming her with his song, like King David pleased the Lord with a "secret chord." But he know that in real life, she's not even a fan of his music, or really any music. There's no secret key to her heart, or at least, not one that he knows (compare the similar themes in Frank Ocean's Songs For Women, which directly references this line).

EDIT: This source indicates that all the best-known verses come from two separate recordings by Cohen, a 1984 version with more religious imagery, and a 1988 version more focused on the relationship with a lover. The Buckley version includes verses from both, although not the single verse shared between versions. It's only the second verse from the first version, however, that clearly addresses someone other than the narrator's lover.

Strictly speaking, this answer duplicates one that @Chris Sunami has already given: the "you" is a woman the singer addresses. But when I came and read his answer, I felt there was still some interest in mine. Like him, I wonder if my answer will strike readers as sacrilegious. I apologize if it is offensive.

The flow of thought in Cohen's lyrics is not logical; it is subjective and psychological. The poet is associating events in the lives of biblical David and Samson with events in his own life.

Passages referring specifically to David include (1) Now, I've heard there was a secret chord / That David played, and it pleased the Lord… The baffled king composing hallelujah; (2) You saw her bathing on the roof / Her beauty and the moonlight overthrew ya; and (3) the title and refrain.

(1) The first passage (Now, I've heard there was a secret chord / That David played, and it pleased the Lord… The baffled king composing hallelujah) refers to the David as a “musician credited for composing many of the psalms contained in the Book of Psalms” (Wikipedia) which does contain the oft-repeated title word. 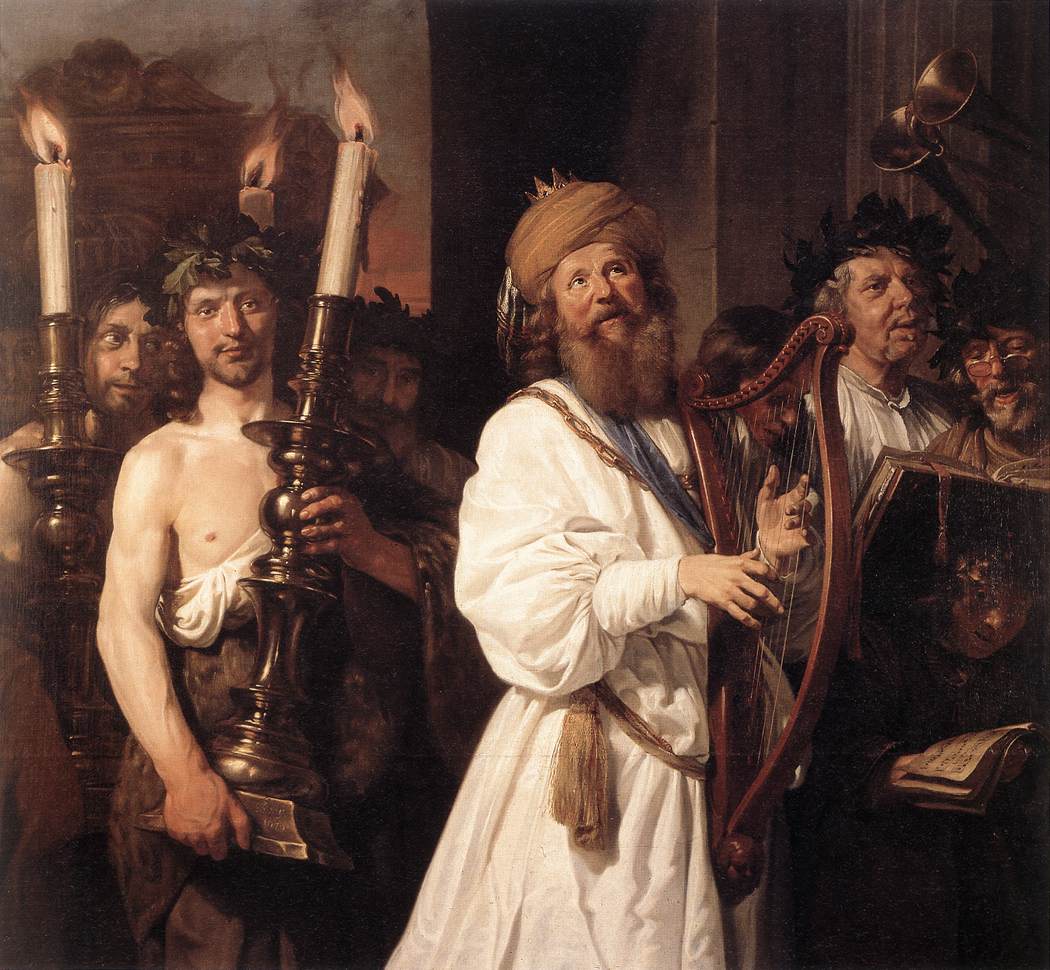 David is often pictured with a harp or lyre, as in the picture David Playing the Harp by Jan de Bray, 1670.

(2) The second passage (You saw her bathing on the roof / Her beauty and the moonlight overthrew ya) refers to the story of David and Bathsheba, which appears in 2 Samuel 11:

2 One evening David got up from his bed and walked around on the roof of the palace. From the roof he saw a woman bathing. The woman was very beautiful, 3 and David sent someone to find out about her. The man said, “She is Bathsheba, the daughter of Eliam and the wife of Uriah the Hittite.” 4 Then David sent messengers to get her. She came to him, and he slept with her. (Now she was purifying herself from her monthly uncleanness.) Then she went back home. 5 The woman conceived and sent word to David, saying, “I am pregnant.”

(3) And the third, the title and refrain, are a word used many times through the book of Psalms and often left untranslated in English versions. (It sometimes appears consecutively, but not in as many consecutive statements as in Cohen’s song. That’s more typical of spirituals.)

Passages referring specifically to Samson include (4) She tied you to a kitchen chair / She broke your throne, and she cut your hair. This relates to the way that Delilah betrayed Samson in Judges 16:

4 Sometime later, he [Samson] fell in love with… Delilah. 5 The rulers of the Philistines went to her and said, “See if you can lure him into showing you the secret of his great strength and how we can overpower him so we may tie him up and subdue him. Each one of us will give you eleven hundred shekels of silver.” 6 So Delilah said to Samson, “Tell me the secret of your great strength and how you can be tied up and subdued.” 7 Samson answered her, “If anyone ties me with seven fresh bowstrings that have not been dried, I’ll become as weak as any other man.” 8 Then the rulers of the Philistines brought her seven fresh bowstrings that had not been dried, and she tied him with them. 9 With men hidden in the room, she called to him, “Samson, the Philistines are upon you!” But he snapped the bowstrings as easily as a piece of string snaps when it comes close to a flame. So the secret of his strength was not discovered… 15 Then she said to him, “How can you say, ‘I love you,’ when you won’t confide in me? This is the third time you have made a fool of me and haven’t told me the secret of your great strength.” 16 With such nagging she prodded him day after day until he was sick to death of it. 17 So he told her everything. “No razor has ever been used on my head,” he said, “because I have been a Nazirite dedicated to God from my mother’s womb. If my head were shaved, my strength would leave me, and I would become as weak as any other man.” 18 When Delilah saw that he had told her everything, she sent word to the rulers of the Philistines, “Come back once more; he has told me everything.” So the rulers of the Philistines returned with the silver in their hands. 19 After putting him to sleep on her lap, she called for someone to shave off the seven braids of his hair, and so began to subdue him. And his strength left him. 20 Then she called, “Samson, the Philistines are upon you!” He awoke from his sleep and thought, “I’ll go out as before and shake myself free.” But he did not know that the Lord had left him. 21 Then the Philistines seized him, gouged out his eyes and took him down to Gaza. Binding him with bronze shackles, they set him to grinding grain in the prison. 22 But the hair on his head began to grow again after it had been shaved.

The biblical figures loved G-d and wished to serve Him; but they were merely men, with weakness and failure in their nature, and they failed in crucial ways suggested in the lyrics -- David with Bathsheba, Samson with Delilah. Yet through it all (in Cohen's version) they repeated the title of the song, which is the Hebrew word for "praise G-d." Serving G-d remained the meaning of their lives, and in that sense they remain loyal despite their failings. They remain hopeful that G-d will accept that which is good in them.

Similarly the poet loves the woman he addresses and wishes to serve her; but he is merely a man, with weakness and failure in his nature, and he failed in crucial ways. (The nature of this failure is perhaps suggested by the fact that David's and Samson's failures were with women.) Yet through it all the poet repeated the title of the song. Serving the woman he loves remained the meaning of his life, and in that way he remain loyal despite his failings and hopeful that she will accept that which is good in him.

The line you ask about is one of the points of transition in the song. The poet says that while David was able to serve his G-d with music, the poet is not able to serve his love with music because she does not like music. This is of course ironic if we think of the poet as Cohen himself, whose occupation is music and who is even at this moment addressing the woman with a song.

I did my best, it wasn't much
I couldn't feel, so I tried to touch
I've told the truth, I didn't come to fool you
And even though it all went wrong
I'll stand before the lord of song
With nothing on my tongue but hallelujah

Referring to "You don't care for music do ya"? Is this not asking the listener if "you" want to please the Lord...Maybe through music"? Or maybe does not want to hear about the "chord" >>>Praises that please the Lord...? Seems the baffled writer believes the listener does not want to hear about the Lord, maybe a non-believer...or someone who condemns David for his method of worshiping.....singing the Chord that pleased the Lord. Most often people who do not care for music does not join in praising God through music. So their understanding of those of us who do is very limited in this area.

Listening to Leonard Cohen's songs, I feel, more so than for any other songwriter, that every word was carefully chosen. In this case, I think the line is addressed to a listener who, for no reason other than to rhyme with 'hallellujah', doesn't really care for music. Cohen didn't explain his songs; they're for us to figure out. "You don't really care for music" is unexpected -- anyone who doesn't care for music wouldn't be listening to a song -- and an interruption to the flow of the lyrics, thus a little jarring (similarly the wise David as "the baffled king"), setting us up for the hallellujah.

Not the answer you're looking for? Browse other questions tagged meaning song-lyrics leonard-cohen or ask your own question.

4
The meaning of the line “and from your lips she drew the Hallelujah” in “Hallelujah”
9
How does the line 'your faith was strong but you needed proof' match the rest of the verse in “Hallelujah”?
5
What does the line “The magi brought valuable gifts, but that was not among them.” mean in The Gifts Of The Magi?
10
What are the 'holy' and 'broken' Hallelujahs?
7
Explanation of a line from the poem “I do not love you ” by Pablo Neruda
10
What does the line “Excellent, i' faith, of the chameleon's dish. I eat the air, promise-crammed. You cannot feed capons so.” mean, from Hamlet?