Which Tintin books were redrawn by Hergé?

The first nine albums were originally published in black and white, with colored editions to appear later:

Which books have been entirely redrawn? I can confirm that Tintin in the Congo, Tintin in America, Cigars of the Pharaoh and The Blue Lotus were, but I have no first-hand experience with the latter titles.
I assume that the books published only in color haven't been significantly modified. 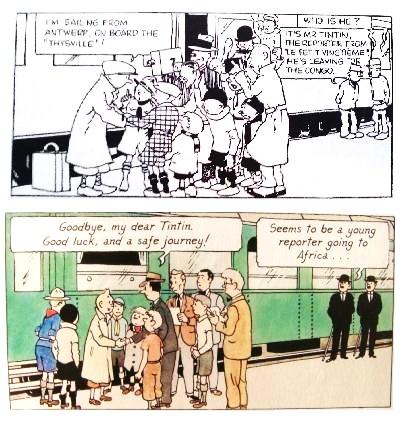 Below is a list of the 24 official Tintin albums with notes on revisions they underwent, where applicable:

Not the answer you're looking for? Browse other questions tagged french-literature comics tintin herge or ask your own question.

5
How many The Outer Limits comics were published in the 60s?
22
How are graphic novels different from comic books?
21
Why were these animals used to represent the different countries in Maus?
7
What were the original two results for 'died in a blogging accident'?
13
Why are comic books listed under PN ("general literature"), and not under authors' respective categories in Library of Congress system?
5
Listing the books in the archives of the Temple of Ganesh
0
Is there "Joker interviewing on a talk show" in DC comic books too?
5
Which ancient philosopher claimed that the sea's salinity was connected with the fall of Phaeton?