Are the guardians of Dream's palace based on mythology? Are they symbolic?

In chapter 3 of Season of Mists (The Sandman #24), there are three creatures shown guarding the gates of Dream's palace (left). The lion refers to the whole group as "Gatekeepers" (p 20-21). 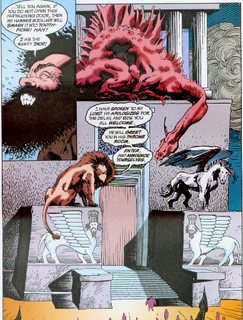 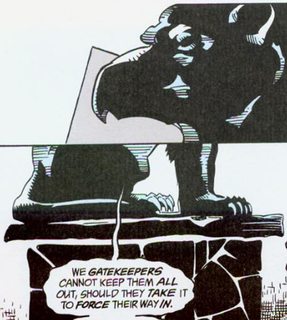 The creatures are an eagle-faced lion (I couldn't find a name for a creature like this on Wikipedia's list -- I'd call it a griffin, as Wikia and Wikipedia do, if it had wings), a red wyvern1, and a Pegasus (or a winged horse; both wikis identify this as a "hippogriff," which I think is incorrect because it has four horsey legs).

These creatures are also shown, with very slight variation2, in "A Dream of a Thousand Cats" (The Sandman #18, p 13). Notably, the eagle-faced lion has wings (and may have a simian body; it's hard to tell through the trees), and the red dragon is green. The winged horse appears unchanged.

Is this grouping of creatures based on anything in mythology? I might have taken them for mere random elements in the cosmology of The Sandman, but for their recurrence from issue #18 to #24 (and, apparently, in future issues as well). Is this a traditional set of mythical beasts, or are they merely (consistent) random elements in Gaiman's world?

Might they have a symbolic meaning? Each of these creatures is associated with some symbolic and/or heraldic meaning. Do their presence or actions in the Sandman stories represent something deeper about the Sandman, or the Dreaming?

1 I would have called it a dragon, but Morpheus calls it "Wyvern" in Brief Lives chapter 2 (#42).

2 At least, in my library's copy of the book. We have found differences in editions of The Sandman in an earlier question on this site.

They are definitely based on mythology, as dragons and hippogriffs are mythological creatures.

According to Imaginary Animals: The Monstrous, the Wondrous and the Human:

"Said to be the product of a union between a griffin and mare, [the hippogriff] represents Christ, who is both human and and divine."

That makes a lot of sense b/c Morpheus is an immortal, but has feeling like a normal human.

The hippogriff is also said to be a symbol of love, which would also make sense as lost love was a major story arc in the series.

I'm having trouble finding legit citations for the "western" dragon as a symbol. (The dragon depicted is squarely a modern conception of a medieval European dragon, as opposed to a Chinese dragon.)

This would fit in that Morpheus is often cast as nemesis to transgressors in the stories, delivering vengeance or punishment.

The Python of Delphi is a very early instance of dragons in the European tradition, and is associated with divine inspiration of prophecy, although the character of the dragon in the comic doesn't make me think of that aspect.

However, the Encyclopedia Americana states that the hippogriff is a symbol of Apollo, so there's a connection with the dragon in that regard.

The architectural precedent dates back to ancient times and is surely the inspiration for the gate guardians.

The first thing that came to mind for me is the cyclopean architecture of the Mycenaean period, and the famous Lion Gates of Mycenae. (Different symbols, same underlying principle.)

Here we find a dragon, although, in this case, the other guardian is a bull. The Ishtar Gate was so well known, it was one of the original Seven Wonders of the World, inspiring the imagination of humans from antiquity onward.

In the Frazerian conception, the stone guardians of the ancient world were a form of sympathetic magic—utilizing the forms at the gates conferred their power for protection. (This is similar in principle to the palladium.) In Morpheus' domain, where anything is possible, the stone figures become animate.

14
What's the significance of the witches' name change in Sandman?

18
Are any Sherlock Holmes antagonists besides Moriarty based on real people?
13
Are keteks based on some form of real-life poetry?
9
Is the character of Randolph Henry Ash based on any particular Victorian poet?
8
Was the Stung Man based on an existing character from Egyptian mythology?
9
In "The Sandman", what are nightmares for?
6
Why are the magicians who captured Morpheus "rubbish"?
13
What are the nets in Ender's Game? Are they based on anything in real life?
12
What are the different names of Fenrir / Fenris Wolf?
4
What is the origin of Dream's helm in Neil Gaiman's "The Sandman"?