What is a beacon?

I'm reading George W. DaSent's 1861 translation of The Story of Burnt Njal (because it's available for free online). I have what some may consider a basic question, but given that I don't know anything about Iceland I thought I would ask it. What exactly is a beacon?

Now both sides ride home from the Thing, and Hauskuld and Hrut ride westward by Hallbjorn's beacon.

I would appreciate answers that go into a little bit of depth about the cultural context of beacons in Iceland at the time period of the story.

It's a geographical feature: a stony hill with a cairn.

A beacon doesn't have to be a man-made signal: the word can mean just a "high hill or other easily distinguishable object", e.g. one which can act as a landmark and provide guidance for sailors or wanderers. See, for instance, the Brecon Beacons.

I searched for "Hallbjorn's beacon" on Google; most of the results were from the Story of Burnt Njals, but I also found the following result from The book of the settlement of Iceland, which apparently describes the history of how these specific hills, or the cairns on them, came to be called Hallbjorn's beacons (emphasis mine):

Snæbjorn and his men came up with them at the hills which now are called Hallbjorn's-Beacons. Hallbjorn and his went to the top of one of the hills and defended themselves there; there three of Snæbjorn's men fell and both Hallbjorn's companions ; next Snæbjorn cut off the foot of Hallbjorn at the anckle joint, whereupon he limped to the southermost hill and slew there yet two men of Snæbjorn's and there Hallbjorn fell withal; therefore there are three beacons on that hill but five on the other.

(For the record, the translation you quote in your question seems pretty accurate. Even without knowing Icelandic, you can see that a word-for-word translation would be something like "Now ride they home from the Thing, both sides, and ride they west past Hallbjarn's beacon.") 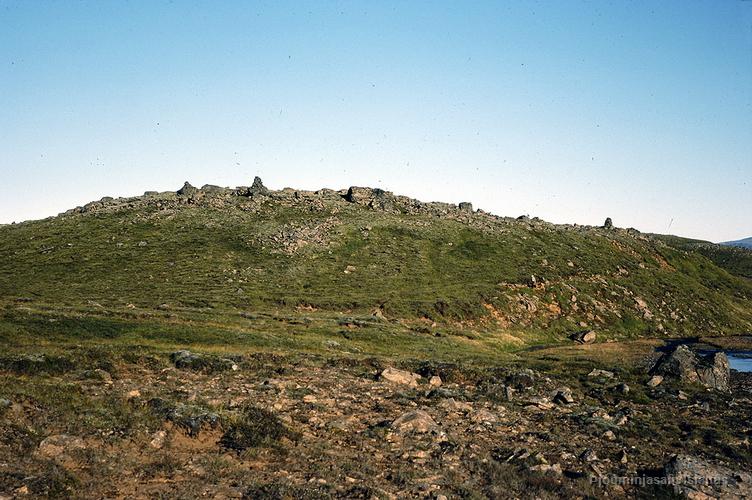 This page (in Icelandic) recounts the same story of Snæbjorn and Hallbjorn as cited above, explaining the history of the name; the same story is also available in what seems to be a fuller and more original form here (also in Icelandic). The Iceland Road Guide describes the Hallbjarnarvörður as "stony mounds with cairns on them", and Map Carta also describes it as a cairn in West Iceland. You can see the cairns on top of the stony mound in the photo above.

4
What is Sophie saying about the Tower of Babel here?
1
What does "The Neck" mean in Herr Mannelig?