I'm probably revealing my ignorance about The Sandman and comic books here. Why does Morpheus look like the writer who created him, Neil Gaiman?

On the left - younger Neil Gaiman (src); on the right - Morpheus from Preludes and Nocturnes

Is this just a random choice? Or is there a deeper thematic significance?

comics neil-gaiman the-sandman
Share
Improve this question
edited May 2 '17 at 16:59

Or maybe he does, just a little bit, because Gaiman sort of looks like a whole bunch of other dudes (and dudettes) who influenced Morpheus' looks.

Well, at least his face hasn't been explicitly stated to be based on Gaiman's.

Reading through canon (that is, word of gods - people who actually worked on The Sandman) sources, I couldn't find an indication that Gaiman was explicitly used as an inspiration for Morpheus' appearance.

There's one bit where Gaiman says about his motivation with Morpheus:

The inspiration for his clothes came from a print in a book of Japanese design, of a black kimono, with yellow markings at the bottom which looked vaguely like flames; and also from my desire to write a character I could have a certain amount of sympathy with. (As I wouldn't wear a costume, I couldn't imagine him wanting to wear one. And seeing that the greater part of my wardrobe is black [It's a sensible colour. It goes with anything. Well, anything black.], then his tastes in clothes echoed mine on that score as well.
From the afterword to Preludes and Nocturnes. That last part about wearing black had also come up in Gaiman's Tumblr

For the record, this is the black robe with flame motif Gaiman is mentioning: 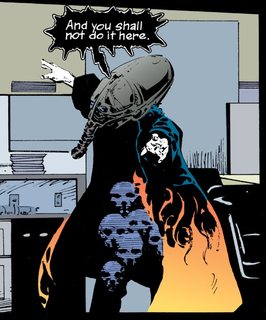 Left - from "Sleep of the Just"; middle - from "Dream a Little Dream of Me" (Constantine even joked that he wouldn't get on public transport with Morpheus looking like this); right - from "Sound and Fury"; all collected in Preludes and Nocturnes.

But according to Mike Dringenberg (the inker and then penciller of the first 8 issues), none of the characters were copied directly from real people:

None of the characters are direct renderings of individual people; they're composites emerging from my memories;
src

I think there's only one character that has explicitly been stated to be mostly inspired by a real person - Death: 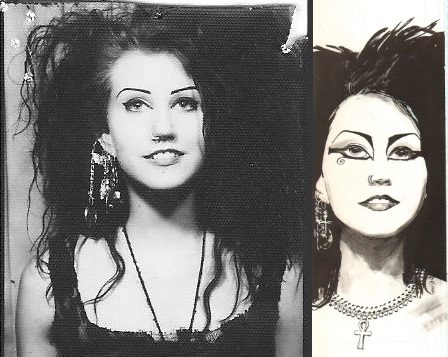 Coming back to Morpheus, he's never stated to be based on, or even to intentionally resemble Neil Gaiman. He was a sort of collage of many people the artist knew back then:

The Sandman himself is even more of a composite. Certain well-known people influenced the design -- his mop of hair came from Robert Smith and ballet dancer Farukh Ruzimatov was always in my mind for his dramatic physique, but face wasn't so much Bauhaus' Peter Murphy, but rather a type of English face, of which Murphy's is a shining example. That face can be averaged between Dirk Bogarde, as he appeared in the 1959 version of A Tale of Two Cities; the young Terrence Stamp of Billy Budd, and David Bowie in the '70s, with a dash of Syd Barrett.

As for his bearing, he's an amalgam of half a dozen guys that I knew slightly in the old punk/ club scene and didn't want to know any better: they were all tall, pale, beautiful, and serious sleazebags who used women like toilet paper.
Ibid; emphasis mine.

I can see Morpheus resembling the people Dringenberg mentions:

Gaiman even mentions in his interview in The Sandman Companion that he also wanted Morpheus to have a rock-star appearance:

I wanted him to look like royalty. In the late 1980s, kings and queens were dressing and behaving like ordinary people, and I felt it was celebrities - and especially rock stars - who were our true royalty. I made some drawings with that in mind, and with the Sandman dressed in a black kimono I ran across in a book of Japanese design. I sent those off to Sam Kieth, who was the first issue's penciller, and Sam developed the Dream we see in issue 1. The Mike Dringenberg, who was inking the first issue, said, "Hey, he looks like Peter Murphy from Bauhaus." Dave McKean and I got some Bauhaus videos and immediately saw that Mike was right; and Dave ended up making the central image on the cover of Sandman 1 a Peter Murphy-like face.
The Sandman Companion, "Secret Origins - Origins of Dream", page 236.

The closest thing I cold find for Morpheus to resemble Gaiman was like this (the general shape of the face and all the hair):

Left and right - Morpheus, from "Sleep of the Just" (Preludes and Nocturnes) and Season of Mists chapter 3, respectively; middle - Neil Gaiman somewhere in 80s or 90s (src).

Neil Gaiman himself certainly doesn't believe Morpheus was modeled on him:

Q: You look very much like Dream of the Endless. Is this purposeful?

A: I don’t think I looked like Dream while I was writing him. Maybe it’s a similar phenomenon to the way people grow to look like their dogs.
From Neil Gaiman's Tumblr.

Q: I have just started reading The Sandman and I had a question. I know you said that Dream's wardrobe is based on your own but is his appearance based on you as well? I personally think the resemblance is uncanny.

A: I don’t think so. This is what I looked like when SANDMAN 1 came out, after all…

(Photo of Mike Dringenberg and me at the first ever Sandman signing, at Jim Hanley’s Universe. Note the non-existent crowds, and the piles of unsold copies of Sandman #1.) 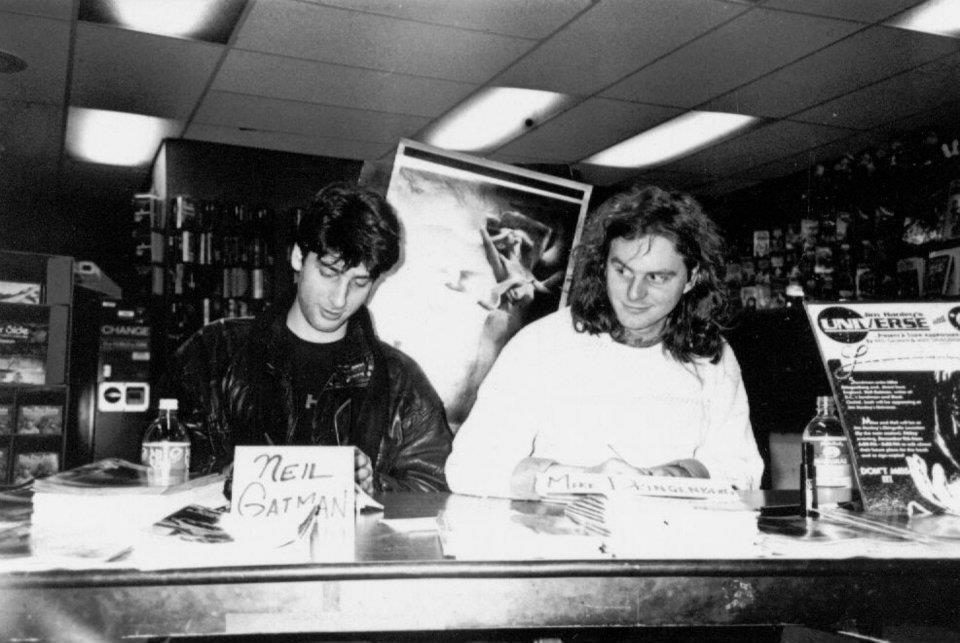 Notice that with all of these, some traits seem similar, but Morpheus doesn't really look like any of them. My point is, sure Morpheus seems to look like Neil Gaiman - Gaiman was there, he's the creator of the character - but he also looks like a lot of other people who influenced the artist at that time. And if one was to look at later issues, Morpheus looks even less like Gaiman or anyone mentioned:

He retains the basic traits, but it becomes harder and harder to identify him with any particular person.

But it's only fair to point out that some artists apparently did use Neil Gaiman for their depictions of Morpheus. Here, it's Marc Hempel, who illustrated The Kindly Ones. 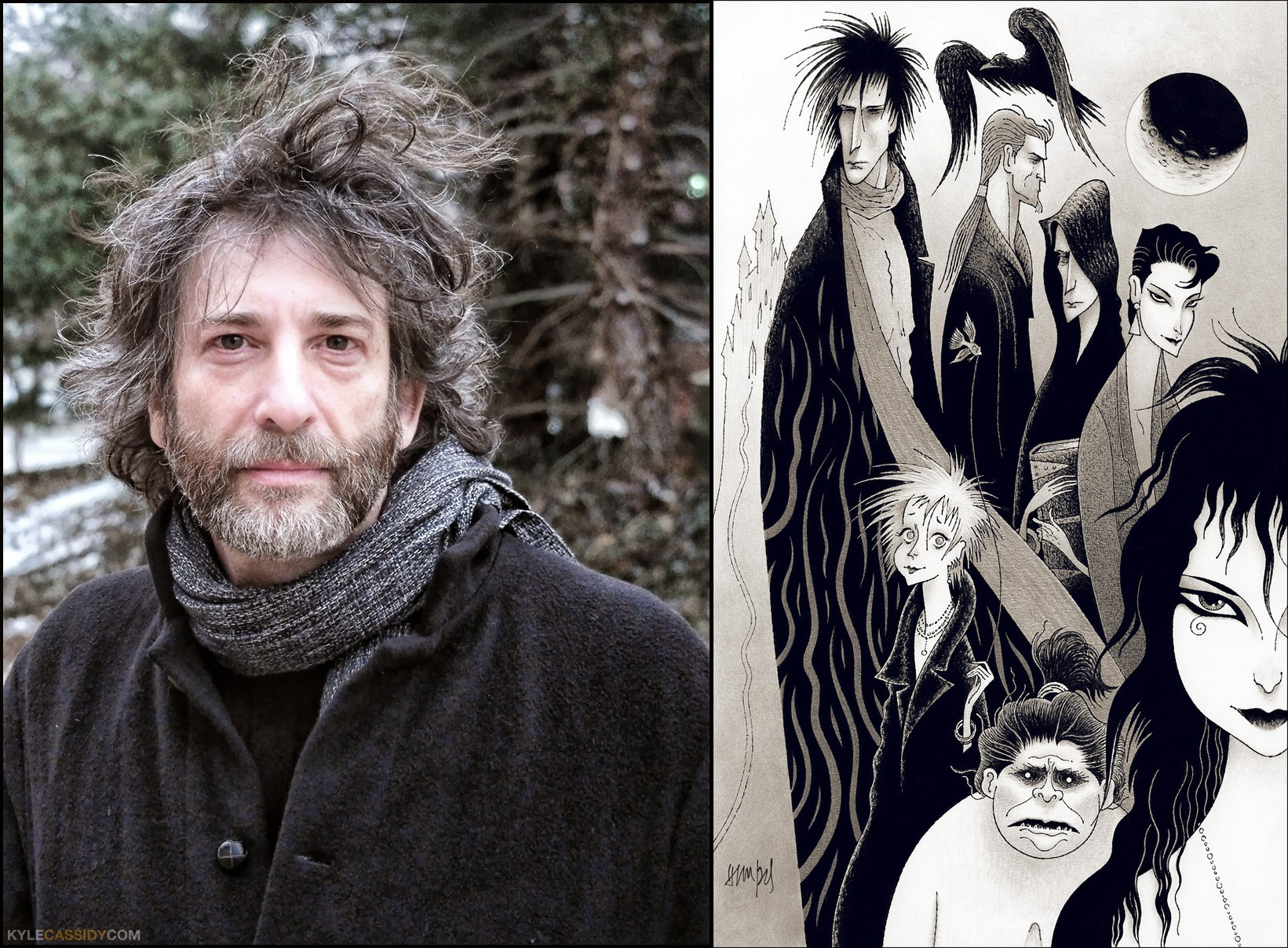 Take my word for it or not, but I'm the writer of the article "Mytho-Auto-Bio: Neil Gaiman's Sandman, the Romantics, and Shakespeare's The Tempest." The study focuses the reasons why Gaiman intended to finish Sandman with "The Tempest" by representing Shakespeare completing his bargain with Morpheus in writing The Tempest, which is supposedly Shakespeare's final play. I argue that he uses an autobiographical simile in the issue.

Beginning in the nineteenth-century, criticism typically identifies autobiographical dimensions of Shakespeare in his character Prospero, from The Tempest--Coleridge being one such critic. There are many instances where such criticism reads Prospero's monologues as instances where Shakespeare speaks through the character, especially within the final epilogue, wherein he bids "farewell" to the stage. I argue that Gaiman titles his intended final issue "The Tempest" to connect with Shakespeare writing his supposed final play.

To quote from the relevant portion of my article:

It is within The Tempest’s epilogue where one may be drawn to an understanding of how Shakespeare assumes Prospero’s persona to announce his exeunt from The Globe:

Now my charms are all o’erthrown,
And what strength I have’s mine own,
Which is most faint….
As you from crimes would pardon’d be,
Let your indulgence set me free.

These portions are traditionally read as Shakespeare’s final curtain call; Prospero’s magical charm are Shakespeare’s ‘charms’, or imaginative power, which has lost strength. Shakespeare has exhausted his charms; he is tired and seeks respite.

In response to Gallifreyan's comment: no one ever said Morpheus was a superhero (I certainly do not), but I wanted to make clear that although the series is connected to the larger DC Universe, Morpheus is not a superhero but distinctly connects with the model of the Romantic hero--in the late-eighteenth and early-nineteenth century sense.

It seems it is because many people believe that Dream is Neil's alter ego, probably because at least in some panels Morpheus DOES look like Gaiman: Empire's "50 greatest comic characters" states that

Over the run, Dream's appearance has been based on David Bowie, Bauhaus' Peter Murphy, The Cure's Robert Smith and author Neil Gaiman.

Gaiman himself denies that he and Dream are the same person. Here, in an interview with Rolling Stone:

Q: Is the character sort of an idealized version of yourself?
God, I hope not. The only thing that I think is particularly funny is that when I was a young man with very normal hair, I was writing Sandman with huge, weird, crazy hair.

And for Edmonton Journal:

He's a lot like me, only with an immortal's superpowers and no sense of humour of any kind," Gaiman said. "Hmm. So in fact, he isn't anything like me at all, but he does have very messy hair. That was a great point of correspondence between me and the character. He's much paler than I am, too."

Here is an interview with The Guardian:

Years later, Karen [DC Editor] said: "Of course, Dream is you." I said: "No, I've got a sense of humour." I suppose he looks like me, though. But that's one of those peculiar things where you gradually start to look like your dog.

Although this study1 suggests, that indeed that Dream IS Gaiman (sadly, I have access only to abstract)

I maintain throughout the article that Gaiman designs Morpheus with Romantic understandings of Prospero and, drawing from the larger DC Universe of superhero motifs, how Gaiman constructs Morpheus as an alter ego. Rather than a superhero, I argue that Morpheus is a Romantic hero bearing traces of the author’s autobiography.

So they have some similar looking clothing and, over the years, have occasionally resembled one another. Hardly a compelling argument. It's both common and normal for a character and creator. I suspect, if we wanted to, we could find some parallels with the various artists who've drawn Dream, over the years. Who hasn't tried to be a pale, thin, black-clad-rockstar-looking-person at some point in their lives?

7
Was Neil Gaiman influenced by Heinrich Heine?
12
What's the significance of the witches' name change in Sandman?
8
Why does Night say Desire and Morpheus are alike?
8
In “The Sandman”, what are nightmares for?
9
Did young Dream and Death really look like this?
2
Why does Lucifer mention Raguel and Sandalphon as possible rebels among the angelic host?
13
Why are comic books listed under PN (“general literature”), and not under authors' respective categories in Library of Congress system?
6
Why are the magicians who captured Morpheus “rubbish”?
8
Does Neil Gaiman's “Mouse” criticise abortion?