Is the house plan in Anne Frank's diary an artistic rendition, or is it sketched by Anne?

There is this image in the "Friday, 9 July, 1942" section of Anne Frank's diary; a design of the house which is popularly called the Secret Annex. 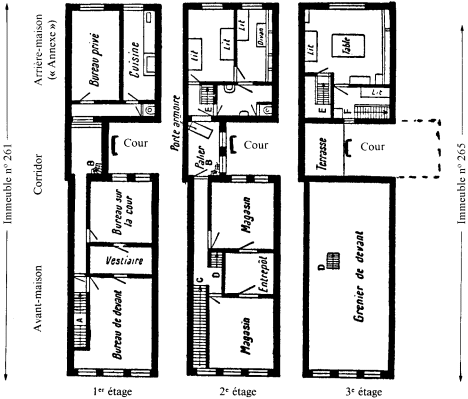 Did Anne's original diary have a (rough) sketch of the Secret Annex, or was it completely a rendition from the details from the diary?

While I can't speak with authority as to the contents of the original diary, I'd suggest that in answering the question as posed, 'Is the house plan in Anne Frank's diary an artistic rendition, or is it sketched by Anne?' and 'Did Anne's original diary have a (rough) sketch of the Secret Annex, or was it completely a rendition from the details from the diary?', there are several avenues to be explored.

a) is the plan illustrated in the question in Anne's hand?

b) can we find any trace of an 'rough sketch' in Anne's hand?

My immediate response to that, as a design professional who spent many years at a drawing board before computer drafting took over, I would not regard that as the plan of a 15 year old girl in Anne's circumstances. The drawing utilises standard drafting conventions and use of lettering stencils. It seems unlikely these would be taught to girls of Anne's age and era, or that she would have access to the requisite tools.

b) Can we find trace of a 'rough sketch' in Anne's hand.

My efforts here are necessarily limited, but internet searches for images of the manuscript do not readily turn up such a sketch. In fact, widening the search I could not find any drawings of Anne's at all. I can find no reference either to the existence of Anne's own plan, which one feels would have been made much of and pored over by conspiracy theorists if no-one else. However, this is not conclusive.

I am not in a position to comprehensively answer this question as I've not read the text recently enough or with attention to this detail. What I did see from looking at the plan was a detail that seemed improbable for a plan constructed from references in text rather than a measured survey, and this led me to look much more closely at the way the landing area with the bookcase fits together in regard to what the plan shows.

The left hand wall of the landing offset by a few inches from the left hand wall of the corridor which leads to it from the frontage building. While it is far from impossible that Anne would notice this, it seems quite unlikely for her to have recorded it. This can obviously be tested by examining the text, but also relies on knowing whether this detail of the plan is correct in regard to the building.

From what I can see from photographs of the entrance to the annex as it exists now, the recording of the landing is incorrect, or has at least been simplified. The plan shows the swinging bookcase being closer to the wall on its hinge edge than wall with windows, while photos clearly show it closer to the opposite wall with the windows. However, the two different photographs of the bookcase on the linked site almost look as though the left hand wall has been realigned at some stage between the images being taken. If we look at the ceiling area where what appears to be the corner of an adjacent room intruding into the landing, the side of that projection which is perpendicular to the windows, appears shorter in the colour photo than in the black and white, the undecorated areas on the black and white being boxed in in the colour. This diversion into the shape of the landing doesn't effectively prove anything about how the hallway looked in Anne's period of residence, all it does indicate that we can't be fully sure without going into very great research detail, exactly how this area looked when Anne knew it. If walls have moved between photographs, how else might that corner with its awkward projection and slight recesses in the stonework have been boxed off at other times?

This is the question which I think can be answered most definitively. There would be no need to construct a plan from textual descriptions. The building still stands, Otto Frank survived. The text is not the only source.

Taking these four avenues together, I see no evidence for a plan sketched by Anne herself, but no need to construct one from her descriptions either. Certainly the plan pictured in the question is highly unlikely to be drawn by Anne. The use of conventions such as arrows indicating direction of rise on the stairs, wash-hand basins depicted as curved when the actual artefacts are rectangular, the use of stencilled lettering, the labelling of the rooms in French, certainly militate against this being Anne's own work.

Before answering the question, I would like to point out that there are four versions of Anne Frank's diary. To avoid repetition, I refer to an earlier answer about the diaries, where I listed the four versions.

The diaries (or at least a version edited by Anne's father Otto Frank) were first published in 1947, but the first critical edition was published only in 1986: De Dagboeken van Anne Frank, edited by David Barnouw and Gerrold van der Stroom (Rijksinstituut voor Oorlogsdocumentatie) Den Haag & Amsterdam, 1986. This critical edition (800 pages long) takes all versions of the diary into account. It also contains images of pages written by Anne to compare her handwriting in various manuscripts - mainly in order to defend the diaries against the accusation of forgery. (These accusations came mostly from right-wing extremists.)

This critical edition of the diaries (or at least the German translation to which I have access) does not contain the floor plan from the question. However, the same floor plan (with labels in Dutch) is also included in the Dutch edition Het achterhuis: dagboekbrieven 12 juni 1942 - 1 augustus 1944 (Amsterdam: Prometheus, 2010) in a section with images in the middle of the entry for 18 january 1944. However, Anne's description of the building (not just the part where they are hiding) can be found in the diary entry for 9 July 1942. In this edition of the diary, the floor plan is not attributed to anybody (neither below the drawing, nor on the copyright page at the beginning of the book), nor explicitly linked to any diary entry. For this reason, it is probably not a drawing by Anne.

However, the house still exists (even though it came close to being demolished in the 1950s), so its accuracy can be checked at Prinsengracht 265 in Amsterdam and there was no reason to base the drawing solely on Anne's diary entry.

What you see in the floor plan are the three upper floors of the entire building, not just the secret annex, i.e. without the ground floor and the attic. While the Franks, the Van Pels and Fritz Pfeffer lived in the secret annex, the ground floor and the three upper floors in the front part of the house remained in use by the company that Otto Frank had started before the German invasion.

On the level marked as 1er étage, you find "bureau de devant", which was the office used by Miep Gies, Jo Kleiman and Bep Voskuijl, the "bureau sur la cour" (the office used by Victor Kugler), and at the back a private office ("bureau privé") and the kitchen ("cuisine"). In the narrow passage between the front part and the back part, you find the flight of stairs that leads to the famous bookcase-door ("porte armoire" on the "2e étage") that hid the access to the secret annex.

After the eight people who were hiding there were arrested, the furniture and other objects were removed by the company Puls. When Otto Frank returned as only survivor after the war, the annex was empty, and he always wanted this emptiness to be preserved. (Furniture was only put back in the secret annex on specific occasions, i.e. for filming or photographs.) Restoration was necessary before the building could be opened to visitors, but the floor plan remained the same, except for changes on the ground floor.

A semi-three-dimensional rendering of the floor plan can be found in several books, e.g.

Not the answer you're looking for? Browse other questions tagged dutch-literature anne-frank the-diary-of-a-young-girl or ask your own question.

5
In Anne Frank's Diary, what does this quote mean? "Who besides me will ever read these letters? From whom but myself shall I get comfort?..."

5
In Anne Frank's Diary, what does this quote mean? "Who besides me will ever read these letters? From whom but myself shall I get comfort?..."
1
First Dutch children's bible