Does part four of Doll's House add to the narrative of the volume?

The second volume of The Sandman tells the story of Rose Walker and her relationship with Dream as the vortex of the modern era.

While I was reading the volume, I was initially confused about how the prologue (#9 "Tales in the Sand") and Part Four (#13 "Men of Good Fortune") related to the narrative of the complete volume. While there are volumes of The Sandman that don't have a single story line (like the third volume, Dream Country), I think it's clear that The Doll's House does.

By the end of The Doll's House, I think it's pretty clear that the prologue's purpose was to introduce Desire's conspiracy against Dream that played out over the course of the volume. However, I still wonder about "Men of Good Fortune" -- it certainly connects to other parts of the overall storyline of the Sandman (for example, setting up a working relationship with Will Shakespeare for #19 "A Midsummer Night's Dream"); does it connect to the particular storyline of The Doll's House? I think it might fit better among the other standalone stories of Dream Country, rather than in the middle of the cohesive narrative of The Doll's House.

("Men of Good Fortune" doesn't really fit in well in Wikipedia's description of the plot.)

I think it's important to remember in this case that The Sandman was originally published in monthly issues; they were connected by overarching stories, but weren't collected in volumes. Thus I replace the question "Does part four of Doll's House add to the narrative of the volume?" with the question "Why was the story 'Men of Good Fortune' collected in The Doll's House?".

The answer appears to be [somewhat trivial]: Morpheus' most recent meeting with Robert Gadling takes place roughly at the same time as the main story arc of Doll's House.

It was important to have "Men of Good Fortune" appear exactly at this point, because this is when it is set chronologically.

Assuming you read the monthly issues, source of possible confusion becomes clear: Gaiman says that the end of the issue #12 ("Playing House") should have had "Next: The Prior Engagement" written in the end. Editor or typer took it out from the issue, since the following issue (#13, "Men of Good Fortune") does not have that title. My digital trade paperback has the notice: 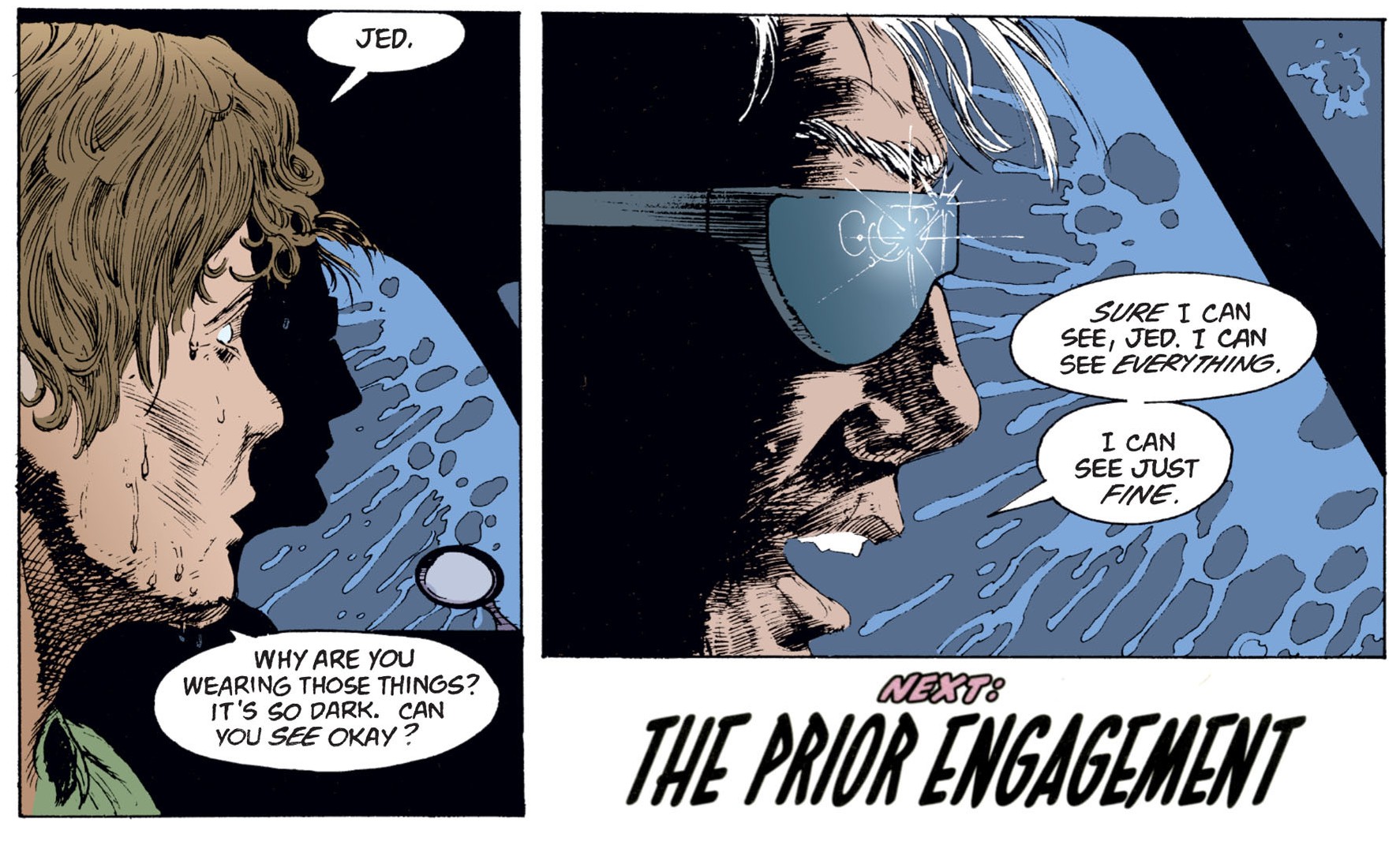 Here's the maths: Robert and Morpheus met in the year of our Lord 1389, and agreed to meet once in a hundred years: 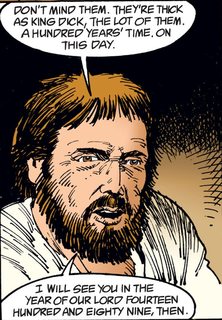 Thus we know that they must have met in 1989. We can compare that using the dates from the prologue of Doll's House, where Morpheus, immediately after the events on the Skerry, goes to the Threshold, Desire's realm, and says Unity was raped 50 years before that (i.e. it should be 1939): 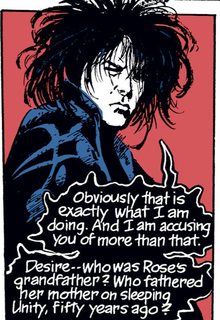 Going back to Preludes and Nocturnes, however, it all gets confused: we can conveniently see that Unity was not raped in 1939, but in 1932: 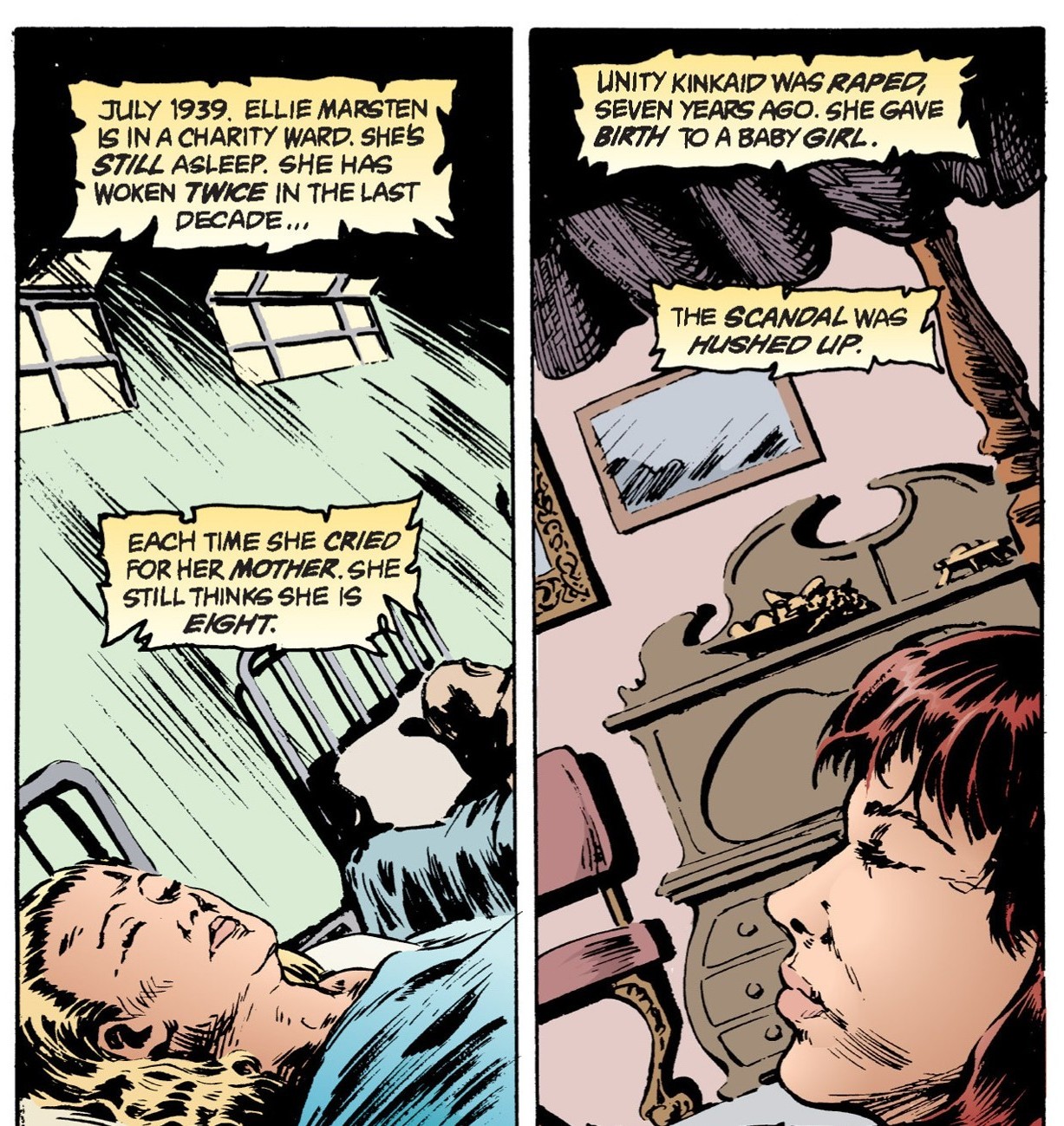 If we change "years" to "months", this panel fits into the timeline.

Gallifreyan: Hi there! A question about chronology in The Sandman: is this panel's timing wrong? Shouldn't Unity have been raped in 1939?

Neil Gaiman: I think Morpheus is approximating. And probably should have rounded up, not down. But he was in a glass prison while it was all happening.

So it appears that Shokhet was right again saying that the number 50 does not have to be precise; I was right too, saying that 57 rounds up to 60 instead of 50.

And it makes sense for the events of Doll's House to take place in 1989. Consider this panel from The Kindly Ones: 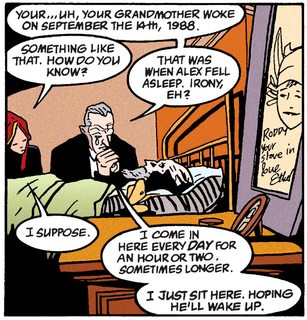 The solicitor says Unity awoke in 1988, same time Alex Burgess fell asleep, i.e. when Morpheus broke out and put him in a nightmare. Thus it is chronologically more probable for the events of Doll's House to be set in 1989 (i.e. Preludes and Nocturnes ended somewhere between 1988 and 1989). Either Morpheus doesn't know that 57 should be rounded up to 60, or that panel from Preludes and Nocturnes must be confusing something.

The Sandman Companion by Hy Bender (page 44) raises an interesting point here: during his encounter with Brute and Glob (in "Playing House"), Morpheus tells Hippolyta Hall that he has "a prior engagement". 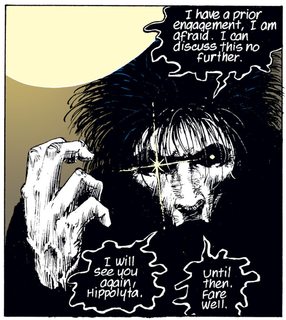 The next story after that is "Men of Good Fortune". Thus, Bender makes the conclusion that the prior engagement is Morpheus' meeting with Robert Gadling.

This is backed by Gaiman's words on those pages:

N.G: [...] The prior engagement referred to, of course, was the Sandman's centennial appointment with Hob Gadling in 1989; and it was genuinely important for Dream not to miss it, because it was the meeting in which he affirmed their friendship.
The Sandman Companion, chapter 4, page 54.

Also, in the same chapter 4 of The Sandman Companion, Gaiman asserts multiple times that he intended for their meetings to take place in 1989.

@Shokhet is also right to assert that the comics were supposed to be set in the year they were published, and the same chapter for the companion confirms that Gaiman was writing them in '89.

One could, however, ask: "Why not collect the story in some other volume, like, say, Fables and Reflections?". And the answer is - it'd be too late and crammed. Hob Gadling's story must be told before further volumes, and though dates may be fuzzy, most evidence shows that it fits into the chronology of Doll's House best.

While discussing this question in chat, Gallifreyan mentioned that he had wondered about the significance of Hob Gadling, arguably the protagonist of "Men of Good Fortune." We both mentioned our pet theories (Gallifreyan's: as a foil to Morpheus; mine: to show how Dream's relationship with humanity changes over time), and that got me thinking about how I might answer that question should Gallifreyan choose to ask it. 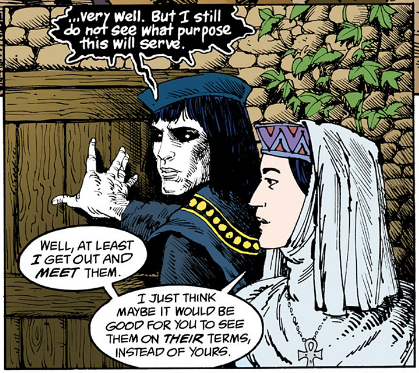 Death (to Dream): Well, at least I go out and meet them. I just think maybe it would be good for you to see them on their terms, instead of yours.

At this initial meeting, Dream is not very interested in individual lives, discussing other matters while his sister is intently people-watching. Death tells him "Shush, listen to the people" (page 3). At their first reunion, Dream insists that he only meets Gadling because "it might be interesting" (pages 4-6), treating Gadling more like an "interesting" specimen than as a friend or acquaintance.

In their 19th Century meeting, Dream is greatly offended by Hob's implication that the Endless might need the friendship of a human. Before he storms out, Hob repeats the claim, and says that if Dream returns in a hundred years, he will be vindicated.

Panel 2
Hob: Tell you what. I'll be here in a hundred's year time. If you're here then, too -- it'll be because we're friends. No other reason. Right? (Right?)

In the final meeting of Dream and Hob, in 1989, Dream makes it to his meeting with Hob. (Although he may have to rush to make this "prior engagement," mentioned on the penultimate page of "Playing House," the issue that immediately precedes "Men of Good Fortune.") 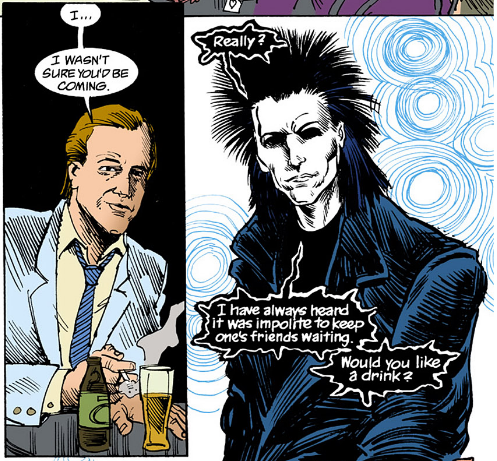 Dream: Really? I have always heard it was impolite to keep one's friends waiting. Would you like a drink?

So we see that while Dream didn't originally care about individuals, by the time of his most recent meeting with Hob Gadling, he had developed the ability to call a human "friend," along with the ability to recognize and care for an individual member of humanity. (This may be related to Dream's 70-year imprisonment.)

This is important to the later parts of The Doll's House, because although Dream clearly cares about his job and is engaged in protecting the dreaming well-being of large populations, he previously didn't care much about individual lives -- this was what allowed him to kill a vortex without pause. However, when Rose's turn comes to die at Dream's hand, he delays. Even though he knows who and what Rose is, he makes no move against her (and even goes out of his way to preserve her life) until she begins to cause problems in the Dreaming. Even then, he pauses to explain to her why she must die (and Rose even complains that he talks to much -- "Forchrissakes! Look, just do it. Stop apologizing and just do whatever you're going to do. Okay? Just do it."1)

An argument might be made that this is part of what caused Dream's reluctance to end Rose's life. And a reader would be entirely unaware of this part of Dream's struggle without having watched the evolution of Dream's relationship with individuals over the course of the centuries in "Men of Good Fortune."

8
In "The Sandman", what are nightmares for?

9
What does Dream's ruby represent?
9
Is the story of "Tales in the Sand" (or its form) faithful to traditional African stories?
8
In "The Sandman", what are nightmares for?
42
Why does "Watchmen" use the 9-panel grid?
2
Why does Lucifer mention Raguel and Sandalphon as possible rebels among the angelic host?
6
Why does Lung the Quick's tombstone read "No Unicorns in Heaven"?
10
Why is the Omani trinket salesman story "female", and what does female mean here?
8
Does the magic potion provide invincibility or only superhuman strength?
17
What does Wednesday mean by "the flowers in your hair are optional"?