What is an Akhmatovian nose?

I, Milena by Oksana Zabuzhko (in Your Ad Could Go Here) contains the following quote:

If anyone has forgotten, let me remind you: Milena talked to jilted women. There were old ones among them and young ones, pretty and ugly, smart and not very (Milena did not allow the utterly stupid ones into the studio): a peroxide blonde interpreter—fat legs, a short skirt, a plastic doll’s light-colored eyes—talked about how many men were fighting over her just then, while a PhD in chemistry, with a nose that could be called Akhmatovian if she’d known how to wear it, insisted aggressively that at that particular time she was completely happy, and only once did she tear up as she was taking a handkerchief out of her purse, fall silent, sniff, and stuff it back in again (Milena did not cut the shot, not least out of a vague hope of moving the chemist’s ex-husband to pity, in the event he was watching the broadcast).

This appears to be a reference to Russian poet Anna Akhmatova, but I'm not sure. Beyond that, can someone explain exactly what it means to have an Akhmatovian nose?

The reference is, as your researches suggested, to the poet Anna Akhmatova Gorenko.

She had a nose which called attention to itself. While not unique in terms of human nasal ornaments, it was a nose which many women might find difficult to live with. In an article about the poet the Pushkin House cultural centre's website says of an iconic photograph by Moisei Nappelbaum: 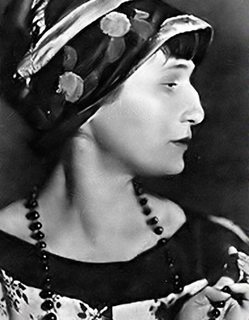 The photo is taken in profile, which emphasises Akhmatova’s aquiline nose. On the other hand, it reminds one of a monarch’s head on a coin, and automatically connotes power and authority. In both Altman’s and Nappelbaum’s cases, we can see how Akhmatova’s myth worked. It was her mystical, monarchist aura that first appealed to her admirers, who in turn went on to perpetuate her myth.

This evokes images of coins such as those depicting Octavius and Mark Anthony. 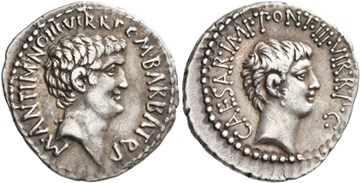 My reading is that the chemist may have found her nose to be unfeminine, fitting for ancient Caesars and commanders rather than modern women, and perhaps felt self conscious about and burdened by it rather than wearing it proudly as Anna Akhmatova apparently did and embracing it as a part of her personal iconography.

It should also be noted that admirer's of the Aquiline Nose don't always value it purely for its aesthetics, the Wikipedia article on Roman Noses makes reference to the nose-type's significance in racialist discourse.

In racialist discourse, especially that of post-Enlightenment Western scientists and writers, a Roman nose has frequently been characterized as a marker of beauty and nobility, as in Plutarch's description of Mark Antony. The supposed science of physiognomy, popular during the Victorian era, made the "prominent" nose a marker of Aryanness: "the shape of the nose and the cheeks indicated, like the forehead's angle, the subject's social status and level of intelligence. A Roman nose was superior to a snub nose in its suggestion of firmness and power, and heavy jaws revealed a latent sensuality and coarseness". In the twentieth century, proponents of scientific racism, such as Madison Grant and William Z. Ripley, claimed the aquiline nose as characteristic of the peoples they variously identify as Nordic, Teutonic, Celtic, Norman, Frankish, and Anglo-Saxon.

That's quite a lot to balance on the end of one nose, so it is perhaps understandable if the chemist preferred to bury hers in a handkerchief sometimes.

18
What is the bananafish? What does it represent?
10
Had people related the work of Gogol before "The Nose"?
12
What word did Updike have in mind here?
2
What did Herman mean when he claimed that operators monitor people's conversations?
2
What is the Ukrainian equivalent of a community college?
7
What is a "more bankable nationality"?
0
What is swamp milk?