Did the recipient receive twelve partridges or just one?

In the song The Twelve Days of Christmas, did the recipient receive a single partridge or did they receive one partridge each day for twelve days?

Here are the relevant lyrics:

On the First day of Christmas my true love sent to me
a Partridge in a Pear Tree.

On the Second day of Christmas my true love sent to me
Two Turtle Doves
and a Partridge in a Pear Tree.

On the Third day of Christmas my true love sent to me
Three French Hens,
Two Turtle Doves
and a Partridge in a Pear Tree.

TL;DR: The text does not say.

The feature of the text that most strongly suggests that my true love might have sent twelve partridges is the word ‘On’ at the start of each verse. But this word is an interpolation, and does not appear in the earliest printed version: 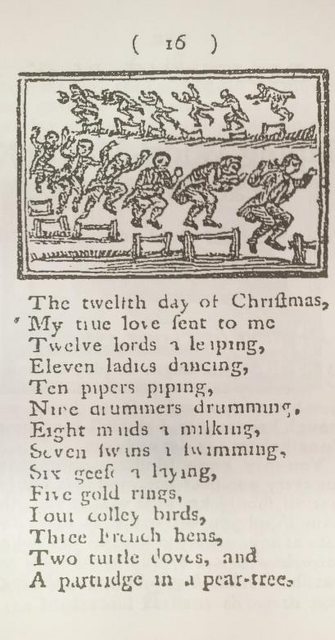 The question asks us to treat the song as if it were documentary evidence for a fictional universe in which someone’s true love sends them a number of presents during the twelve days of Christmas. But turning the question around, what do we gain by treating the song in this way? The song does not seem to be describing a fictional situation in a documentary way, and to insist on that approach just runs into the limitations of the text.

A look at the origin of the song gives us some insight into why the “documentary evidence for a fictional universe” approach doesn’t seem very productive in this case.

“The Twelve Days” was a Christmas game. It was a customary thing in a friend’s house to play “The Twelve Days,” or “My Lady’s Lap Dog,” every Twelfth Day night. The party was usually a mixed gathering of juveniles and adults, mostly relatives, and before supper—that is, before eating mince pies and twelfth cake—this game and the cushion dance† were played, and the forfeits consequent upon them always cried‡. The company were all seated round the room. The leader of the game commenced by saying the first line. […] The lines for the “first day” of Christmas was said by each of the company in turn; then the first “day” was repeated, with the addition of the “second” by the leader, and then this was said all round the circle in turn. This was continued until the lines for the “twelve days” were said by every player. For every mistake a forfeit—a small article belonging to the person—had to be given up. These forfeits were afterwards “cried” in the usual way, and were not returned to the owner until they had been redeemed by the penalty inflicted being performed.

Readers ought to recognise this game as resembling other cumulative memory games, such as the 20th century “I went to the zoo and I saw …” This origin adequately explains why the presents are repeated on each day of Christmas, without needing to go into the question of whether twelve partridges were sent, or only one.

“The Twelve Days of Christmas” is just one of a group of similar cumulative recitations:

In Scotland, early in the nineteenth century, the recitation began:

The king sent his lady on the first Yule day,
A popingo-aye [parrot];
Wha learns my carol and carries it away?

If the song is treated as a factual account, the only interpretation is that one partridge is sent on each day of Christmas, for a total of 12 partridges. The true love sends a partridge on the first day, another on the second, another on the third, and so on. If the song lyrics were "by the second day of Christmas", one could interpret it as a cumulative list over all days, but the lyric is describing what is sent "on" each day individually. If I mail you a package and a letter on Dec 26, there is no reasonable interpretation where I mailed the package on Dec 26 and the letter on Dec 25.

Not the answer you're looking for? Browse other questions tagged song-lyrics or ask your own question.

10
What is the history of the universe/canon/word-of-god approach to literature?

6
What's the symbolism in The Twelve Days of Christmas?
2
Why is "On Most Surfaces" titled the way that it is given that only one surface appears in the song itself?
3
Why did Bob Dylan choose Highway 61 for "Highway 61 Revisited"?
1
What is meant by "strength" in Anathema's "One Last Goodbye"?
5
What are the "garment thin" and the "prize" in the song "The Ballad of the Shape of Things to Come"?
4
Who classified Rabindranath Tagore's lyrics into the six standard categories?
2
Why is the narrator the one leaving in "Streets of Gold"?