What is the name of this book about soccer and oranges?

I read a book in the mid to late nineties that I don't have any clue how to search for. Here are the things that I remember from this book:

If I can think of any more details, I'll add them.

You are thinking of Tangerine written by Edward Bloor, published in 1997. The Goodreads summary (which I remember as being the blurb on the back of the book) makes it sound like the plot is supernatural:

In Tangerine, underground fires burn for years and lightning strikes the same field every day. Strange things happen here -- but nothing is stranger than the secrets Paul discovers about his brother, his new group of friends, and his own dangerous past. 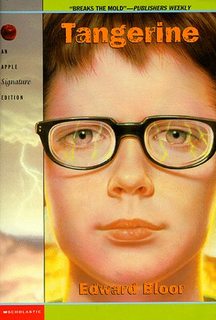 But the summary on Wikipedia makes it clear that the book is entirely a domestic drama of mundane origin.

Before the beginning, when Paul Fisher is in kindergarten. One of Erik's friends calls Paul "Eclipse Boy". (Erik is Paul's brother) On Paul's first day of kindergarten, he is bullied by 5th graders about him being legally blind. At the beginning of the novel and Erik doesn't defend him letting him get teased.Next, Erik and Paul move houses, with their parents, from Houston, Texas to Lake Windsor Downs in rural Tangerine, Florida. Erik, the older son, looks forward to a football scholarship at the university of his choice. Paul, the younger son, is visually impaired and considered blind, but plays soccer. His family credits his visual injury to a solar eclipse, which he does not remember. Soon after they unpack, Paul goes for a tour of his new school, where characters Mike Costello and his brother Joey are introduced. One day at football practice, Mike Costello is killed by lightning; whereupon Erik and his friend Arthur Bauer tell jokes after hearing the news, even though Mike was one of their teammates. On his first day of school, Paul meets Coach Walski, the coach of the soccer team, and tries out for the team, but is later told that his visual impairment prevents his eligibility, and blames this on his mother's revelation of the impairment to the school administrators.

Throughout the story, houses in Paul's neighborhood are fumigated for termites many of the houses are robbed by Erik and his friend Arthur.

Paul runs back to his house, where a confrontation with a furious Arthur and Erik causes Paul to finally fully recall the memory he had been repressing—after spray-painting a wall and wrongfully assuming that Paul had turned them in, Erik restrained Paul while Victor Castor (his lackey at the time, mirroring Erik's relationship with Arthur) sprayed paint into Paul's eyes as punishment. Paul confronts his parents about their concealment of the event. His mother cries and they admit to lying about the eclipse, stating that they were only trying to ensure that Paul never hated Erik.

Back at the school, Paul and his mother meet with the principal, who informs him that Tino and Victor have been suspended for three weeks for attacking a student. Since Paul attacked a staff member, he is expelled from all public schools in the county. As Paul and his mother leave the school, the kids outside express approval towards him for his actions defending Tino and Victor.

If you want even more matching points, Schmoop has a pretty comprehensive summary of the book chapter by chapter.

10
Teenager in orphanage or prison

12
Story about two siblings who run away from home and stay in a museum at night
8
Book about a boy blinded by a firecracker
9
Goosebumps-esque story about a group of kids visiting an alternate black and white world
10
Book about a boy who develops several accidentally destructive science projects
10
Young adult fantasy book about a girl with gray eyes and powers related to metal
4
Book about a mentally retarded girl being sexually assaulted by boys at her school, and one of them coming to grips with what he's done