Fairy tale story in two parts: “as I first heard it” and “when I wanted to know more”

I read this book some years ago, probably around 2010, though it was definitely older than that. It had a fairly short and simple title, of the kind one might expect to find on a fairy tale: "The Lost World" or "The Princess's Journey" or something in that vein. My copy was hardback, the cover mainly white with a stylised drawing running across both back and front, featuring a few people, one rather prominently on the front, and a landscape with mountains.

At first I thought it might have been written by Philippa Gregory, but I checked through her bibliography and couldn't see it there. The author's surname definitely began with an early letter in the alphabet (A to H) - I remember that from where the book was in my bookcase - and it was probably written by a woman. Edit: on further reflection, I think the author may have been called Maria, with a surname starting with G and possibly Gl.

What was the name of this story? I'm sure I'll know it when I see it, but it's still eluding me.

The Land Beyond by Maria Gripe.

I was thinking about this book again, and went into a sort of meditative state, seeing the book's cover in my mind's eye and trying to recall the title. It wasn't quite "The Lost World" ... but maybe something similar? Eventually the phrase "The Land Beyond" floated into my mind, and I thought why not give it a try. The name "Maria Gripe" also floated into my mind around the same time, but I thought Gripe sounded like an odd name, and just Googled "The Land Beyond" Maria. Voila!

The Land Beyond is the same story, told twice. The first is a simplistic version, written in (or translated into) the nonsensical style of a 19th century fairy tale, complete with symbolism and allegory. An explorer walks into a kingdom and tells the king he’s found a land that does not appear on any map. Other characters try to find it. The second story retells the first, and expands it, which allows all of the unnamed characters to have long, dull conversations about life. There is even more symbolism, allegory and political satire.

There's a slightly longer review here. This is the cover I remembered: 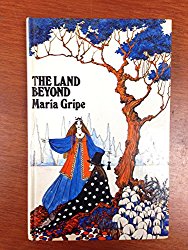 13
A girl, told that it's wonderful to live in Wales, goes off to live in a whale
12
Story about two siblings who run away from home and stay in a museum at night
1
Hardback book, read in the late 1980s, involving a wandering samurai investigating a cat demon tearing peoples' throats out around a village
7
Trying to find a story of a man who strapped a magnet to his forehead, has visions
20
In what Chinese fairy tale does a painter disappear into his own painting?