Here is a poem by William Blake with some accented è's (Nurse's Song, 1789). How is this è pronounced? What is the background as to why the e bears an accent?

When the voices of children are heard on the green,
And laughing is heard on the hill,
My heart is at rest within my breast,
And everything else is still.

‘Then come home, my children, the sun is gone down,
And the dews of night arise;
Come, come leave off play, and let us away
Till the morning appears in the skies.’

‘No, no, let us play, for it is yet day,
And we cannot go to sleep;
Besides, in the sky the little birds fly,
And the hills are all cover'd with sheep.’

‘Well, well, go and play till the light fades away,
And then go home to bed.’
The little ones leapèd, and shoutèd, and laugh'd
And all the hills echoèd.

poetry william-blake songs-of-innocence
Share
Improve this question
edited May 3 at 19:24

The 'èd' verb ending in 19th-century and earlier poems indicates that you are supposed to pronounce the ending -ed as a separate syllable.

This is not the spelling Blake used when he originally wrote this poem. He did not put the accent on leaped and shouted. 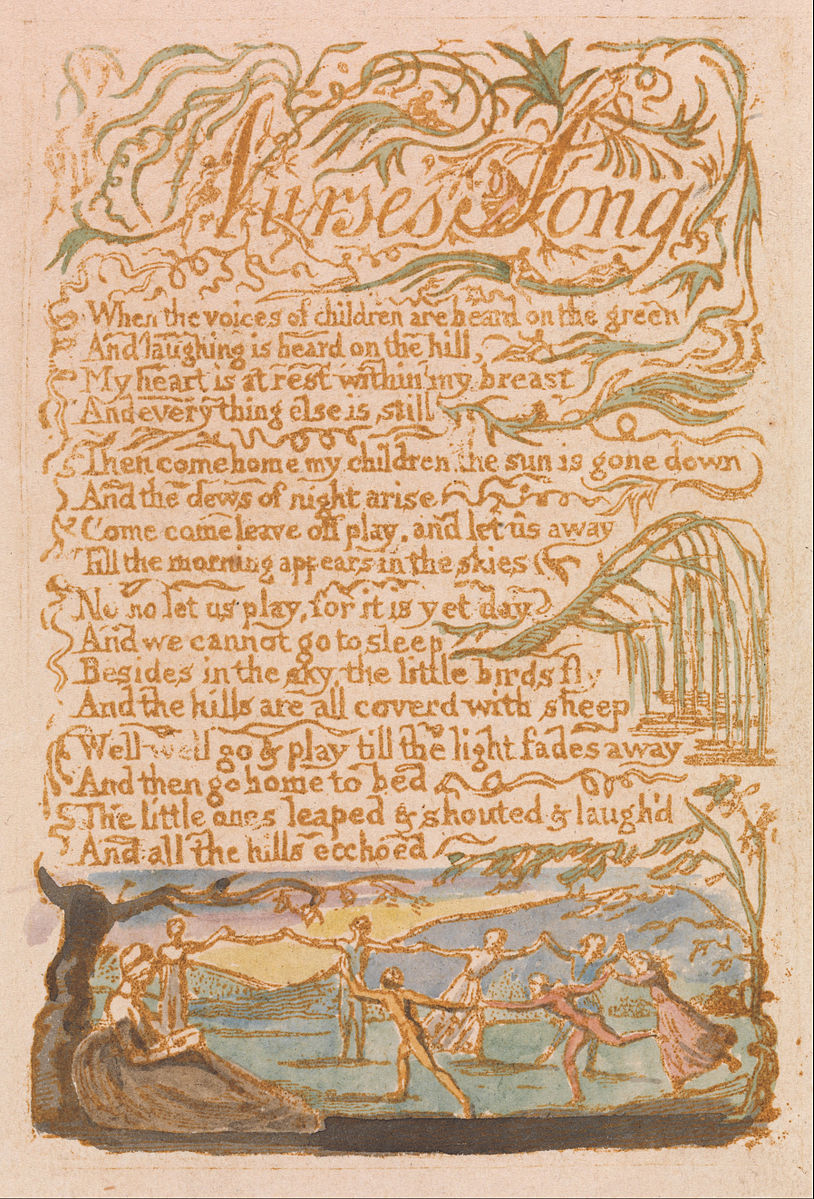 So why do editors add the accent today?

Today, in English, there are two ways of forming past tenses of regular verbs. If the verb ends with a /t/ or /d/, we add an extra syllable, as in printed. Otherwise, we either add the consonant /t/ or /d/, as in laughed, grinned or echoed.

When Blake wrote, the convention in poetry was to pronounce all past tenses spelled with 'ed' with an extra syllable, even though these endings weren't pronounced in normal speech. If the poet didn't want an extra syllable, they would replace the 'e' with an apostrophe, as in cover'd, leap'd, and laugh'd.

Today, since people don't understand this convention, editors insert an accented 'è' in past tenses when the poet wanted you to pronounce an extra syllable, like leapèd, shoutèd, and echoèd in Blake's poem.

How did this convention develop? In late Middle English, most verbs formed past tenses by adding an extra syllable. When Shakespeare wrote, in Early Modern English, the extra syllable was in the process of disappearing, and most regular verbs had two pronunciations in widespread use. Shakespeare and his contemporaries generally distinguished between these two pronunciations using spelling (although they didn't use accents and often didn't use apostrophes). Over the next two centuries, poets took advantage of the freedom to use these two different pronunciations so as to make their poems rhyme and scan, even though people had long stopped pronouncing the extra syllable in ordinary language (except for words like printed, where we still pronounce it today).

How should these be pronounced? If you look at the poems of Shakespeare and his contemporaries, they rhymed "-ed" past tense endings with words ending in /ɛd/, like bed and dead. Two hundred years later, Blake and Keats were still using those rhymes. Was this how this ending was pronounced in everyday English? If you look at Walker's Critical Pronouncing Dictionary from 1824, past tenses like blessed, learned, repeatedly, unrepented, are pronounced with /ɛd/, even though words ending with "-ed" that aren't past tenses, like naked, ragged, wicked, are pronounced with /ɪd/. So Blake and Keats pronounced the "-èd" ending the same way that (at least some) people pronounced past tenses of regular verbs ending with -ted or -ded.

Not the answer you're looking for? Browse other questions tagged poetry william-blake songs-of-innocence or ask your own question.

2
Theme of William Wordsworth's poem "We Are Seven"?
3
"By the lives of all who’d come to console and assist the stricken" What does it mean?
3
What does Silverweed's poem signify?
4
What is the significance of the 40-year period referred to in this Francisak Bahusevic poem?