This is going to sound like an extremely weird and specific identification request, but the book popped into my head a few days ago and it's become an itch in my brain to remember which book it was. I remember enough about it that it will hopefully be identifiable.

The book was definitely in the science fiction genre and was possibly young adult (YA) fiction, but I remember the book having some mature topics in it. I don't think that the plot I'm about to describe was the main plot; for some reason I remember it being only a sideplot to the main story, but I could be wrong. I think it may also have been part of a series or trilogy. I read it at some point in either middle school or high school during a phase when I was super into science fiction, and the main reason I remember it so vividly is because of this specific plotline, which was incredibly haunting and stuck with me. This was about 9-10 years ago. I live in the United States, and I don't remember what country the book was set in but it was probably also the U.S. The book was in English and all the characters spoke English.

In the story, a young female doctor is starting a new position at either a doctor's office, a hospital, or a pediatrician's office - cannot remember which. I believe she was a psychiatrist or psychologist specifically, but am not completely sure. The job involves a very domineering and controlling male character who doubts her credentials and intellect, and I remember them butting heads several times as the main character tries to prove she is a competent doctor who knows what she is doing. The doctor encounters several cases over the course of the plot where this occurs.

In the course of the story, the main character comes across a very young girl who has been accused of violently killing her brother and/or diagnosed with sociopathy and antisocial personality disorder. I don't remember the specific way she killed him, but I think it was very gruesome, maybe stabbing. The young girl is extremely sweet, friendly and charismatic with the main character, acting like a typical cute child with a harmless exterior, and appears to be trying to manipulate her. She is not allowed to interact with her family as a result of what happened because she's being kept in custody, but the parents still feel affection for her despite what happened and seem to want a resolution where she's able to live with them again. She claims to feel remorse for what she did and generally acts as you would expect a charismatic sociopath to act.

I can't remember if the doctor is charmed by her into letting her go back to her family or if the doctor is ordered into it by her superior, but regardless, plot events transpire where the child is eventually allowed to go back to live with her family for a short period of time as a test run to re-integrate her, whereupon she murders a family member or possibly the whole family - cannot remember which. I remember this bit being a shocking event in the story and it being a very powerful and frightening reveal. The main character is extremely distraught about the events and can't forgive herself for the part she played in it.

Other details I vaguely remember

I will be forever grateful if someone recognizes this book and can scratch the itch in my brain. If I find it again I'd like to read it again with more mature eyes, since a lot of the more adult topics in the book probably went over my head at the time I read it.

I figured it out!

After letting this stew in my brain and having vague recollections that it had something to do with robots or was inspired by Asimov in some way, a lot of Googling phrases like "asimov robot spinoff" led me to stumble right into the answer. The second I saw the book's cover I recognized it as the correct book.

The book is I, Robot: To Protect, written by Mickey Zucker Reichert in 2011, and was the first in a science fiction trilogy based on Isaac Asimov's novels and the character of Susan Calvin. (Goodreads) It was written to be a spiritual prequel to the Asimov books that explored Susan Calvin's character and her past. Not everyone agreed it was a good prequel and some of the reviews are divisive on things like the philosophy the book presented and whether Susan was written well; I do remember liking it when I read it, but I was young and a lot of the heavier philosophy in it probably flew over my head. 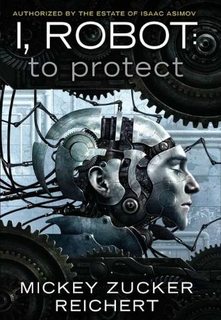 The main protagonist, a pediatric inpatient psychiatrist, was Susan Calvin, the daughter of roboticist Dr. John Calvin. She is doing a residency at Manhattan Hasbro Hospital, and the book revolves around the pediatric cases and patients she deals with there against the backdrop of examining eugenics and artificial rights. The domineering male character was Remington Hawthorn, her stuck-up Harvard-educated superior who she apparently later romances.

The young girl that I remembered was Sharicka Anson, a 4-year-old diagnosed with juvenile conduct disorder. She is one of the first four patients that Susan is assigned on her rotation, and is chronologically the fourth case that Susan manages after dealing with the first three. She is portrayed as having high intelligence and being a sadistic manipulator, and when presented to Susan she has killed her family pet and attempted to kill her sister and other children - I remembered that detail wrong, thinking she had already killed her brother. She is by far the most memorable of the four patients, which is probably why she stuck in my brain so strongly. The parents are interviewed by Susan a few times throughout the story on aspects of Sharicka's character. Just as I remembered, Susan does get drawn into her manipulations, and talks the reluctant family into letting Sharicka come home. The ending where she returns to her parents only to cause brutal mayhem plays out essentially exactly how I remembered it. She kills one of her siblings and almost kills another. Susan is extremely distraught over it and regrets ever letting her go home and falling prey to her charms.

I'm glad I figured this one out. Almost everything I remembered about it was generally accurate except for that initially, she had almost killed her sister instead of actually killing her brother. Hopefully I didn't drive anyone too crazy trying to look for it in the meantime!

15
Identify a book, love triangle, death of a woman, no Personal Computers
10
Book about a boy who develops several accidentally destructive science projects
12
Trying to remember a book about a relationship between a teenage girl and an older man
1
Story involving Islamic terrorists planning an attack on a stadium
3
Female detective, former police. Dark and troubled past involving violently killing a house of criminals who were holding her hostage and abusing her
10
Young adult fantasy book about a girl with gray eyes and powers related to metal
3
Children's book including Motor-mouth Marcy, Asian immigrant who made MC's Christmas present, and hypnosis for basketball