From the prologue of Hard to Be a God:

"You know, Anetchka--" said Pashka.
"Don't you call me Anetchka," Anka cut in abruptly. She could not stand to be called by any other name than Anka.

What does it say about Anka's character that she refuses to answer to Anetchka?

(Note to non-Slavic speakers: as I understand it, this is not the same as, say, an Englishman called James who refuses to answer to Jim. Russian diminutive forms are much more prevalent, even being widely used for common nouns as well as personal names, and different diminutives of the same name have specific meanings. I suspect that a fluent Russian speaker could look at this quote and immediately deduce something about Anka's personality - my question is what.)

All three of them are trying to seem more grown up than they really are.

Running from their boarding school? With crossbows blazing? That doesn't sound like trying to be more grown up than they really are at all. We don't know how old they are at this time, but I'll make an educated guess and say 12-16 years old, the right time when running away towards independence is most craved.

And Pashka was filled with the vague elation he always felt when he and Anton had run away from boarding school and a day of total independence lay ahead—full of undiscovered places, wild strawberries, hot deserted meadows, gray lizards, and ice-cold water from unexpected springs. And as always, he wanted to whoop and leap up high in the air, and he immediately did so, and Anton looked at him, laughing, and Pashka saw that Anton’s eyes expressed complete understanding.
Hard to be a God, Gollancz edition, prologue, page 5.

Do note that they carry loaded and lethal weapons:

Anka gave Pashka back his rifle. “Do you always let loose at each other like that?” she asked enviously. “Of course!” Pashka said in surprise. “What, are we supposed to yell ‘Boom-boom’? ‘Bang-bang’? The game needs an element of risk!”

He was suddenly seized with the certainty that even if he turned his back to them, the heavy bolt would still sink right into the bridge of Pashka’s nose, between his cheerful green eyes.
Ibid, pages 10 and 11.

She is (mentally) the most grown-up of them all.

Then there is also, I think, an old trope in Soviet (and maybe in other1) literature, that in a group of two boys and a girl, the girl is usually the most level-headed person.

Take Anton: he clearly admires her:

She had excellent muscles — Anton enjoyed watching the little hard ball of her biceps roll under her tanned skin.

It was wonderful walking alone in the forest with her like this, shoulder to shoulder, bare elbows touching, glancing over occasionally to take in how pretty she was, how agile, and how amazingly friendly. How her eyes were big and gray, with black eyelashes.
Ibid, pages 3 and 6, respectively.

Or Pavel: he clearly is the most cheerful and happy-go-lucky person of the three. Before the game of Wilhelm Tell, Anton is unsure, Anka is skeptic, and only Paska enjoys himself almost until the end.

Anton took the red bundle and examined it carefully. He looked at Anka—her eyes were like slits. And Pashka was enjoying himself—he was having fun.

Pashka was smirking. He was still playing around. Anton bent down and started slowly drawing the bowstrings. “Bless you, my father William!” Pashka called out. “And thank you for everything, no matter what happens.”
Ibid, page 11.

Among those adolescent boys, someone has to be the grownup. This hapens to be Anka. And from her overall tone and posture throughout the prologue, one can see that she acts unimpressed by boys' feats.

I believe Anka being the grownup, and Pashka being the least grownup, is what makes her dismiss Pavel's address as angrily as she did.

Pavel was most likely trying to patronise her by using a diminutive "Anechka", given this is the first time she ever ran away from the boarding school with them. He felt he needed to introduce the newbie to the adventure, but Anka had a different opinion on the subject.

Disclaimer: this part reflects my own observations and experiences, and I don't expect everyone to agree.

Well, not necessarily childish - lovers may use it in their conversations, but I don't think it is very common. Of all my friends called Anna, all preferred to be called Anya (Аня). An'ka (Анька) is also possible, but it is even less informal and has to be used for someone who is a very close friend.

Anka, on the other hand, does not sound patronising, but rather as a nickname that is intended to be used by peers (this isn't something I could possibly rationalise either - the ending -nka is often used to derive new "friendly" names for things, and I always thought upon reading that Anka preferred to be called that because it sounds teenager-ish).

There may have been a behind-the-scenes reason for the name "Anka".
The rest is pure speculation and is only tangential to the question.

This is pure speculation, and a very far stretch, and frankly, more of a historical anecdote, but it appears that an Anka was a major character in the 1934 Soviet film Chapaev, about the eponymous Red Army comander.

In his introduction to Hard to be a God, Ken MacLeod notes that Hard to be a God was intended to be written differently, as "an exciting adventure story in the manener of The Three Musketeers". Authors changed the tone of the novel after Nikita Khrushev's visit to the avant-garde exhibiton, where he heavily criticised the artists, using, among others, swear words. Boris Strugatsky reflected on this in his afterword for Hard to be a God:

We shouldn’t have illusions. We shouldn’t have hopes for a brighter future. We were being governed by goons and enemies of culture. They will never be with us. They will always be against us. They will never let us say what we believe is right, because what they believe is right is something completely different. And if for us communism is a world of freedom and creativity, for them communism is a society where the people immediately and with pleasure perform all the prescriptions of the party and government.

The realization of these simple — although then far from obvious for us — truths was painful, like the realization of any truth, but beneficial at the same time. New ideas appeared and strongly demanded their immediate implementation. The “fun story in the spirit of The Three Musketeers” that we had thought up began to appear in an entirely different light, and I didn’t need long speeches to convince Arkady that they needed to make a substantial ideological adjustment in The Observer. The time of “light things,” the time of “swords and cardinals” seemed to have passed. Or maybe it simply hadn’t come yet. The adventure story had to, was obliged to, become a story about the fate of the intelligentsia, submerged in the twilight of the Middle Ages.
Ibid, afterword, page 244.

I think, just maybe, the name Anka had been added to form a positive connection between the hero of the novel and the symbol of patriotism that Anka of the 1934 film was, to soothe the reaction of censors. According to her Wikipedia entry, Anka was added per the request of Stalin, who named Chapaev his favourite film (ironically enough, so did Vladimir).

But then, this is just my speculation. 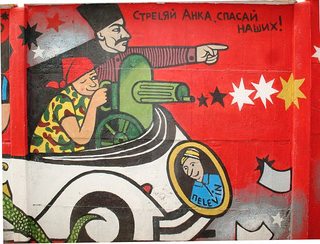 Anka on a grafitti in Kharkiv, Ukraine. Art by V. Vizu, from Wikimedia Commons, CC BY-SA 3.0. The grafitti reads "Fire, Anka, save our allies!"

1: As much as I hate to mention those books here, Harry Potter's Hermione Granger would be Anka to Ron and Harry.

Not the answer you're looking for? Browse other questions tagged russian-literature strugatsky-brothers hard-to-be-a-god or ask your own question.

11
Why did the doctor give Count Bezukhov cream of tartar?
7
Given Anton's attitudes expressed to Budakh, why did Earth start Progressors?
4
Could Levin have a friend like Oblonsky in real life?
5
Who came to Rumata's house at the end, and why?
4
Why did Smerdyakov kill himself in the Brothers Karamazov?
9
Why do peasants in 19th century Russian literature often have Greek names?
5
The Brothers Karamazov - Why does Dmitri use “Bernard” as an insult?
1
Why is War and Peace not considered an epic?