Is the grail in Chrétien de Troyes "Perceval" called "holy"?

According to Wikipedia article devoted to the tale Perceval, the Story of the Grail by Chrétien de Troyes,

Perceval is the earliest recorded account of what was to become the Quest for the Holy Grail but describes only a golden grail (a serving dish) in the central scene, does not call it "holy" and treats a lance, appearing at the same time, as equally significant.

However, I've been reading this romance in an Italian translation by Gabriella Agrati and Maria Letizia Magini and, at a certain point, when the hermit explains to Parceval that is the Fisher King’s father who uses the grail, he calls it with the Italian word "santo", which means "holy":

This is an extract from the book Chrétien de Troyes, I romanzi cortesi, edited by Mondadori (page 611 in the Kindle ebook with ISBN 9788852038693), that can more or less be translated this way:

And know that the Fisher King is the son of that king who feeds on the Holy Grail. But don't think that pike, lamprey or salmon is served to him. Only host is brought to him in the Holy Grail.

I've tried to access the Old French original, but this part of the text has not yet been included in the Wikisource project.

So, I wonder if the original text by Chrétien de Troyes calls the grail "holy" (that is, "saint" or an equivalent word in Old French) or not. That's my question.

In the French text on Wikisource, I found the corresponding passage (emphasis mine):

The edition by Ch. Potvin (Mons, 1866 renders the same passage as follows (emphasis mine):

The last line can be translated as "that so holy thing that is the grail". Even though the phrase "saint graal" does not occur in the French text on Wikisource, the above passage clearly describes it as "holy". 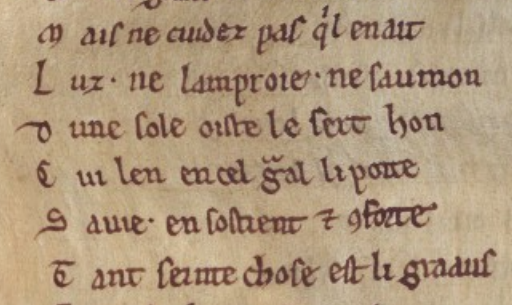 Not the answer you're looking for? Browse other questions tagged french-literature arthurian-legend chretien-de-troyes perceval or ask your own question.

17
Why is the tense wrong in the beginning of The Stranger?
8
What is the "Eastern wolf" in this poem?
3
What is meant by "pensée indétérminée" in the Geneva School?
5
If the Mabinogion consists of 11 or 12 stories, why are only 4 of them called the Branches of the Mabinogi?
7
Why was Hugues de Groot also called "Grotius"?