What does Dream's ruby represent?

In Volume One of The Sandman (Preludes and Nocturnes), Dream is held captive for 70 years. After escaping and taking vengeance on his (only surviving) captor, he returns home, to the Dreamworld. Finding it in disarray, he realizes that he needs to recover his "tools," his totems of power, so that he can make things right again. He mentions that he has "placed too much of [himself] in the tools," implying that his tools (ruby, pouch of sand, and and helm) contain parts of his power and, perhaps, his being. 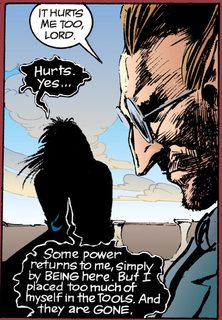 He decides to quest for his lost tools, spending most of the volume in that pursuit.

After recovering his pouch and helm, Dream attempts to recover his ruby from a Justice League storage house (#5 "Passengers"). However, he is knocked out when he touches it, because John Dee modified it during his years of using it. While Dream is out, Dee takes the ruby, and wreaks global havoc with it for one day (#6 "24 Hours").

When that day is over, Dream asks Dee to return the ruby to him so he can attempt to fix all the things that Dee has broken. Dee, however, refuses, and threatens to kill Dream with the ruby. 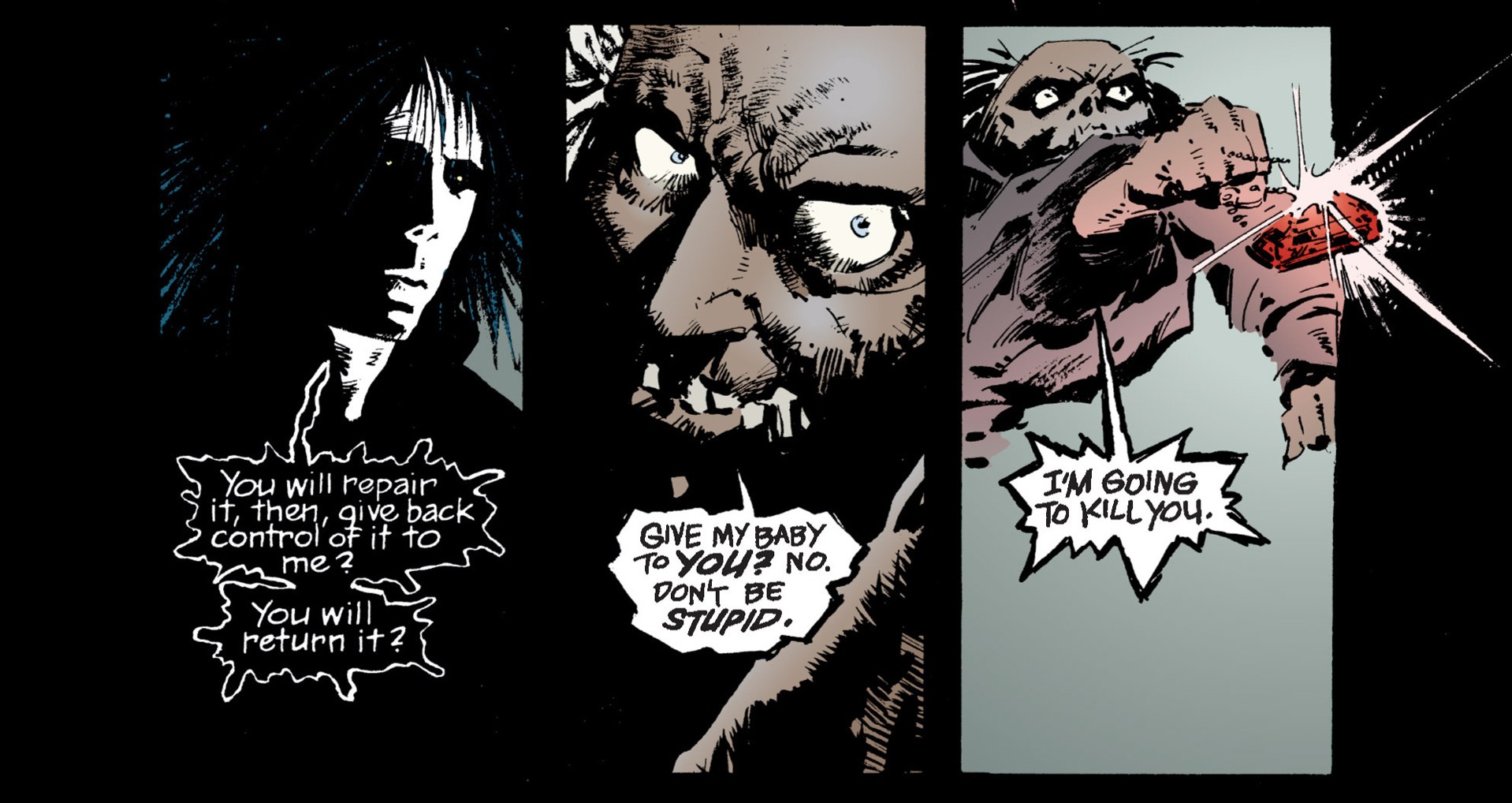 During that conversation, Dream says a little more about his relationship with the gem: 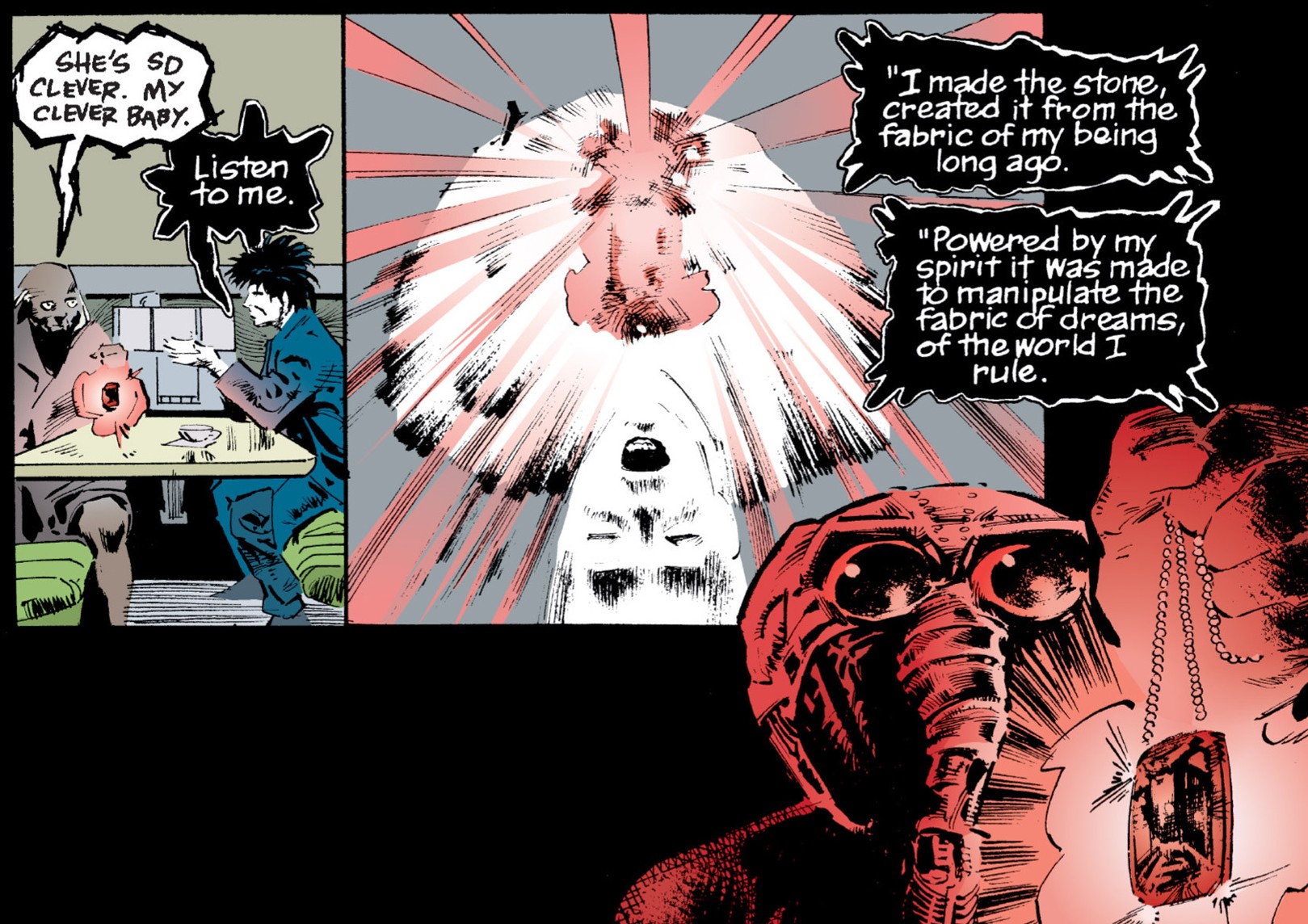 Dream takes the battle to the Dreaming, where Dee appears to destroy Dream with the ruby; actually, he destroyed the ruby and transferred the power inside it back to Dream. 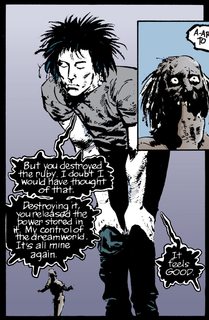 What does the ruby represent? There's a lot going on around this ruby: it is an object that was created by an anthropomorphic personification of dreams, invested with his power and part of his being, that was stolen from him, rendered unusable to him, used to wreak global chaos, destroyed in an attempt to kill its creator, and ultimately returned its power to Dream.

I am not very well-versed in mythology, but I am fascinated by the ruby and Dream's relationship with it. I would appreciate answers that involve mythology (as Dream has connections to mythology), but answers with other sources are also acceptable. Like I said, there's a lot going on with this gem, but answers don't need to explain all of it (good answers, like scientific theories, will explain as many facts as possible; the more things explained the better).

You have seen that the viewers' perception of Endless is based on individual expectations. 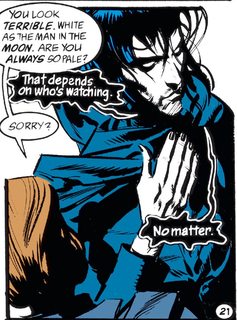 For instance, Dream appears as a black short-haired man to Nada, while he usually looks like a pale white messy haired man (not like Neil Gaiman at all) 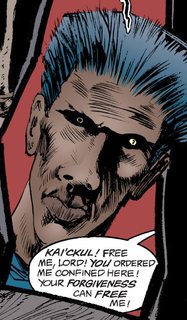 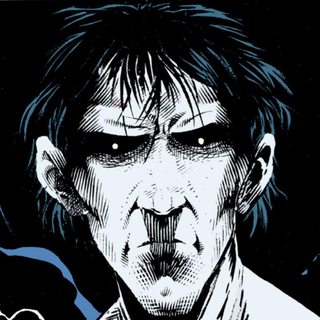 But that's not all. The Endless are different from all the other entities in the sense they are truly endless. Endless cannot be killed, as they are anthropomorphic personifications of natural forces. 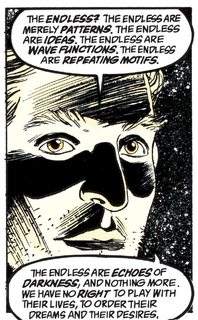 When an Endless is "killed", another aspect of them takes place instead. 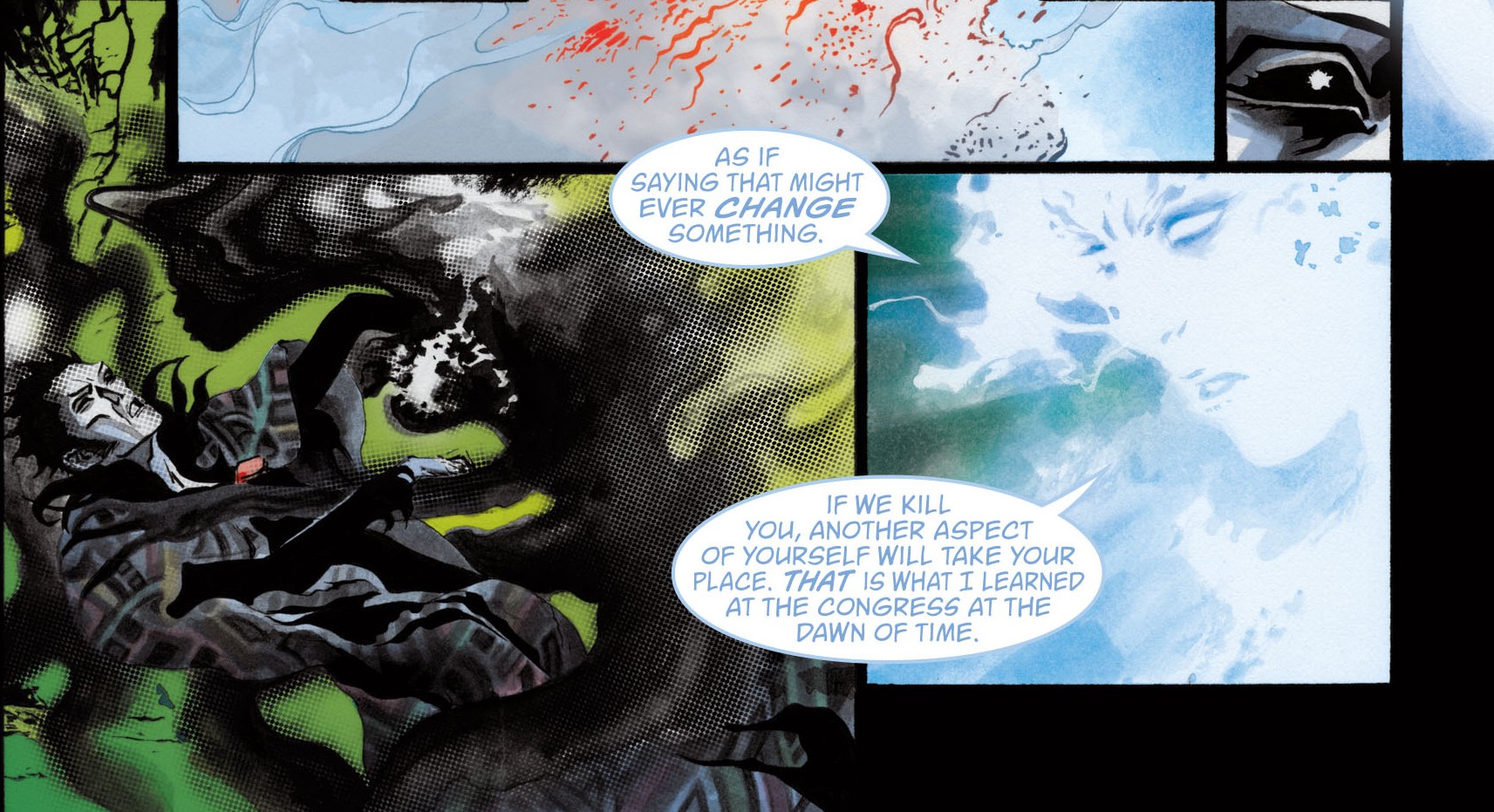 But let's talk about the tools for a little: the Ruby, the Helm, the Pouch. Dream says he created them at the beginning of time to help him govern his realm:

The Ruby, as it turns out in The Kindly Ones, is not one of a kind. Dream had created a number of Dreamstones, of which the most powerful was the Ruby. 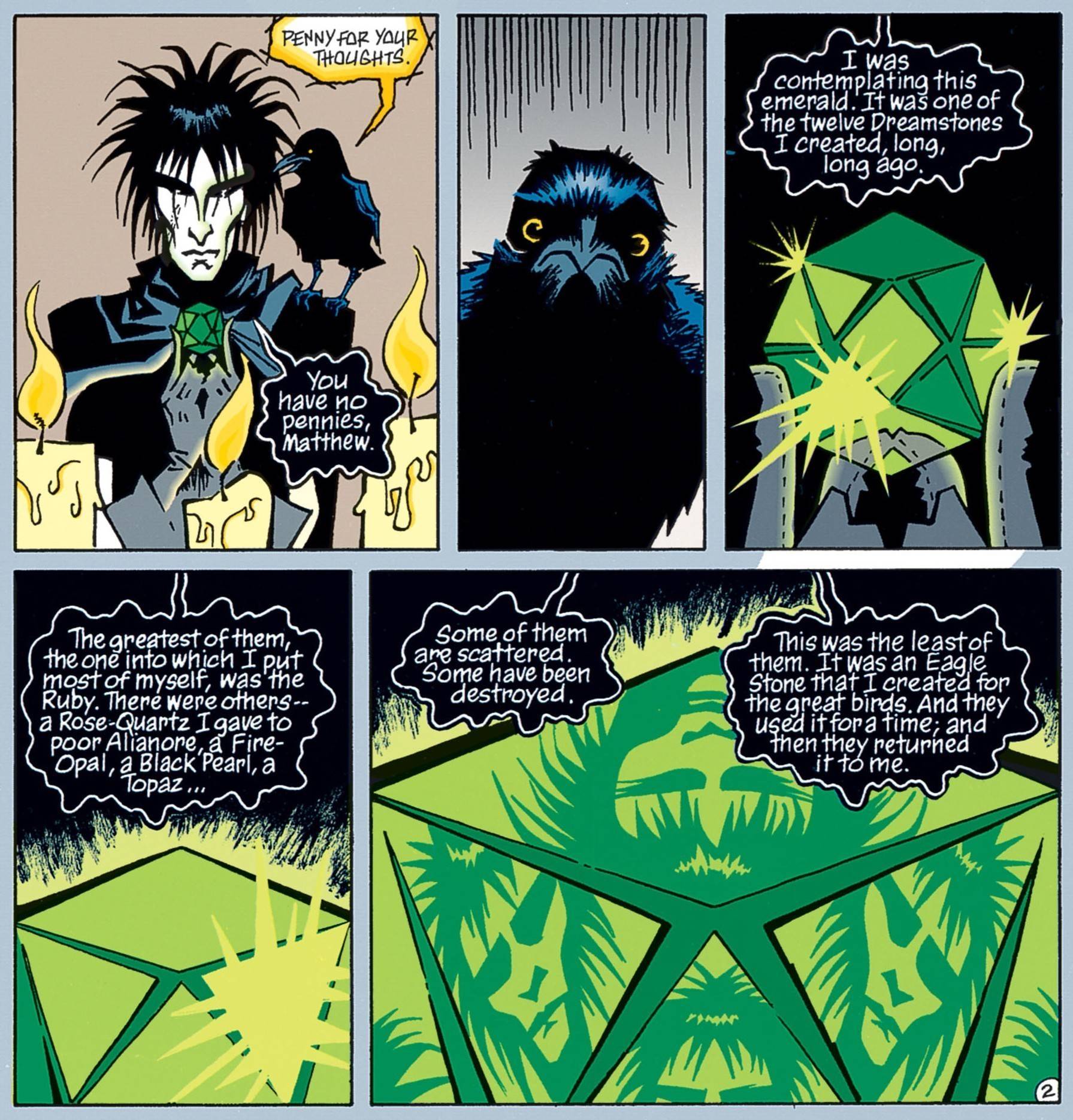 Morpheus draws our attention to the facets of the gem; the facet is the visible side, and each facet may be different, but it doesn't describe the whole gem. The gem has many facets, of which only one can be seen at a time.

And in The Sandman #21 (page 11), introducing Dream along with most of his family:

Dream of the Endless: ah, there's a conundrum.

In this aspect (and we perceive but aspects of the Endless, as we see the light glinting from one tiny facet of some huge and flawlessly cut precious stone), he is rake-thin, with skin the color of falling snow.
Emphasis added

The Ruby represents the multi-faceted nature of Dream as one of the Endless. The Endless are anthropomorphic personifications of natural forces, but those forces will continue to exist even if a personification is destroyed:

But a personification is needed (apparently), so a new aspect of an Endless will be born.

The newborn aspect will still be the same Endless - except, possibly, in personality. Thus they are called "aspects" - just as the facets of the gem.

The Ruby also represents Morpheus' self-restraint, and consecutively the importance with which he treats his job. 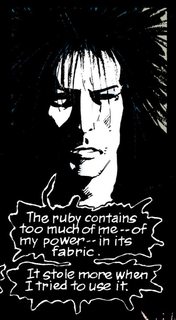 I think for Morpheus' case, we can quite accurately say that he has put his soul into his job2.

Neil Gaiman has another opinion. In Hy Bender's The Sandman Companion Gaiman says the following:

[Ruby] was normally a kind of computer, that automated things for the Sandman; instead of having to figure out how to perform a certain task, Dream would just say "Ruby, do this," and it was done.
The Sandman Companion, "Secret Origins", page 236.

There is also this bit, where Gaiman calls the Ruby a trap:

NG: It wrapped up the Sandman's quest for his tools of office, and it restored him to full power by having Doctor Dee destroy his ruby - demonstrating that tools can be the subtlest of traps.
Ibid, "Preludes and Nocturnes", page 37.

In combination with the previous quote, I think this means that Morpheus was less bounded by his own rules after the destruction of the Ruby, and started giving matters more attention. Perhaps it is also amplified by the time he had to reflect on his doings, while in captivity.

This is echoed in the last volume, The Wake, in the story named "Exiles" (drawn exquisitely by Jon J. Muth): 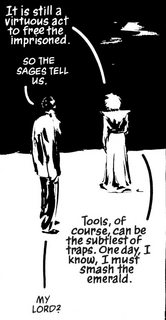 We can take from this that Dream has learned his lesson from his unfortunate mishap with the Ruby and Dr. Dee, and won't rely on tools as much anymore.

1: One possible exception is Death, but it is not clear whether she will exist after the Universe is gone. It is almost certain, however, that she will be the last of the Endless.

2: Whatever the correct English expression is.

12
What is the reason for partial highlighting in "The Sandman"?
9
Did young Dream and Death really look like this?

8
Was Neil Gaiman influenced by Heinrich Heine?
14
What's the significance of the witches' name change in Sandman?
9
Why does Night say Desire and Morpheus are alike?
6
Does part four of Doll's House add to the narrative of the volume?
10
Is the story of "Tales in the Sand" (or its form) faithful to traditional African stories?
9
In "The Sandman", what are nightmares for?
9
Did young Dream and Death really look like this?
4
Is the heart in "The Hunt" associated with Desire?
7
Why does Ishtar insist on being called "Ishtar"?