In Neil Gaiman's "The Sandman", what do the Three Sisters represent?

The Three Sisters - the Hecatae, the Fates, the Kindly Ones - are ubiquitous in Neil Gaiman's The Sandman (and in other works). They appear in the first volume to give Morpheus three answers:

and then appear in almost every volume, in one aspect or another, until finally they appear as the Kindly Ones and

bring ruin to the Dreaming and force Morpheus to give up his existence.

Morpheus describes them as obeying the oldest rules, in the same way he does. The Three-in-One appear to be a fundamental force in the Universe.

And then there's this panel after the events described above - to me, it appeared as Neil Gaiman's monologue, reflecting on the plot of The Sandman. 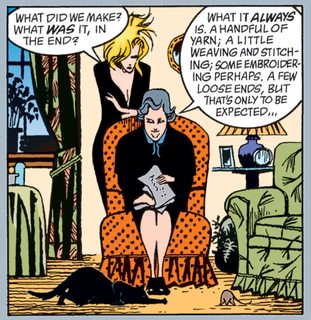 It is never explained what exactly they are, which brings me to the question - what do the three sisters symbolise? The inevitability of fate? Some sort of higher power? Determinism? Taking the responsibility for own actions?

The three women is a recurring motif in stories and mythology. The fates, the graces, the furies in Greek mythology, the norns in Norse mythology, Shakespeare's weird sisters, etc.

In The Sandman, Gaiman recurrently hints that the three-in-one are both the fates and the furies. Perhaps the three - the mother, the maiden, the crone, also stands for some sort of female principle (contrasting with the father, the son, and the holy ghost?), one that is not so much interested in winning the game as making sure it creates an interesting whole.

The fates (and their counterparts in other mythologies) are often seen working with threads and weaves, as a metaphor for life and fate. Perhaps it also stands for literature and storytelling itself, and the three-in-one seem to always be slightly removed from the story, shaping it, rather than being part of it. Their question seems to echo that of the baby taken by Death in an early episode - “was that all?”, to which Death responds, “you get what anybody gets, you get a lifetime”. Even though the fates - as we all are - seem to be in control of what happens to a life, they still have this question: What was it, in the end?

13
What's the significance of the witches' name change in Sandman?