Why might Robert Frost specify a ' long two-pointed ladder' in the poem 'After Apple Picking'?

The opening lines of Robert Frost's 'After Apple Picking' read:

My long two-pointed ladder's sticking through a tree
Toward heaven still,
And there's a barrel that I didn't fill
Beside it, and there may be two or three
Apples I didn't pick upon some bough.
But I am done with apple-picking now.

The poem establishes the relationship of the concrete situation of apple-picking to the abstract one of spiritual purpose in the first two lines. I can understand the purpose of a ladder on both levels: in the first place, some kind of ladder is necessary to pick apples, at least before the invention of the so-called cherry-picker; in the second place, a ladder brings a man closer to heaven, and can perhaps represent man's own efforts to approach the divine.

Why a 'long two-pointed' ladder, though? Are there ladders with more or fewer points?

Metrically, I can see how opening the poem with such heavily stressed words helps to connect us to the speakers toil. Here is how I scan the first line: 'my long two point ed lad der's stick ing through a tree'

Why a 'long two-pointed' ladder, though? Are there ladders with more or fewer points?

I've spent some time pondering this aspect of your question. Ladders are not generally pointed at all, but Orchard ladders are. 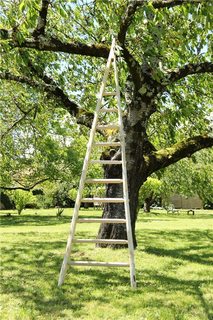 However, I don't think the pointy top is particularly relevant to the two-pointed description and can be discounted. Orchard ladders also come in much more gently tapered forms. 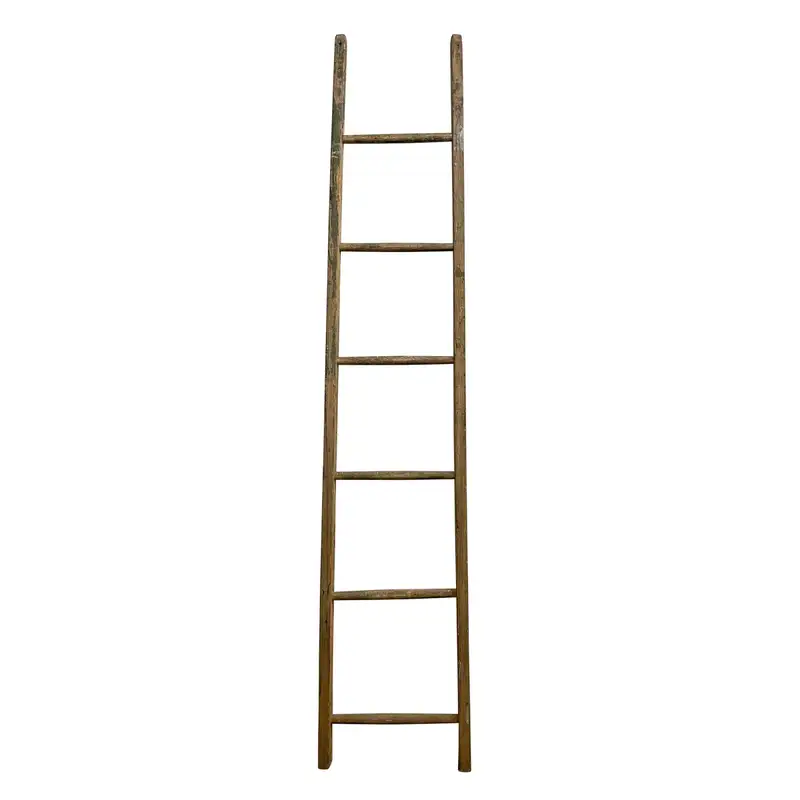 More pertinently to the question, orchard ladders also come in a 'tripod' variety, which may fairly be described as a 'three point' ladder, the weight being distributed across three points in contact with the ground. 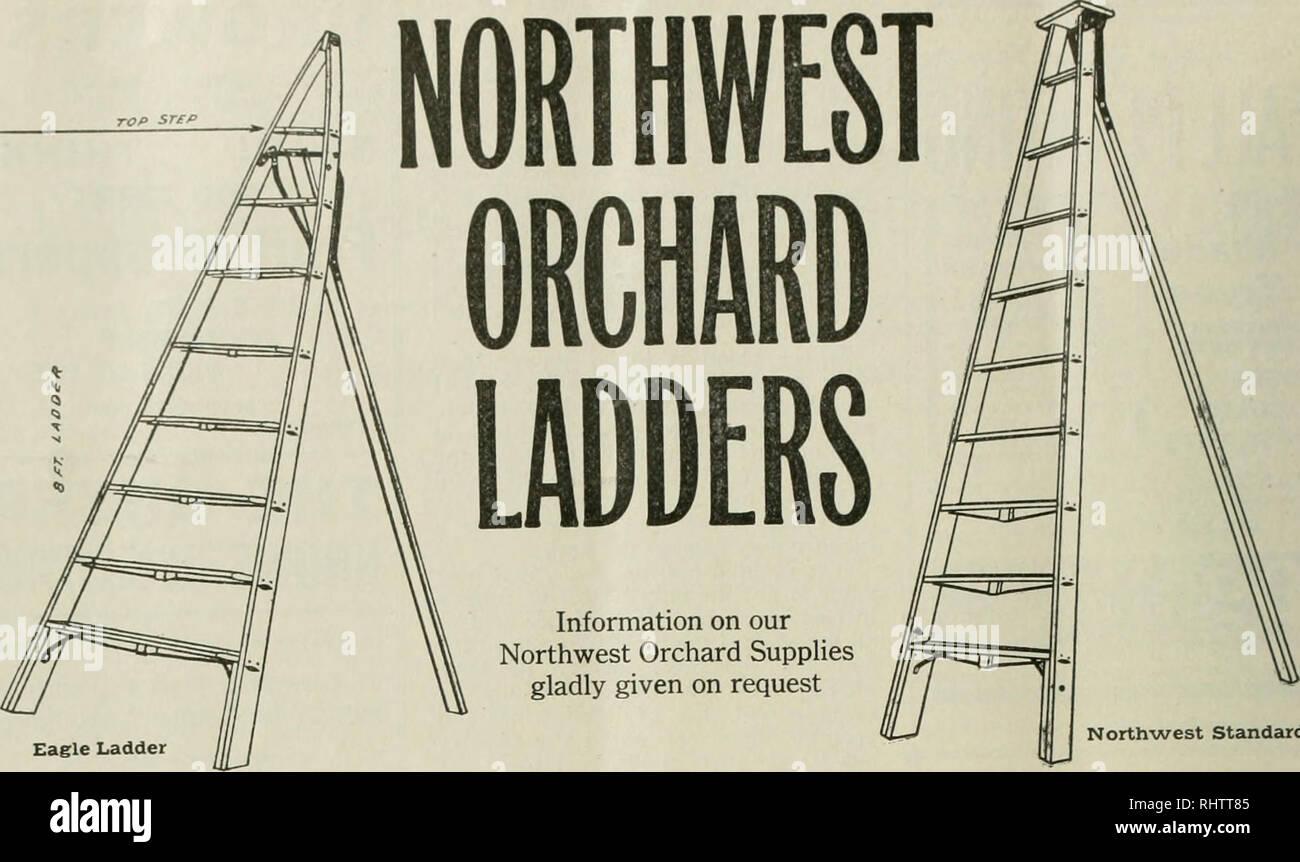 The later line in the poem

I feel the ladder sway as the boughs bend.

tells us that he has not been using a ladder which is placed firmly on the ground, but one which only has its base, i.e. two points, on the ground and leans against the apple tree itself.

It is possible that there is a particular spiritual connotation to this via the Hymn Jesus Christ the Apple Tree. Although written in England:

The hymn's first known appearance in a hymnal, and in America, was in 1784 in Divine Hymns, or Spiritual Songs: for the use of Religious Assemblies and Private Christians compiled by Joshua Smith, a lay Baptist minister from New Hampshire. It became prevalent in American publications but not English ones.

I'm weary with my former toil -
Here I will sit and rest awhile,
Under the shadow I will be,
Of Jesus Christ the Appletree.

Sung here by the Choir of King's College

As a student some sixty years ago I picked apples as part of a summer job. That is my only qualification for the following observations.

Orchards today are populated with short trees to make harvesting easier, either mechanically or manually. The trees that I picked were big, and so would have been the trees that Frost is speaking of. A long ladder that is not tapered is very awkward to shift and does not stand stably. The taper can apply both to the distance between the uprights and to their thickness, also to the thickness of the rungs because a shorter rung needs less thickness. On the other hand, one that tapers straight to a point is not useful in its upper part and one that curves to a point is hard to make. I feel sure that a long ladder (30 feet or more) tapering to about half of its initial width is what Frost had in mind. At that time, it would have been a familiar sight to most of his readers, so that "long" and "two-pointed" would have brought an image to their minds. So as to work for even the tallest tree in the orchard, this ladder would have stuck through many of the others. It therefore attains a height that most of its climbers do not reach.

I think looking at the poem's meaning may be helpful here. If we assume that "After Apple Picking" is a poem about the end of life (the apple picking has been done, the ladder specifically points towards heaven) and looking towards death, it makes sense to see the ladder's side rails as the beginnings of lines that converge at an imaginary point beyond the end of those side rails, namely in heaven. This image is also supported by the fact that the ladder is sticking through a tree, as Peter Short pointed out in a comment, rather than ending in it.

For this reason, the "two-pointed ladder" deviates from the designs in Spagirl's original answer. The ladder whose side rails converge at the end would not actually continue to heaven, whereas the type with a horizontal plank at the top had side rails that are interrupted.

For this reason, I think looking for the most common types of orchard ladders is misleading in this case, especially without taking the overall meaning into account.

'two-pointed' evokes a forked tongue. This creates a synthetic snake/ladder image, which should call to mind Genesis 3 - if the title did not do that already.

2
Do the opening lines of Frost’s poem “After Apple-Picking” contain a biblical reference?

17
Why does Robert Frost contradict himself in "The Road Not Taken"
2
Do the opening lines of Frost’s poem “After Apple-Picking” contain a biblical reference?
1
Why is "The choir of bell-flowers" referred to as "a fragment of a long poem" in the subtitle?