Does "sleeves without a sign of cuff or shirt" imply social class?

Quote from "The Adventure of the Blue Carbuncle":

His rusty black frock-coat was buttoned right up in front, with the collar turned up, and his lank wrists protruded from his sleeves without a sign of cuff or shirt.

This is an description of Henry Baker, the one who used to be rich but had been down in the world because he drank too much. According to the author, he came to Holmes in a rusty black frock-coat after Christmas.

Henry Baker "has rounded shoulders"，then does "lank wrists" imply that he became less strong since he drank a lot and never took on any training?

As to "his lank wrists protruded from his sleeves without a sign of cuff or shirt", does it imply an incorrect sleeve length of shirt?

The implication is that Baker is in such straitened circumstances that he has sold or pawned his shirt, and is trying to disguise the fact by keeping his coat buttoned and his collar turned up, even when indoors. The original publication of the story in the Strand Magazine, 1892, had an illustration by Sidney Paget, contrasting Holmes, whose unbuttoned frock coat reveals a waistcoat, shirt and tie; with Baker, whose coat is uncomfortably buttoned up to the neck. 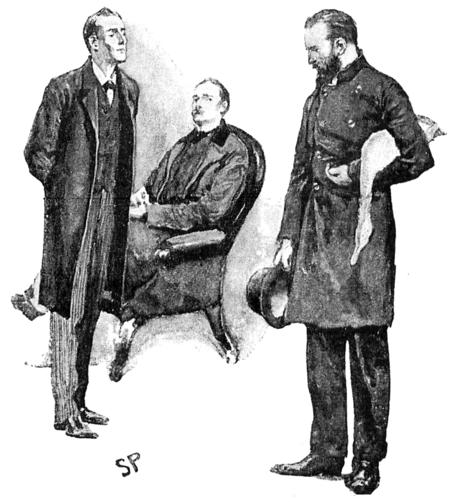 Pawning one’s shirt to pay for drink was a byword for ruinous alcoholism, for example in this mock-antiquarian ballad:

He pawned his shirt and his breeches both
Where the fire shines bright on yon Ale-house-wall;
He then did swear a terrible oath,
For ire that liquor was lord of all.

or in this newspaper report of an inquest on a suicide:

An inquest was held at the Black Horse, Vine-street, Chandos-street, Covent-garden, on the body of William Gable, aged 32 years, who was found suspended in a common brothel, No. 4, Vine-street. From the evidence, it appeared that the deceased was a watch-finisher, residing in Old-street-road; latterly his conduct was altered, and his spirits had been much depressed, in consequence of his ill-success in business, which rendered him incapable of supporting his family in the manner he wished; he, therefore, resolved to leave his home and family of eight children; and, on Wednesday night, sent his wife on an errand, when he dressed himself in a somewhat respectable manner, and taking a watch, which belonged to one of his customers, went away. His first step, it appeared, was to pledge the watch in the neighbourhood of Smithfield, for 2l.;† he then went through the neighbourhood of Chandos-street where he was accosted by several women of the town. He accompanied one of them to the house in which he was found dead. Gin and beer were supplied till Friday evening, when, after having pawned his shirt and his hat, he found himself without a penny.

Not the answer you're looking for? Browse other questions tagged meaning short-stories arthur-conan-doyle sherlock-holmes cultural-context or ask your own question.

11
Why does "The Five Orange Pips" devote an entire paragraph at the beginning to the case with the watch?
0
Is it true that short stories "must" end without definite conclusions?
2
In "The Rattrap" why does the peddler sign as captain and how does it help to get free of the rattrap?
4
What does this passage mean about third-class passengers in the Madras-Bangalore Express?
6
What does "loose-jointed" mean in this Sherlock Holmes passage?
4
Which does this part refer to, a pencil or the words?
6
What does "more than I gave" mean in "I therefore named a price which was £500 more than I gave"?
5
Where did Doyle write that the Hound of the Baskervilles was originally intended as a "Victorian creeper", and what does this mean?