In my experience, Neil Gaiman's understanding of mythology and literature is exceptionally profound, and he is able to render stories with mythological resonance surpassing the work of most of his contemporaries, particularly in the groundbreaking Sandman series.

His choice of Morpheus comes from Ovid, but I'm wondering if Heine's famous poem "Morphine" was an influence also.

It might just be coincidence in the rendering of two great artists, but where I didn't discover Heine until later in life, Gaiman strikes me as someone who probably read him in high school.

A notable element of the Sandman character is his perpetual, existential angst.

There’s a mirror likeness between the two
Bright, youthfully-shaped figures, though
One’s paler than the other and more austere,
I might even say more perfect, more distinguished,
Than the one who’d take me confidingly in his arms –
How soft then, loving, his smile, how blessed his glance!
Then it might well have been, that his wreath
Of white poppies touched my forehead, at times,
Drove the pain from my mind with its strange scent.
But all that’s transient. I can only, now, be well,
When the other one, so serious and pale,
The older brother, lowers his dark torch. –
Sleep is good: and Death is better, yet
Surely never to have been born is best.
[Source: Allpoetry.com]

There is no indication in various sources found online that Gaiman was influenced by Heinrich Heine.

In short, these are the authors Gaiman said he was influenced by:

Did I say short? Must have slipped.

But in short, Gaiman doesn't mention Heine as his influence.

I think the problem is in the premise of your question: Morpheus is not in the state of "perpetual, existential angst".

In the first volume Preludes and Nocturnes there are some hints that Morpheus is having some sort of existential crisis, but in the end it gets resolved: 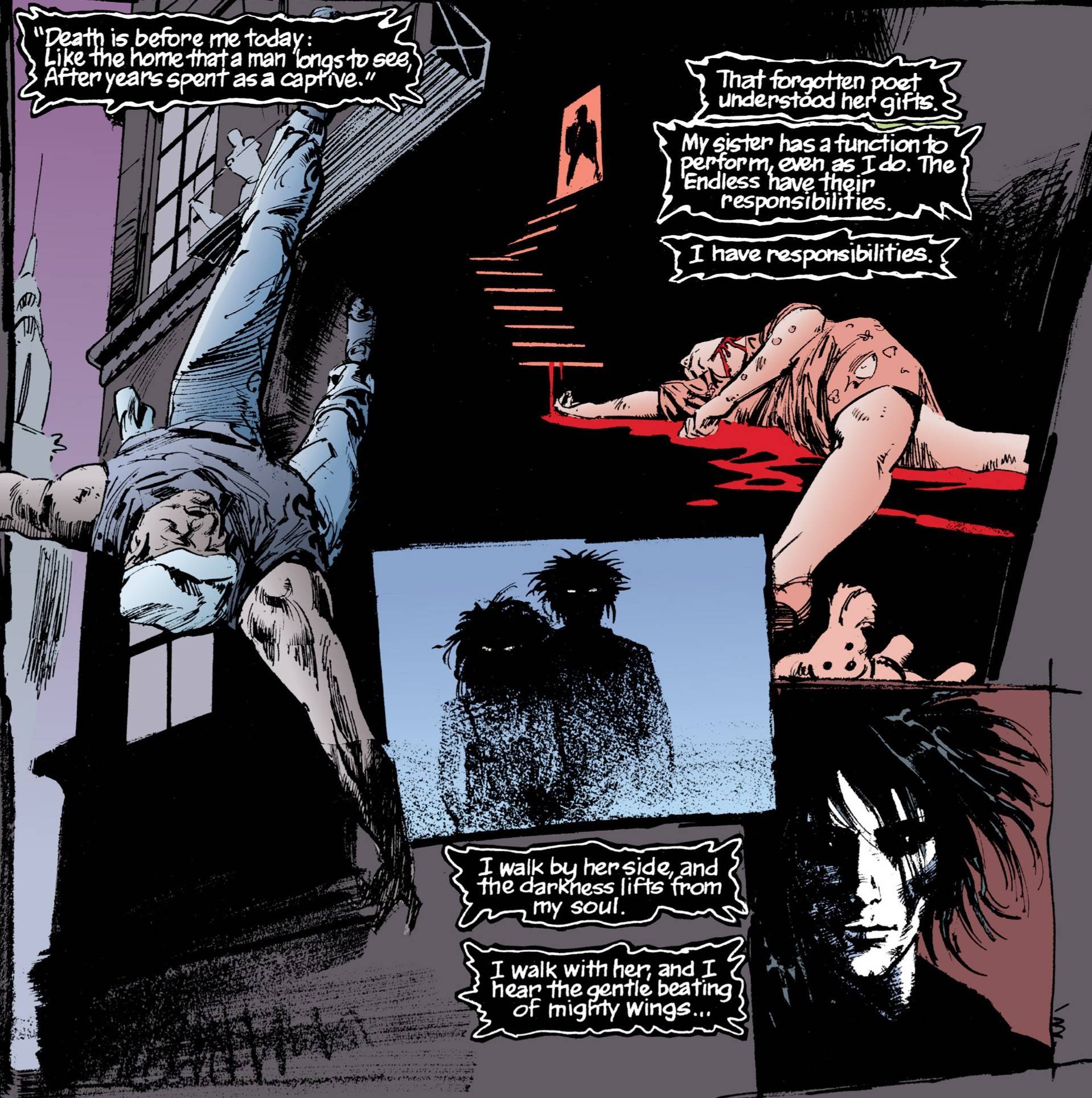 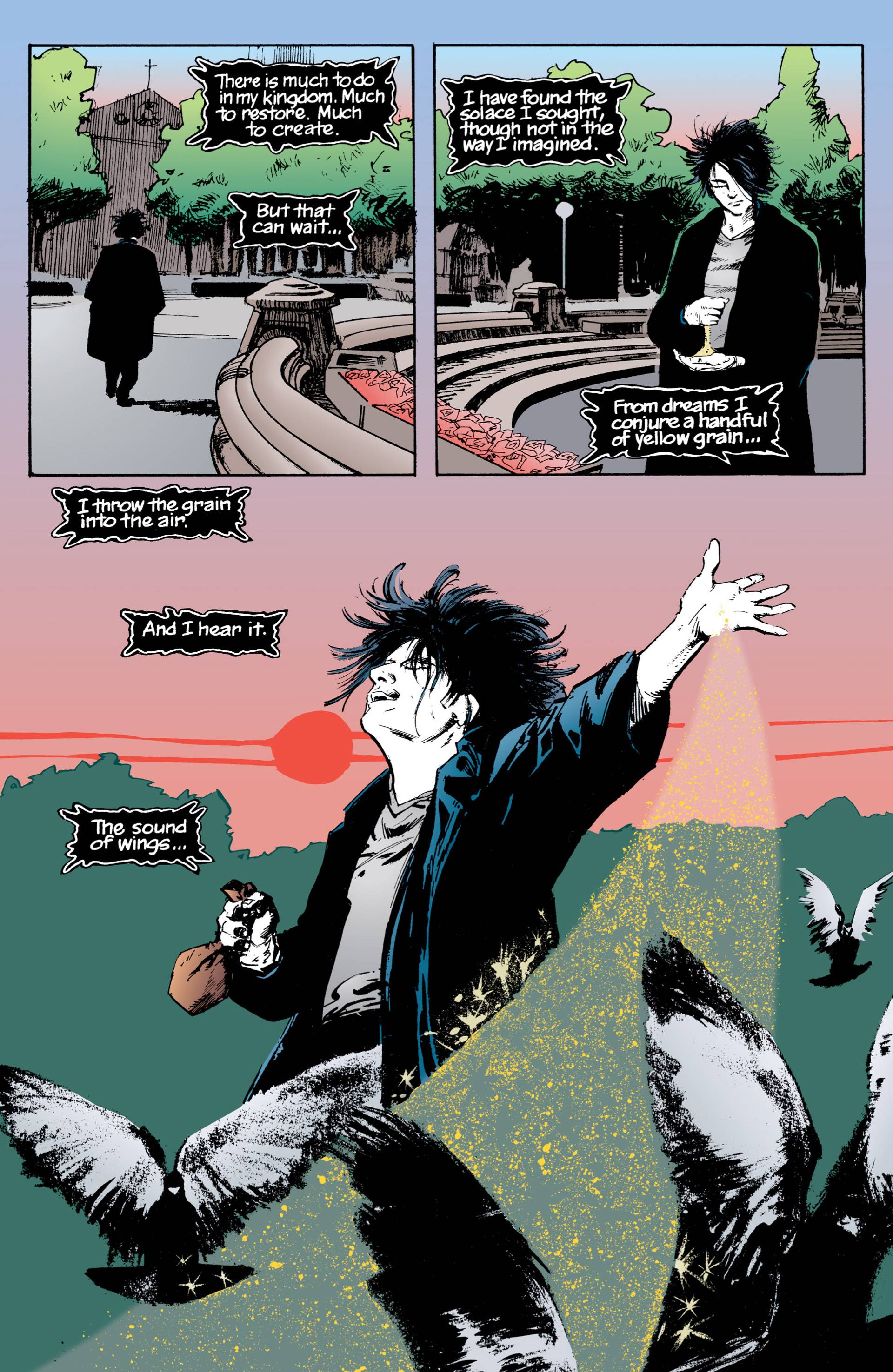 There is much to do in my kingdom. Much to restore. Much to create.
But that can wait...
I have found the solace I sought, though not in the way I imagined.
From dreams I conjure a handful of yellow grain...
I throw the grain into the air.
And I hear it.
the sound of wings...

The solace in this case would be the realisation that the purpose of his existence is his duties - and indeed, throughout later volumes he gets into all sorts of trouble precisely because he takes his duties way too seriously. He is the most responsible of all of the Endless, save perhaps Death (why not Destiny? That guy doesn't do anything, he just hangs around with his book!).

In fact, his responsibilities is what (spoilers!)

got him killed. If it wasn't for responsibilities, he could've fought the Furies, and possibly even defeated them while in the Dreaming. But taking into account the damage to the Dreaming and the dreamers, he chose to give up his existence to allow the next aspect of Dream to take his place.

Overall, no, Morpheus is not in state of existential crisis, and no, Gaiman (for all we know) wasn't influenced by Heine.

Not the answer you're looking for? Browse other questions tagged inspiration neil-gaiman the-sandman morphine or ask your own question.