When and where did Thomas Mann say that Effi Briest is one of the six best novels in his library?

Theodor Fontane's novel Effi Briest is often taught at German schools. The Wikipedia article about the novel has a section on the novel's legacy which says,

[Thomas] Mann said that if one had to reduce one's library to six novels, Effi Briest would have to be one of them.

The source for that statement is identified as "Mann, Thomas (1968). Das essayistische Werk". However, that is actually a set of eight volumes. (The Spanish Wikipedia article about the novel also contains this claim, but no source is given.) Which specific essay or publication included in that work contains the claim mentioned above?

(I have worded the question as "... in his library", even though the quote does not seem to refer to Mann's own book collection, because I assume that the books he has in mind were actually in his library. However, I consider this detail less important than the actual source of the statement.)

Thomas Mann's article "To Theodor Fontane's 100th Birthday" was published in Berliner Tageblatt on 25-Dec-1919. There you can find the quote:

A novel library of the most rigorous selection, and even if it is limited to a dozen volumes, to ten, to six - it shouldn't miss "Effi Briest".

You can read the article using the DFG-Viewer.

Hoping that print-screen is allowed, here is the page from Berliner Tageblatt: 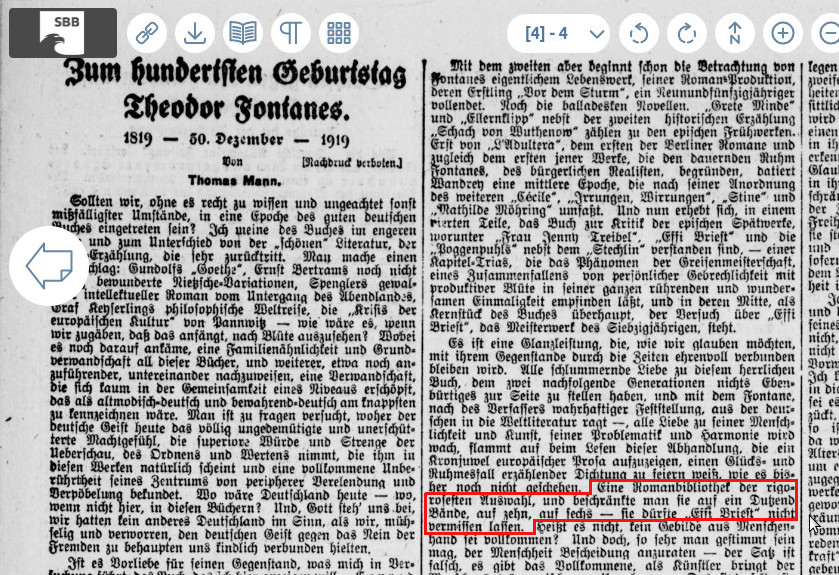 Not the answer you're looking for? Browse other questions tagged german-literature reception theodor-fontane effi-briest thomas-mann or ask your own question.

26
When and why did the Brothers Grimm start collecting fairy tales?
2
Where did Rilke say or write "The purpose of life is to be defeated by greater and greater things"?
7
What is known about the last book Theodor Fontane worked on?