What is the reason for partial highlighting in "The Sandman"?

I was just re-reading Preludes and Nocturnes, the first volume of Neil Gaiman's The Sandman. In the story titled The Sound of Her Wings, the following conversation takes place: 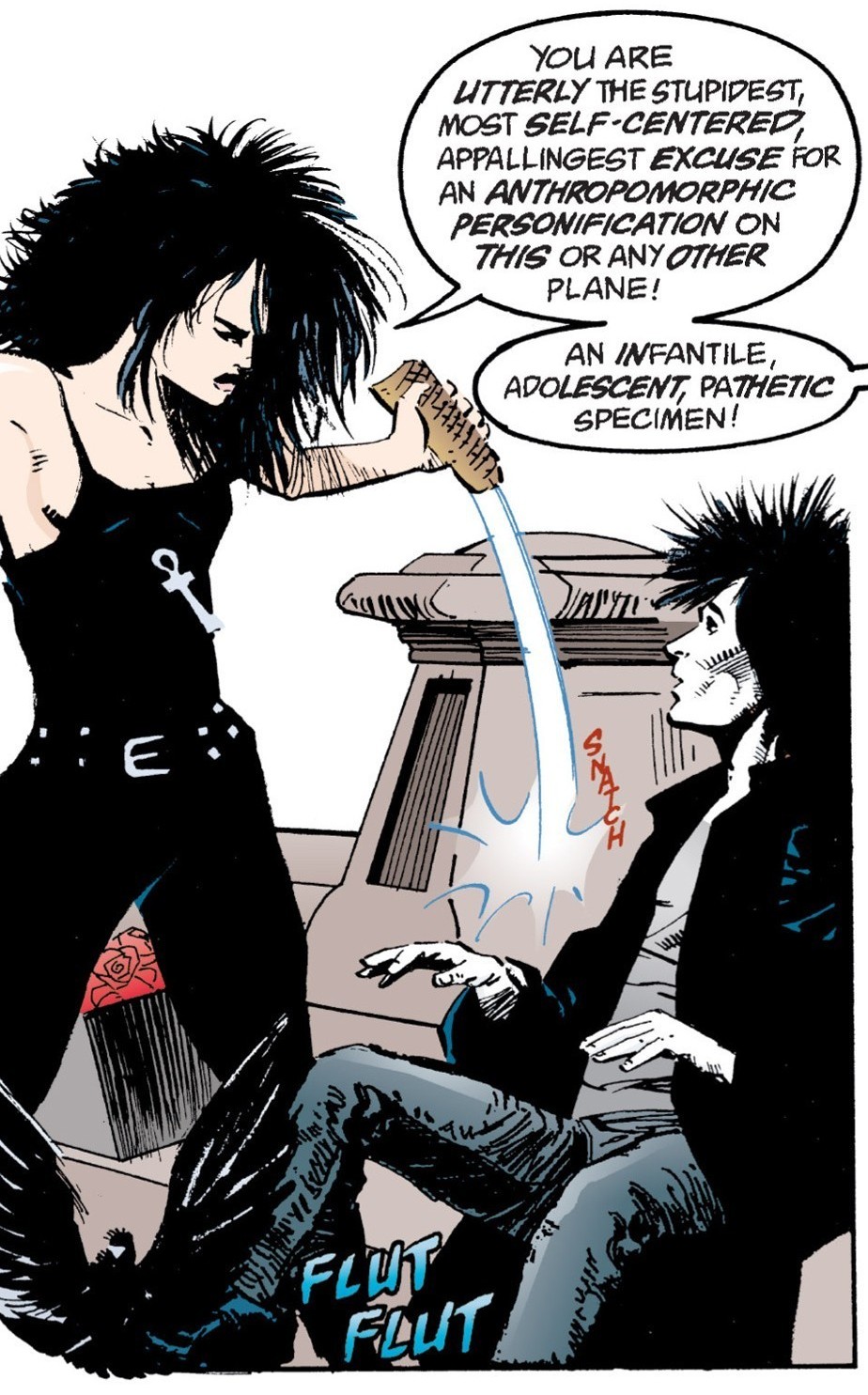 Death: You are utterly the stupidest, most self-centered, appallingest excuse for an anthropomorphic personification on this or any other plane!

Here's the part that interests me:

What is the reason for "bolding" only certain parts of these words? Are we supposed to read them by placing stress on these parts, or is it something else?

The reason I ask is because I have never before seen only a part of work being highlighted, unless it was needed to point a mistake (oh, my dear essays).

Yeah, you've basically got it. They're syllabic stress indicators.

Comics are pretty text-light for how information-dense they need to be. So, tricks like this are used to highlight tonal shifts where they might not otherwise be immediately obvious.

There's even a TVTropes page about this. Especially when trying to convey emphasis, even in such a high quality print as the Sandman series, just italicizing words isn't going to cut it. When you're talking about a part of a word rather than the whole thing, this problem only gets worse. So partial bolding is used instead to indicate stress.

What @Emrakul said, but also because Todd Klein did the lettering.

Letterers don't get much notice or respect, but Klein is something of a rockstar in his field.

I believe Will Eisner was the first important letterer (although he was also, obviously, an author and artist, and hugely significant if the award named for him is any indication.)

With Sandman, my understanding is that Gaiman was pushing the boundaries of the form, presumably following the lead of Alan Moore, and opening the way for later, post-modern comics. Klein has written about how the expanded requirements of Gaiman's groundbreaking work required a new approach to lettering.

You can even see in influence in recent subtitling of films, breaking out of the boring white lettering on the bottom. (There are several recent examples that escape me now, but John Wick 2 used such an approach.)

9
What's up with the colors of Delirium's speech bubbles?
10
What does Dream's ruby represent?

3
In Neil Gaiman's "The Sandman", what do the Three Sisters represent?
10
What does Dream's ruby represent?
14
What's the significance of the witches' name change in Sandman?
6
Does part four of Doll's House add to the narrative of the volume?
9
In "The Sandman", what are nightmares for?
7
Do "The Sandman" and "Lucifer" deliberately share the number of published issues?
13
Why are comic books listed under PN ("general literature"), and not under authors' respective categories in Library of Congress system?
4
What is the origin of Endless' lettering styles in "The Sandman"?
4
What is the origin of Dream's helm in Neil Gaiman's "The Sandman"?