How much weight should we give authors' declarations of their intent after the fact?

Very closely related: How much weight is given to authors' intentions in literary analysis?

Related (as an example of what I'm talking about): Is there any textual evidence to support that Dumbledore was gay?

Also related: Discussion in the comments on this answer.

One more example: Ray Bradbury says Fahrenheit 451 isn't about censorship. Is he right?

Certain authors, such as J. K. Rowling, are notorious for making declarations about the meaning of their text after the fact. One notable example is Rowling's claims that Dumbledore was gay. From what I've read, most people's reaction to that claim fell into one of three camps: that's great, that's terrible, and "no, she's wrong." I'm particularly interested in the "no, she's wrong" camp.

To the extent that authorial intent is relevant to meaning (and I do realize that that's a controversial point), how much weight should we give to authors' later declarations on meaning? Does there have to be some evidence that they intended that at the time that they actually wrote the book and/or some kind of indication in the text that that their claim is actually true?

To give a concrete example, does it even matter that J. K. Rowling claims that Dumbledore's gay? How much weight (if any) should we give that claim?

Another concrete example: J. K. Rowling has released additional background material (allegedly used as part of her research for the books) - e.g. character sketches, etc. Is there validity to using those for interpretation (or do we just say "no, not part of the text")?

Have there been any cases where an author's later claims about the text were clearly refuted?

Important note: I'm not asking about how authorial intent in general is related to meaning (that was already addressed in a linked post) - just how much weight later declarations that aren't clearly settled by the text should be given (like J. K. Rowling's claim).

The way that this question is worded implies a particular theory about how literature is interpreted (that is, it's a theory-laden question). The implicit theory seems to be that we interpret literature by treating it as if it were documentary evidence for a fictional universe. In this theory, there is a single fictional universe, and our task as readers is to determine facts about that universe by interpreting the texts we are given.

The question asks about how to resolve the difficulty that arises when there are multiple texts apparently describing the same fictional universe: in this situation we have to decide which texts are canonical and which are not. The theoretical picture thus looks like this: 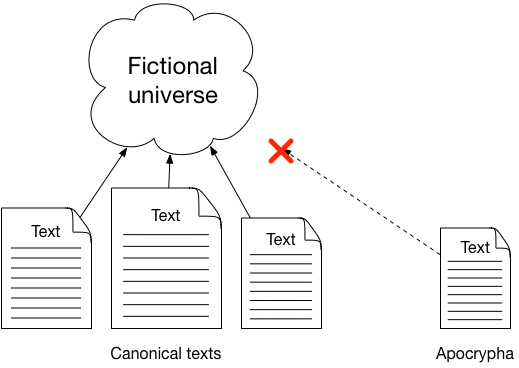 (I am not suggesting that you necessarily believe this theory. But the question as asked only makes sense within a picture like this.)

This theory resembles the situation in history, where what actually happened is a matter of fact, but our knowledge about what happened is based on a collection of unreliable and incomplete texts (combined with physical evidence like archaeology and genetics). In history, when we ask a question like, "did Richard III order the murder of Edward V?", we know there is a fact of the matter even if our texts don't give us any confidence in what it is.

But is this really the best theory about literature? When we ask a question like, "Did Heathcliff murder Hindley Earnshaw in Wuthering Heights?", there is no fact of the matter independent of the texts. We are free to imagine a fictional universe in which Heathcliff murdered Hindley, and also to imagine a fictional universe in which Hindley died accidentally. The theoretical situation is more like this: 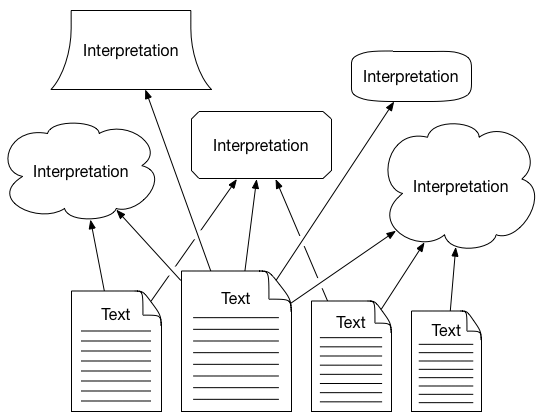 How much weight you should give to an author's declaration about intended meaning or interpretation depends on the theory of literature you espouse. In a related question, I briefly discussed E. D. Hirsch's brand of intentionalism.

However, most literary theories simply ignore authorial intent. In How to Read Literature (Yale University Press, 2014), Terry Eagleton discusses several reasons why authorial intent does not settle the question of a literary work's meaning.

One can use authorial intent to guide one towards an interpretation, but most of the time, such statements are not available. Literary theory typically ignores it.

Not the answer you're looking for? Browse other questions tagged theory authorial-intent or ask your own question.

2
Do literature interpretations actually reflect what the author had in mind?
49
What is Tom Bombadil's importance in The Lord of the Rings?
39
The author of a literary work disagrees with critics about meaning—who's right?
31
Is there any textual evidence to support that Dumbledore was gay?
16
Ray Bradbury says Fahrenheit 451 isn't about censorship. Is he right?
10
Is it reasonable to use the movie version of a book to interpret the book when the same author wrote both?
16
Was Susan ever able to return to Narnia?
19
How much weight is given to authors' intentions in literary analysis?
8
Should Go Set a Watchman change our view of Atticus defending Tom Robinson?
4
Did Plutarch Heavensbee actually not know the details of the Quarter Quell?
See more linked questions

19
How much weight is given to authors' intentions in literary analysis?
39
The author of a literary work disagrees with critics about meaning—who's right?
6
How can readers ascertain that they have identified the author's intent?
10
Is it reasonable to use the movie version of a book to interpret the book when the same author wrote both?
3
Is Paul Fry correct in saying that modern hermeneutic approaches largely developed due to the Protestant Reformation?
3
Why is the separation between literary criticism and literary theory controversial?