I read an English adult book about around three to four years ago (it seemed quite fresh at the time) which was about a seventeen-year-old boy in the early 20th century, who was shot and became immortal after seventeen minutes underwater, albeit functionally dead. He has certain relations with a film star in the twenties which causes him to lose functionality in certain areas.

The book has a sequel as well, which I remember entails him taking a job from NASA on the Hermes spaceship as he can't die. He is also attacked by chainsaws in the sixties from enemies he made decades earlier and loses an arm.

The front cover had a steampunk-esque aesthetic though, with sun rays and the like. Both books were hardbacks, relatively thick (maybe about a thumb's length). I ordered them from a library. Any idea what these books could be?

The Death and Life of Zebulon Finch: Volume One by Daniel Kraus 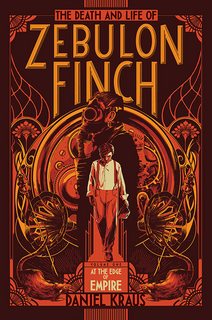 The 625+ page novel follows the exploits of Zebulon Finch, a petty thug and criminal who’s killed at the age of 17…but somehow he doesn’t exactly die. Precisely seventeen minutes after he’s shot, Zebulon wakes up. He can’t feel pain, he doesn’t age, and his body is decaying (albeit very slowly). Zebulon doesn’t know why he’s been chosen for this particular fate, and, most of the time, doesn’t particularly care to find out. Through the novel, he’s forced to be a member of a traveling show, gets shut in a lab by a mad scientist, fights in World War I, and hobnobs with the elite of Hollywood’s Golden Age, among other exploits.

Not mentioned in the summary above, he falls into the waters of Lake Michigan after being shot, which would match your memory of him being underwater. In the second book, he does indeed join NASA. I haven't seen any references to chainsaws in reviews, but he does apparently start a cult in the desert based on cannibalism, specifically giving of your own flesh to others, and learns a bit more about the person who shot him.

Found with a search for immortal teen shot "seventeen minutes"

10
Story about father who looks through microscope for the first time
10
Story about a man who wins three bets with the devil
2
Told from the point of view of an old man who lives alone and rarely goes out, written by a Scandinavian author
4
Book about a runaway kid who lives in a hollow tree
7
Looking for a short story about painters who fake a death
6
Book about a 10/11 year old boy with autism or something similar
8
Who is the 'Immortal Hale' in William Cowper's The Task?
7
Appalachia, Chicago, 1920s, Gertie, 3 year old child run over by train in rail yard