What were Bulgarian biscuits?

In Zinky Boys (track 7 in the audiobook), a female doctor complained that the girls she stayed with mostly talked about things like rubles, foreign currency vouchers, and how to steal meat and other food (e.g. smoked sausage and Bulgarian biscuits).

When I search for this on Google, I get mostly recipes for various kinds of cookies (especially honey spice cookies - for example, this).

What were Bulgarian biscuits exactly? Are the honey spice cookies I see recipes for similar to what the book was referring to?

I found a a copy of the Penguin translation online so I was able to read a bit more context around the reference. (I won't link the online copy since it seems like it must be a copyright infringement.)

It doesn't definitively answer your questions, but this from the same woman's account:

Our diet was potato paste, and frozen meat that had been stored in army food depots since time immemorial – from the old reserves, it was as hard as wood, colourless, odourless

makes it seem that they talked about smoked sausage and biscuits, but in a longing way because there were no sausages and biscuits to be had.

Although she also says:

A girl who worked as a cook used to bring meat from the mess and stick it under her bed.

‘Wash the floor,’ she said.

‘I washed it yesterday. It’s your turn today.’

‘Wash it, I’ll give you a hundred roubles.’

I didn’t say anything.

The evidence from the text is that the food available to them, legitimately or otherwise was absolutely dreadful, mere fuel. So they fantasized about home luxury foods, better meat, sausage with flavour, indulgent biscuits... there are references elsewhere in the text to people bringing their mother's home-made biscuits with them when they first arrive in Afghanistan.

As to why the biscuits are Bulgarian, it may be as simple as the fact that the Bulgarian Black Sea coast is a popular tourists destination with Russians, so it may be that people have enjoyed them there, brought them back as gifts, or they just percolate into the culture once a certain proportion of the population become familiar with them, like how you can't move in UK coffee shops these days for Pasteis de nata.

If this is correct then the kind of biscuits you were finding recipes for, honey and spice cookies, is almost certainly what was being conjured up.

My guess is this kind of thing: 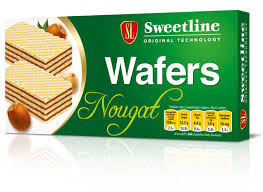 I don't speak Pashto at all, but I found some Persian references to "Bulgarian wafers" (ویفر بلغاری) that appear to describe this kind of wafer cookie.

My Tehrani sources tell me they've never heard the phrase "Bulgarian wafers" and that they only ever call these things "wafers" (ویفر). But also that these kinds of snacks are very popular in Iran. Seems reasonably likely that they're also popular in neighboring Afghanistan.

8
How were notes sent from classroom to classroom in Up the Down Staircase?
2
What were the "Leicestershire clowns"?
6
In "Candide", are Prussian officers recruiting for the Bulgarian army?
5
Were there really such camps in India as attempts to prevent overpopulation?
5
What is Krosyn?
2
What was the long list of names in the beginning of "Zinky Boys"?
3
Why were Afghanistan veterans treated so poorly relative to World War II veterans?