The word “flat” is used here in the sense

If you weren’t familiar with this sense of the word, you might guess it from the description of the landscape earlier in the chapter:

Ours was the marsh country, down by the river, within, as the river wound, twenty miles of the sea. My first most vivid and broad impression of the identity of things seems to me to have been gained on a memorable raw afternoon towards evening. At such a time I found out for certain that this bleak place overgrown with nettles was the churchyard; […] and that the dark flat wilderness beyond the churchyard, intersected with dikes and mounds and gates, with scattered cattle feeding on it, was the marshes; and that the low leaden line beyond was the river; and that the distant savage lair from which the wind was rushing was the sea; and that the small bundle of shivers growing afraid of it all and beginning to cry, was Pip.

As discussed in this answer, the graveyard scene in Great Expectations was inspired by Dickens’ visit to St James’ Church in Cooling, Kent. The area between Cooling and the River Thames is part of the North Kent Marshes, which look like this today: 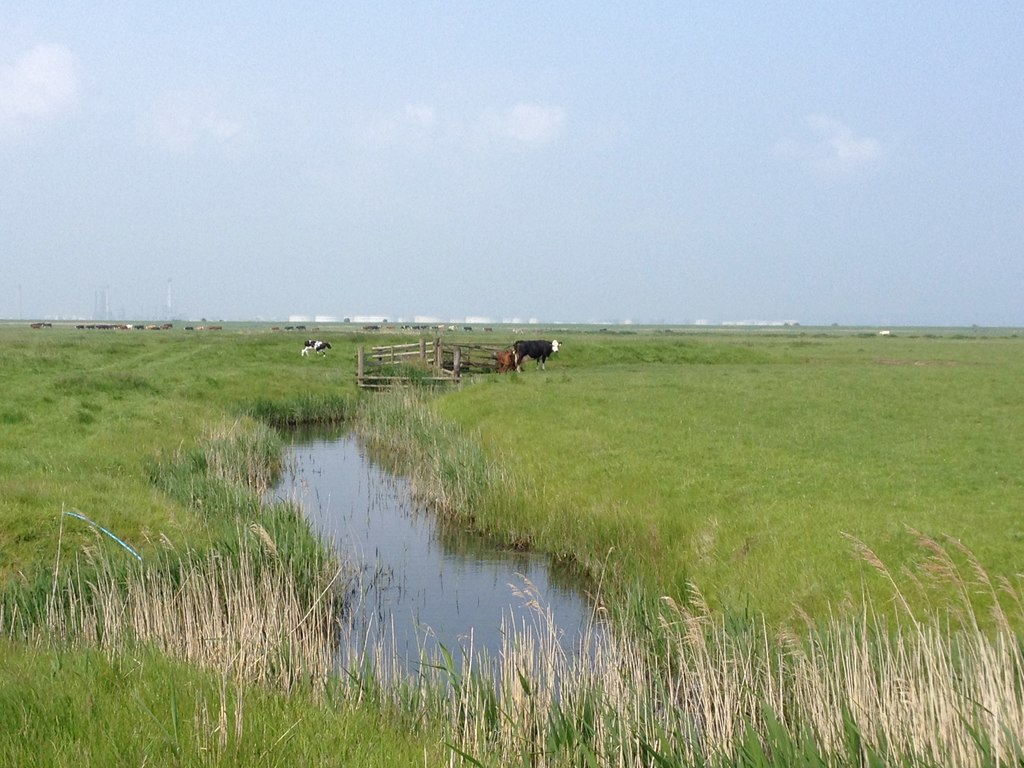 (Photo by Chris Whippet, licensed under CC BY-SA 2.0.) Two hundred years ago, the landscape probably looked much the same, except that on the horizon, rather than the chimneys and storage tanks of Coryton oil refinery, you would be able to see the sails and masts of ships on the Thames.

So in the quoted passage, the speaker plans to spend the night hiding in this landscape, until Pip can bring him a file in the morning. It is going to be cold and wet and very unpleasant for him, but a frog or eel would find it comfortable, or so he imagines.

That speech is a response to Pip's "good night".

Here I believe "Much of that!" is short for "[Not] much [chance] of that!" (although this is not a common contraction, so I may be mistaken).

The meaning I infer here is that the speaker does not think there is much chance of him having a good night, given that he is going to spend the night on a "cold wet flat" (marshland). He suggests (with black humour) that he would feel more at home there if he were a frog or an eel.

5
What does "...they had all been born on their backs with their hands in their trousers-pockets..." from mean?

10
In Great Expectations, who is the man at the pub in Chapter Ten?
1
"That’s because you’ve already made your wish." What does it mean?
4
What does "in coarse gray" and "iron" mean here?
7
Meaning of "put in all the salt and pepper"
3
Does "Great Expectations" refer to the sport of cricket, in the scene of Joe meeting Pip in London?
4
What does "a sort of Hercules in strength and weakness" mean?
5
What does "...they had all been born on their backs with their hands in their trousers-pockets..." from mean?
8
What does "Some people do the same by their religion" mean?
1
What does, "The period of exaggerated reaction consequent on all public wrongdoing..." mean?