In Chapter 34 of The Kingdoms, Kite goes on this musing about religion:

The golden dome of the cathedral at Cadiz showed, just. He had been trying not to stare at it as much as he'd been trying not to stare at the flagless masts of the Royal Sovereign. As of this morning, he hadn't been ashore for twenty months and two days. He had never wanted to with any particular exigency, but Cadiz was different. It wasn't home; he'd moved too often to have a home except wherever the majority of his clothes were, but it was a place he liked, and whenever he did look, he wondered if the same priests were there. He had started, since getting here, to want to go to a real Mass again, in a real church instead of the bleak grey English ones with their boneless English parsons. There was something off-putting about faith with no backbone and only just enough teeth to get through a cucumber sandwich.
Chapter 34

Why is "cucumber" specified as the type of the sandwich here? I don't see any particular reason for it to have been chosen over any other kind of soft filling. I suspect that there may be some historical reason for the choice - the author sprinkles other little historical references around - but I don't know much about that time period at all.

As for what historical times might be relevant - Kite was born in the early 1770s a Catholic and essentially grew up sailing with first the Spanish navy and then the English one (as far as I can tell; multiple timelines partially told by flashbacks are confusing). He delivers this paragraph in 1805, shortly before the French change history to win Trafalgar. While both sides of the war have had access to information about the future for some years at this point, it wouldn't have been long enough for major cultural changes. I think, anyhow.

Cucumber sandwiches, specifically, are a stereotypical part of English "posh" culture, along with afternoon tea and "More tea, vicar?"

Cucumber sandwiches formed an integral part of the stereotypical afternoon tea affair. By contrast, people of the era's lower working classes were thought to prefer a coarser but more satisfying protein-filled sandwich, in a "meat tea" that might substitute for supper.

Some writers have attempted to draw out an association between the daintiness of the sandwich and the perceived effeteness of the UK's aristocracy. Cucumber sandwiches are often used as a kind of shorthand in novels and films to identify upper-class people, occasionally in a derogatory manner. [...] In addition, the sandwiches were once considered appropriate delicacies to offer to visiting clergy, in times when such visits were still a common feature of English middle class life.

The popularity of the cucumber sandwich reached its upper-class zenith in the Edwardian era, when cheap labour and plentiful coal enabled cucumbers to be produced in hotbeds under glass through most of the year. With the declining popularity of tea as a meal in the United Kingdom, there was a corresponding decline in the popularity of cucumber sandwiches, but they are still frequently served at teas, luncheons, and gatherings.

Note that it's not just part of upper-class English tradition, but relates specifically to the practice of inviting clergymen around for tea. This explains why it would be used in that specific sentence about English parsons.

You've already noted that cucumbers are a soft filling, but it's worth emphasising that traditional English cucumber sandwiches would be particularly tender and easy to bite into. They'd often be prepared thinly cut, with the crust of the bread and/or the peel of the cucumber removed, so there's literally nothing to bite through except soft white bread and cucumber flesh. 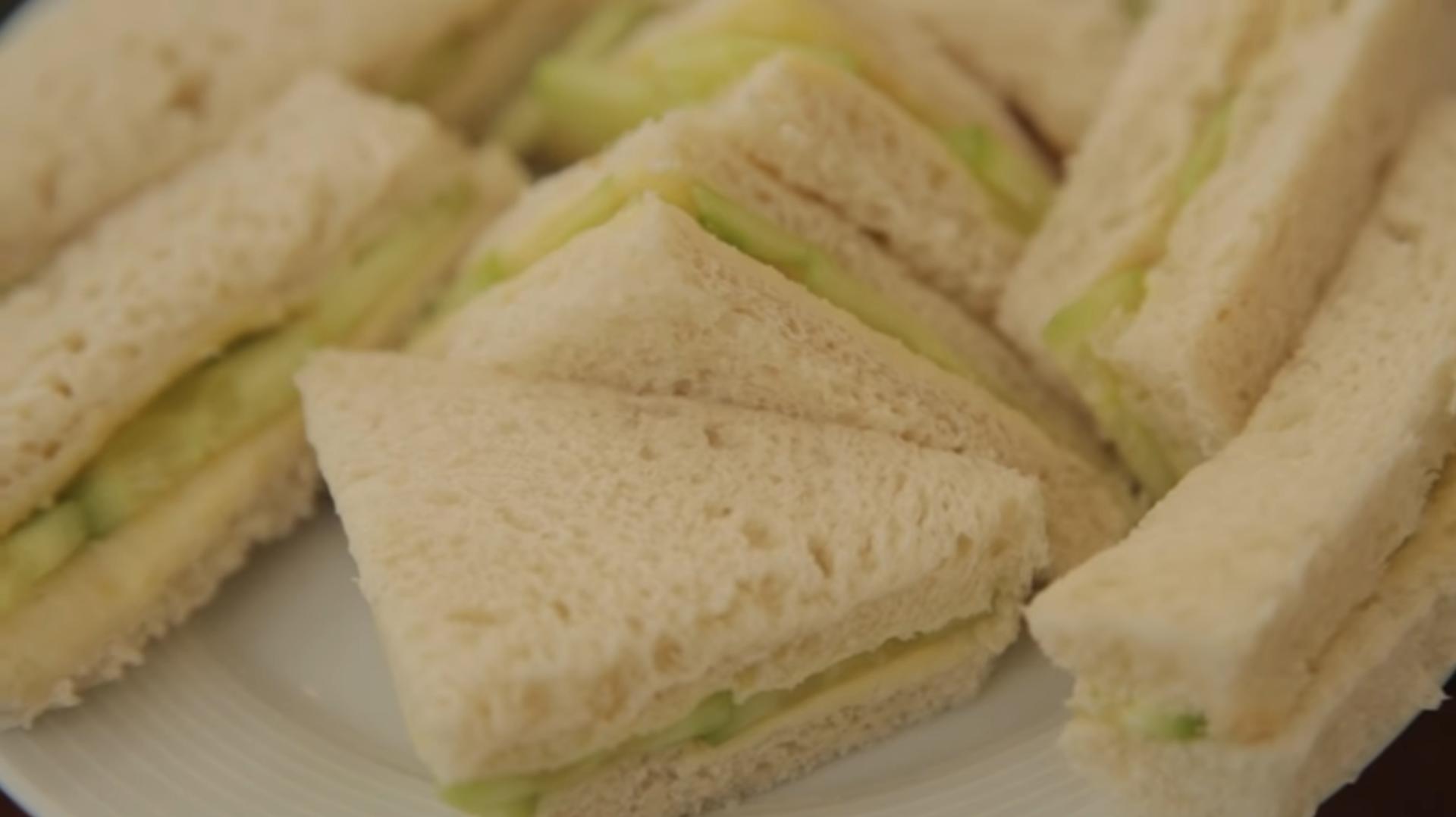 Image source: this video on how to make a traditional English cucumber sandwich.

Even though cucumber sandwiches were at one point associated with poshness, as Rand al'Thor writes, I don't think this is the association on which the passage is based. Nothing in the passage indicates that it is about poshness or about the English upper classes, so that association seems irrelevant.

Instead, it's the characteristics of the food itself that matter here. As Tine Hreno writes in her blog post The Rise and Fall of the Cucumber Sandwich (8 August 2013),

The most important thing is that the sandwich should be thin.
For this reason, a denser white bread is preferred. The density of the bread helps to maintain the structural integrity of slice, which should be cut thin enough that, when you hold it to a window, the sun can shine through it.

When preparing a cucumber sandwich, you remove the cucumber's peel and the crusts from the bread. In other words, you remove anything that would provide some real resistance to your teeth. A person may be toothless, both in the literal and the figurative sense, and still be able to eat cucumber sandwiches. Being toothless and spineless ("faith with no backbone and only just enough teeth to get through a cucumber sandwich") are two forms of weakness that most people look down on. Hence their association in the same sentence from Natasha Pulley's novel.

But why would the Anglican faith be described like this? Probably because it came into being not because of a specific religious or philosophical vision but out of convenience. When the Pope did not grant Henry VIII an annulment of his marriage Catherine of Aragon, the king had Archbishop Cranmer declare the marriage null and void, and Henry VIII separated the Church of England from Rome. This created a type of Catholicism without the Pope, into which Protestant elements were introduced later. One of these is that priests or vicars, as they came to be called over time, were allowed to marry. From this point of view, the Church of England may be said to be spineless because it is not based on principled religious or theological standpoints and mixed and matched aspects from different forms of Christianity as it saw fit.

Other answers have focussed on physical characteristics of a cucumber sandwich, and on the history, but have missed the most relevant point.

It is about the blandest food available, and is almost completely absent of flavour

The OP's quote links the types of food to personal characteristics. Spanish food commonly uses spices such as paprika to give the food a "kick"; and this quote associates more robust, vibrant food with a more robust, vibrant personality in the people eating it. By contrast, English vicars are seen to eat extremely bland food, and therefore are associated with having extremely bland personalities and a lack of depth to their religious beliefs.

Why would this come about? Simply because many English vicars genuinely did not have strong religious beliefs. Parishes paid tithes to the Church, which in turn put a value on being the vicar of a parish. The oldest son of an aristocratic family inherited the family estate, which provided them with a living; for younger sons, the military or the Church were the only two socially-acceptable careers to finance their lifestyles. (Actually working at a job or going into "trade" was seen as socially distasteful, for a social class who considered themselves above such things.) Younger sons would therefore be bought a parish and would become its vicar, regardless of whether they actually had any religious convictions at all.