What is a term for an (occasionally lengthy) passage set between chapters?

In The Forgetting*, there are passages from books (mostly the main character's diaries) set between the chapters.

They generally serve to provide exposition about the world or backstory for the main character and her family. Closer to the end (presumably once all the necessary expositing was done) they shift to be shorter and more concerned with mood-setting than information delivery. Even the mood-settings retain the conceit of being diary entries, taking the form of short lines or paragraphs of diary musings.

These diary entries are visibly set apart from the main story: they have a different background color, italicized and monospaced text, and are spatially on entirely different pages. Each is vertically centered on its page, further emphasizing that this it is the centerpiece of its own section, not connected to anything else. Here's one of the shorter examples: 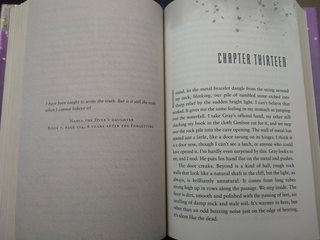 Thus I'm not sure if epigraph would apply. While the diary entries could be seen as coming before the chapters (and indeed there is one before Chapter 1 but not after the end of the last chapter), it is more natural for me to see them as occurring between the chapters. They do not appear between the "Chapter X" headings and the main text, or even on the same pages as the regular story.

They're also certainly not all short. With a copious amount of handwaving and being-too-lazy-to-check, I would estimate the average length was half a page. The longest fill the whole of their pages: 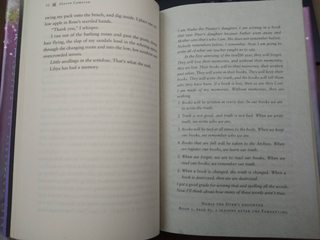 Is there a term for this? Does it fall under the umbrella of "epigraph", or is there a distinction made since it isn't part of chapters but instead between them, or because of its length, or anything else?

A similar thing takes place in the companion novel The Knowing, but here there are three distinct common sources for the passages (three different in-world logs), not every chapter has a passage before it, and some of the passages extend to two pages.

In-universe diary entries between chapters also feature in Scythe, for an example from a different series.

* I'm sure I've seen things like this elsewhere, but I can't recall any other specific examples at the current time.

While not typically used to refer to novels Interlude is a good fit.

According to Dictionary.com an interlude is an intervening episode, period, space, etc..

While it is most often used regarding plays or (a bridge in) music, extending its use to literature should bring no confusion.

Not the answer you're looking for? Browse other questions tagged terminology or ask your own question.

27
What's it called when a short quote appears at the beginning of a chapter?

0
What is the correct term for "fine words"?
3
Is there a formal term for "mispronunciation as a comedic device"?
2
What is the term used for a story's narrator becoming self-aware?
3
Term for wordplay: frictionless trade vs tradeless friction
8
Term for intentionally impressing different meanings on different audiences