I have been collecting some nice facsimiles of Samuel Johnson's 1755 Dictionary of the English Language. Several very nice versions have been printed in recent decades by various publishing houses.
One by Longman in 1990. It comes in two large folio volumes with slipcase and is bound in red cabra leather. Does anyone know how many sets of these were published?

Folio Society published a very high-end edition in 2006. Only 1000 sets were published. They are numbered in the colophon.

But, my main query concerns a two-volume folio "Fourth Edition" set that was published by Librairie du Liban out of Lebanon (yes, the Middle Eastern nation north of Israel) in 1978. They appear to be a limited edition and were printed only in 1978. This is the ONLY 1773 Fourth Edition facsimile I am aware of. Together, the books weigh over 23 pounds and measure nearly 17 inches tall, likely in line with the dimensions of the original. They appear to be fairly scarce and the covers come in dark blue or light blue and the spine labels in either red or black (I wonder if the red may be the rarest).
I read somewhere that this company was then a division of Longman but has since gone its own way, but is still in business. 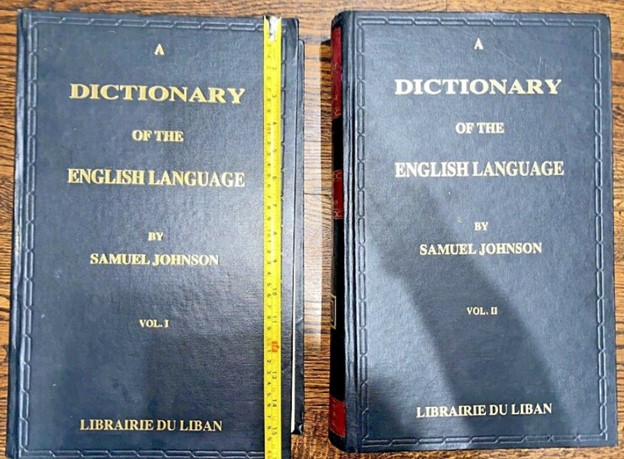 Browse other questions tagged samuel-johnson dictionary-of-the-english-language or ask your own question.

2
Why did Johnson scoff those "who toil at the lower employments of life" in the preface to his dictionary?