I read this one as a child, in the mid 1980s, in a book about the dimensions of a coffee table book, but only about 20-30 pages long. The main character is a young boy, with two parents and at least one sibling, who likes to build things, which annoys his family because he builds them inside the house. I remember there being a bald eagle habitat in the living room, and something involving ropes and levers and paintbrushes that I think incorporated mechanisms from something his father needed. What he built was largely from planks nailed together, I remember. Fed up after being told off again for creating his constructions in the house, he decides to run away from home. After heading to a field via a route that I remember included the phrase "catty-corner", he builds himself a house to his own specifications. Bit by bit, the other kids in the neighborhood migrate there, and offer him goods or services to build them their own houses, built to their specifications. I remember there being a mix of boys and girls, which each house built for their hobbies, and surprisingly intricate.

Eventually, the parents realize that all of their children have disappeared, and organize a search party for them. I think the book ends with the parents finding the miniature neighborhood and expressing newfound appreciation for the one child's innovation. I vaguely remember some lines about the difficulty some parents had squeezing into their child's new home to inspect it. I don't recall if it was implied that the building of the houses happened over a single day or a longer period of time.

The cover was limited color, maybe black and white and green, and the interior was non-cartoonish drawn artwork, maybe pen-and-ink, fairly elaborate in its design, maybe one illustration to a page. The personalized homes of the children were given especial details. 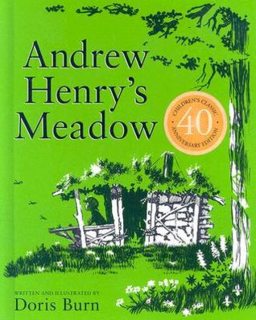 Andrew Henry has two younger brothers, who are always together, and two older sisters, who are always together. But Andrew Henry is in the middle--and he's always with himself. He doesn't mind this very much, because he's an inventor. But when Andrew Henry's family doesn't appreciate him or his inventions, he decides it's time to run away. Many children in the neighborhood feel the same way and follow him to his meadow, where he builds each of his friends a unique house of their very own. But in town the families miss their children and do everything they can to find them. And the kids realize that it feels a little lonely out in the meadow without their parents.

6
Help me identify a story about a boy who flees to an island with his friends
12
Creepy children's illustrated book, like Jumanji, about boy waiting for parents to come home with new baby, sees faces in walls
3
Novel about boy facing the apocalyptic beliefs of his family
6
Looking for a book (possibly a pair of them) with whimsical illustrations of misheard phrases
6
Book about a 10/11 year old boy with autism or something similar
6
Story about siblings crossing the United States on foot