Story ID: Brother and sister go back to colonial times

This was a Scholastic-type book, probably about 5th-grade level. I would have read it in the 1980s.

I remember there were a brother and sister, possibly in upstate New York. They either found or fell into a cave, inside of which were hazelnuts. They ate? the nuts, and this transported them back to Colonial times. They ended up living with a friendly family until they could get back to the cave/hazelnuts to return to the present. I think the settlers were Dutch or German.

There was one bit I remember vividly: upon arrival, they were taken in by a family, and saw something like a coal scuttle. When one of them asked what it was, the neighbor laughed and said something to the effect of "Well, if you're living with this family, no wonder! A coal scuttle is for carrying live coals from one house to another when your fire goes out, and Mrs. [Name] has never let that happen! Her fire has burned for years!" Later in the book, the family has rushed out for some emergency and forgotten to bank the fire. They run back, the woman feeds and fusses over the fire, and finally finds one coal poking out like a glowing eye:

She sat back on her heels. "X years," she said proudly, "and still it burns!"

There were a few monochrome illustrations — maybe in brown? — and the one I remember is just after the two have transported back to the present. The brother is standing and the sister is sitting on the ground of the cave, knees up, head on her crossed arms, and he notices her Colonial-style dress and her long hair spilling over her shoulders and back.

I would really like to read this again, so please let me know if this sounds the least familiar. I've Googled every combination of keywords I can think of.

Is this Caroline D. Emerson's The Magic Tunnel? 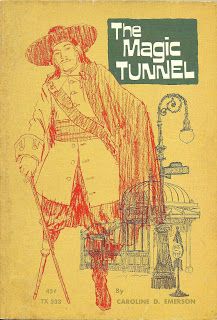 The broad outline of the story sounds exactly the same as what you've described, although the bit with the cave and the nuts doesn't seem to match (they go back in time by using a subway train in New York) and the bit about the fire is too minor to be mentioned in any of the descriptions I've found.

First off, I Googled "brother sister new york eat nuts time travel colonial". That led me to this forum thread, where someone asked about what sounds like exactly the same story:

This was in the late 60s or early 70s. It's about two kids - brother and sister - who live in contemporary New York. They hear a story that if you stand in the very front of the lead car in a subway train and make a wish it will come true. They wish themselves to the Dutch Colony of New Amsterdam in 16-whatever-it-was. They find out how hard colonial life was, they have some adventures, and then they go back to modern New York before they get stuck in the past or change history or something.

The answerer linked to this Amazon page, which has a few not-very-informative reviews. I also found this Goodreads page, which is a little more helpful and descriptive:

15
Juvenile literature about a group of children living in a castle, looking for a treasure
12
Story about two siblings who run away from home and stay in a museum at night
2
Short story (or maybe a small book) about two students kidnapping a teacher
7
Short story where people are handicapped in the name of fairness and equality
8
Book set during the Black Death: nine travellers each with a secret
2
Novel with a spy/assassin who helps the grand-daughter of a Nazi hunter, speaks Basque from learning it from a book, escapes a cave through water