In R.L. Stevenson's Treasure Island's chapter "Cruise of the Coracle", Jim sails northward (due to northward current) from Haulbowline Head past the the Cape of the Woods and that is when he beholds Hispaniola. After this there is a sentence

the current was bearing coracle and schooner southward at equal rate.

How could the current bear southward as it was earlier mentioned northward?

meaning robert-louis-stevenson treasure-island
Share
Improve this question
edited May 30 at 17:48

As far as I can tell, it does seem that you've uncovered an inconsistency or mis-writing on Stevenson's part. Let's analyse the whole journey carefully, using a map of Treasure Island for reference: 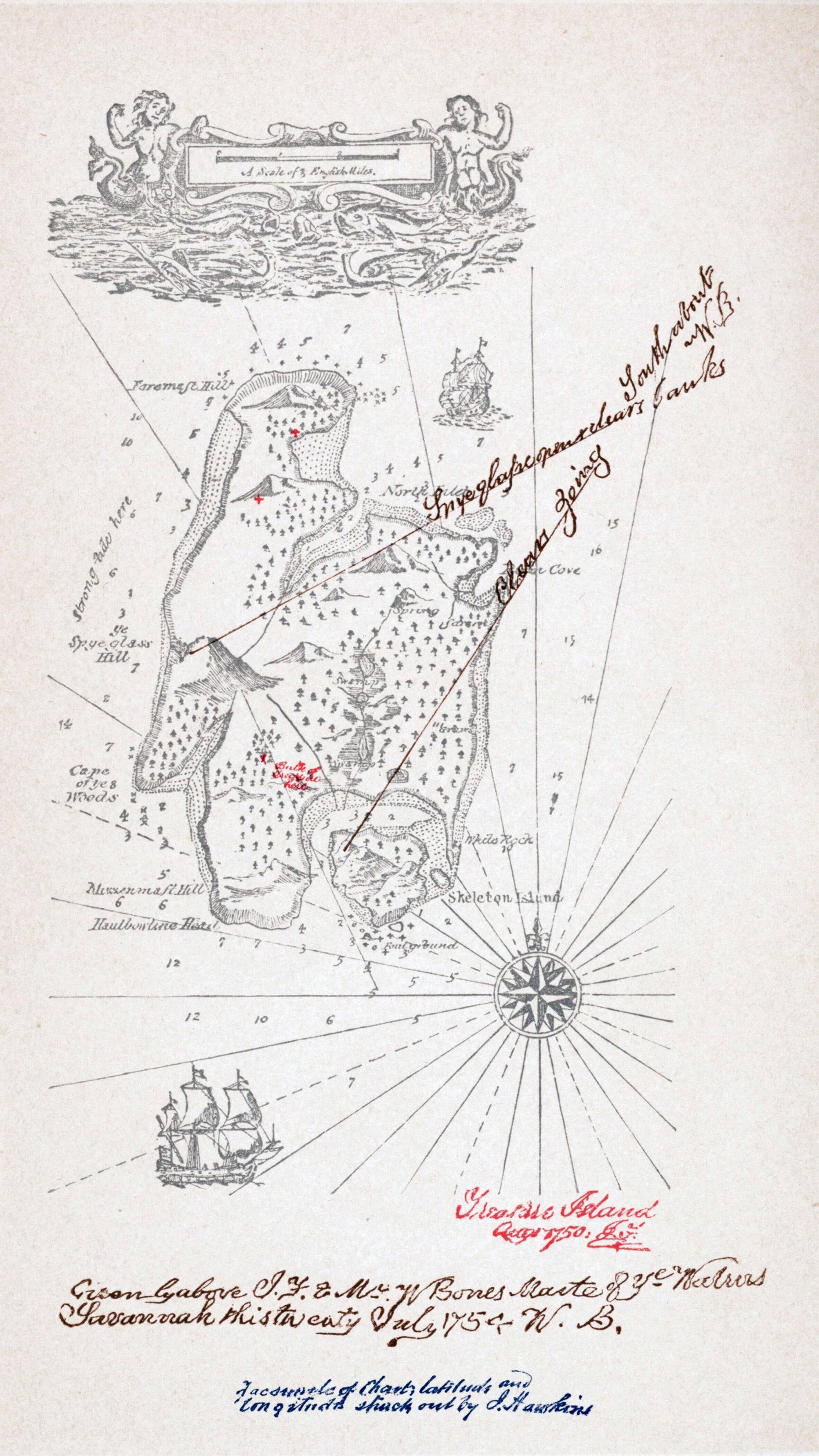 At the start of Chapter 24, Jim wakes up in the coracle at the southern end of the west coast of the island:

I awoke and found myself tossing at the south-west end of Treasure Island. [...] Haulbowline Head and Mizzen-mast Hill were at my elbow, the hill bare and dark, the head bound with cliffs forty or fifty feet high and fringed with great masses of fallen rock. I was scarce a quarter of a mile to seaward, and it was my first thought to paddle in and land.

He moves northwards along the coast, under the influence of the current and wind which are both in agreement to carry him from south to north, towards the Cape of the Woods:

In the meantime I had a better chance, as I supposed, before me. North of Haulbowline Head, the land runs in a long way, leaving at low tide a long stretch of yellow sand. To the north of that, again, there comes another cape—Cape of the Woods, as it was marked upon the chart—buried in tall green pines, which descended to the margin of the sea.
I remembered what Silver had said about the current that sets northward along the whole west coast of Treasure Island, and seeing from my position that I was already under its influence, I preferred to leave Haulbowline Head behind me and reserve my strength for an attempt to land upon the kindlier-looking Cape of the Woods.
There was a great, smooth swell upon the sea. The wind blowing steady and gentle from the south, there was no contrariety between that and the current, and the billows rose and fell unbroken.

When he first sights the Hispaniola, "in front" or to the north of him, she is facing northwest and her sails are drawing (intransitive verb, meaning 4b: "to swell out in a wind"), before she swings to face west and then presumably more southwards, against the wind:

When I first sighted her, all her sails were drawing; she was lying a course about north-west, and I presumed the men on board were going round the island on their way back to the anchorage. Presently she began to fetch more and more to the westward, so that I thought they had sighted me and were going about in chase. At last, however, she fell right into the wind’s eye, was taken dead aback, and stood there awhile helpless, with her sails shivering.

For some time, the schooner swings around in different directions. She's able to make speed when she's facing in a direction anywhere near north, to catch the wind blowing from the south, but she keeps returning to face into the wind. This must be due to the current, which is going northward and would, in the absence of steering, tend to push her broader stern towards the north.

Meanwhile the schooner gradually fell off and filled again upon another tack, sailed swiftly for a minute or so, and brought up once more dead in the wind’s eye. Again and again was this repeated. To and fro, up and down, north, south, east, and west, the Hispaniola sailed by swoops and dashes, and at each repetition ended as she had begun, with idly flapping canvas. It became plain to me that nobody was steering.

The wind and current at this point are both tending to go from south to north. They're still on the west side of the island, where the current is pushing them northwards. So it seems that the sentence you highlight is simply mistaken, and it should be "northward" not "southward".

After Jim and Israel Hands get the ship properly underway in a controlled manner, in chapter 25, they follow the wind northward to round the northern end of the island and tack back southward (against the wind) into the North Inlet:

In three minutes I had the Hispaniola sailing easily before the wind along the coast of Treasure Island, with good hopes of turning the northern point ere noon and beating down again as far as North Inlet before high water, when we might beach her safely and wait till the subsiding tide permitted us to land. [...] The breeze served us admirably. We skimmed before it like a bird, the coast of the island flashing by and the view changing every minute. Soon we were past the high lands and bowling beside low, sandy country, sparsely dotted with dwarf pines, and soon we were beyond that again and had turned the corner of the rocky hill that ends the island on the north.

So the wind is definitely going from south to north, and it was already stated that the wind and current are in agreement ("no contrariety") along the west side of the island. The only "equal rate" the current is taking them southward is a negative one!

Not the answer you're looking for? Browse other questions tagged meaning robert-louis-stevenson treasure-island or ask your own question.

8
What could be the possible reason behind “live in fear” and “move at liberty” in the fourth stanza of “A German Requiem”?
4
How to envisage 'battlements of the escarpment'
2
The House Was Quiet And The World Was Calm by Wallace Stevens quote interpretation
2
Understanding Shyam Saran's “How India sees the world”
1
How was Thangorodrim “broken” in “The Fellowship of the Ring”?
2
What does “There was so much I could not get enough of, so much I would never be able to grasp or possess, no matter how much I tried.” mean here?
3
How do you become aware “of the earth as poetry”?
1
How could “chaperonage” be the right of a girl?
0
Meaning of “Low down on the sky was a narrow band of apricot, all that was left of the daylight.”
9
How was the free-born Englishman prevented from taking his ease in his inn in 1922?