The first three sentences of O. Henry's Gift of the Magi are as follows:

One dollar and eighty-seven cents. That was all. And sixty cents of it was in pennies.

Can we figure which of these is the case:

There used to be a three-cent piece.

Assuming that "The Gift of the Magi" is set in the US at around the time of its publication in 1905, there was a three-cent piece which was still minted until 1890. That's the closest non-multiple-of-five-cents coin to the period, although there was also a two-cent coin which stopped being minted a little earlier, according to the following helpful chart from the US Mint: 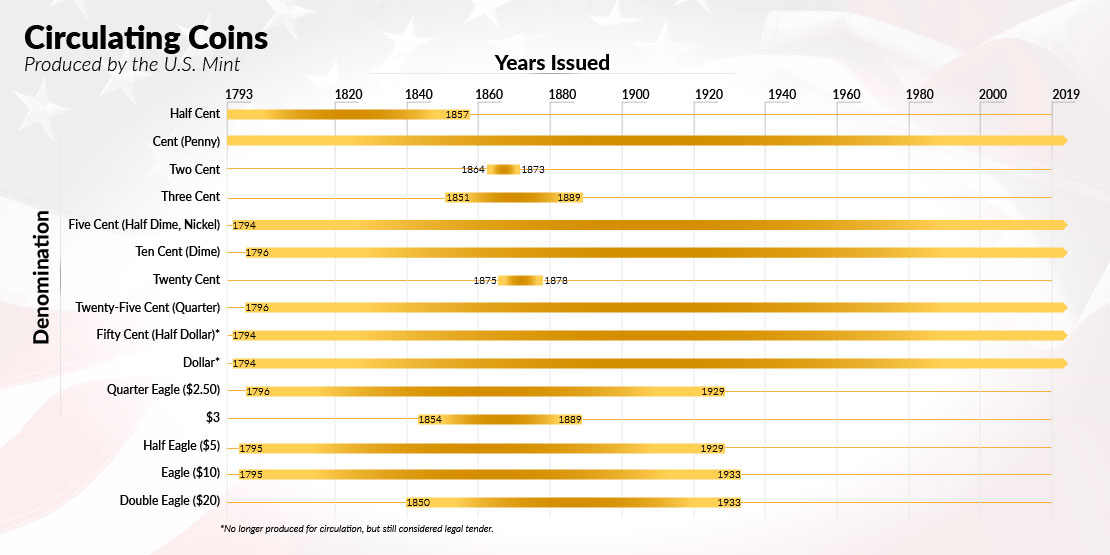 If the story is set around 1905, then three-cent pieces might well still have been regularly in circulation, even if they weren't being minted any more.

Or the "sixty cents" might not have been a precise figure.

It makes sense for Della to count up the total precisely, down to the cent - hence the exact figure of one dollar and eight-seven cents - so that she'd know how much she had and what she might be able to buy with it. But there's no particular reason for her to remember if it was exactly fifty-seven cents or sixty-two cents that were in pennies: around sixty cents of her total being in pennies would be a precise enough figure to get the point across.

A quick look at Wikipedia lists a few obsolete coins which could be involved here, beyond the half cent:

Given the story was published in 1905, the three cent nickel could have been still in use. As I understand it, all of these are still legal tender in the US, so it wouldn't be surprising if some of these were still in circulation 15-30 years after they stopped being issued.

Gift of the Magi was published in 1905. As others have already identified, the US had a two-cent piece until 1872 and a three-cent piece until 1889 (but with much lower production after 1875). The US does not demonetize coins: those coins are still legal for payment today (though I expect that they're worth a lot more than faith value to collectors). A total of 127 cents in non-pennies is possible if it involves two- or three-cent pieces in addition to perhaps higher-value coins.

Wikipedia, with citations of The Numismatist in 1909 and in 1954, indicates that about one third of the two-cent coins had been repurchased by the treasury by 1909, and that by 1954 “few alive could remember using a two-cent piece”. So in 1905, two-cent pieces would have been somewhat rare already, and this is likely true to some extent of three-cent pieces.

Now that we have the context, let's look at the text. This is the opening of the short story, so I expect the author was especially careful when writing it.

We're told the amount twice. There's no room for errors or imprecision. There were definitely 60 pennies, not one more.

And apart from the pennies, some of the coins must be of a type that hasn't been minted in a couple of decades. This would have been apparent to a contemporary reader. Della has either been saving for a long time (perhaps not, since later the author tells us that “She had been saving every penny she could for months”), or she's trading with people who've been using small-value coins for a long time. She's not the kind of person who gets crisp notes from the bank.

The explicit and implicit information about the kind of coins Della has participates in making the reader understand that she's poor.

Technically, It doesn't state that the sixty pennies were the only pennies. There could have been 187 pennies, and "sixty cents of it was in pennies" would be true. If this assumption is removed, we don't have to spin our wheels over the composition of the other $1.27.

17
Short Story About a Woman Saving up to Buy a Gift?

14
How did Madeline Usher survive without food or water?
12
How many gables are there in the four-gabled house?
7
What does the phrase "the silent imputation of parsimony" mean in The Gift of the Magi by O.Henry?
6
How and why were pronoun genders changed in "Winter's King"?
5
How unreliable is the narrator in The Repairer of Reputations?
4
How does "How Nnedi Got Her Curved Spine" meet the definition of creative nonfiction?
5
How is Kimberly Clark a ghost in Janssen's "A Recurring Dream"?
4
How can Stella Salzman be Christian while her father Pinny Salzman is Jewish?
6
How to understand “a dumb or a talking brute” in The Ransom of Red Chief?