Is Babar an African or Asian elephant?

As a child I remember enjoying the Babar picture books about the eponymous elephant and his escapades. Now, many years later, it occurs to me to wonder what kind of elephants Babar and his people were: African elephants or Asian elephants. The Wikipedia page mentions Africa a few times, but also shiitake mushrooms which are native to Asia. Other animals featuring in the stories, such as rhinoceri and monkeys, are also found both in Africa and in Asia. I don't have any Babar book to hand any more to check its text (and more importantly illustrations) for clues as to the setting.

Is it clear from the original books whether they're meant to be set in Africa or Asia? Or is it kept more vague and general, just a civilisation of elephants without regard to real-world geography?

Inasmuch as Babar is from a specific continent, he's either from Europe or from Africa-as-perceived-by-Europeans-in-the-1920s. Which is not exactly Africa, but definitely not Asia.

Babar's adventures spanned many books and had multiple authors and illustrators over decades, starting with Cécile and Jean de Brunhoff and continuing with their son Laurent. They started out as bedtime tales that Cécile told to her children, which her husband Jean elaborated on and turned into illustrated books. As they are children's tales, they do not necessarily take place in the real world and they do not have the kind of internal continuity that you can expect from some science-fiction franchises.

In the first book, Histoire de Babar, Babar lives happily in a forest (p. 3, p. 4–5) until his mother is killed by a hunter (p. 6, p. 7). Other animals in the “forest” include not only monkeys but also a giraffe (p. 11). The depiction of the forest is clearly not realistic (it's more of a savannah with palm trees), but inspired from imagery of Africa, with animals gathering around a water hole. The hunter is a stereotypical safari hunter with a pith helmet. This is definitely happening in Africa as seen by its colonizers.

Out of story, Laurent notes that the stories may have been partly inspired by tales from cousins who lived in Kenya, and by visits to a zoo which had animals from France's colonies in Africa. (Granted, the zoo also had animals from elsewhere around the world.) (source: 80 ans de Babar – quelle histoire ?, via RFI)

Later, when Babar comes back to his native land, we get to see many other animals (p. 41, p. 42), most of which are native to parts of the African savannah (lion, gazelle, hippopotamus, dromedary, …). Babar becomes king of his village (p. 43), an African social structure (as seen through the eyes of Europeans).

In between, Babar is in the city. The city has French architecture (p. 9 ff.) and is home to white-skinned humans with a dress code similar to contemporary France (p. 10 ff.). This is a European city, but Babar could walk to it. In a later book, Babar et ce coquin d'Arthur, Arthur crosses overland from a kangaroo tribe to his homeland. This shows that the world of Babar does not have clearly defined continents as such. It does, however, have an America with specific features of the United States (Babar en Amérique).

Although the city is depicted as European, it has an African interpretation: the city represents the European civilization (humans, clothes, buildings, shops, books, etc.) which has reached the savage lands where Babar was born (animals, no clothes, no buildings, etc.). In the minds of a 1930s French reader, colonization evokes first and foremost Africa.

The depiction of elephants is more African than Asian, as all adult elephants have tusks, not just males (Babar's mother p. 3, Celeste p. 25, mothers p. 30). They have large ears which are not the rounded ears of Asian elephants (p. 6, p. 9 p. 30, …). The head is usually drawn as twinned-domed with a ridge at the top which is characteristic of Asian elephants (p. 14–15, p. 28–29, p. 35), but not always (Babar p. 11, p. 36–37). The lack of indent may either be due to a lack of detail in some images or due to the fact that the illustrator did not consider it significant. Jean de Brunhoff was likely working from multiple models, some African, some Asian. From what I can tell, Laurent kept the tusks and ears (which are how the French public expects elephants to look) but not the head ridges (which most readers would not pay attention to).

I don't know why the English Wikipedia page mentions shiitake mushrooms. This is either something that was added in the English translation or a plain mistake. In the original (p. 34), the species of the mushroom is not mentioned in the text (it's just a “bad mushroom”), and the picture is a fly amanita which probably the stereotypical poisonous mushroom in French culture (and perceived to be more deadly than it really is).

In the original story L'histoire de Babar: le petit éléphant (translated and published as The Story of Babar), his companion's absence is communicated by a 'vieux marabout' (an old marabous [bird]). 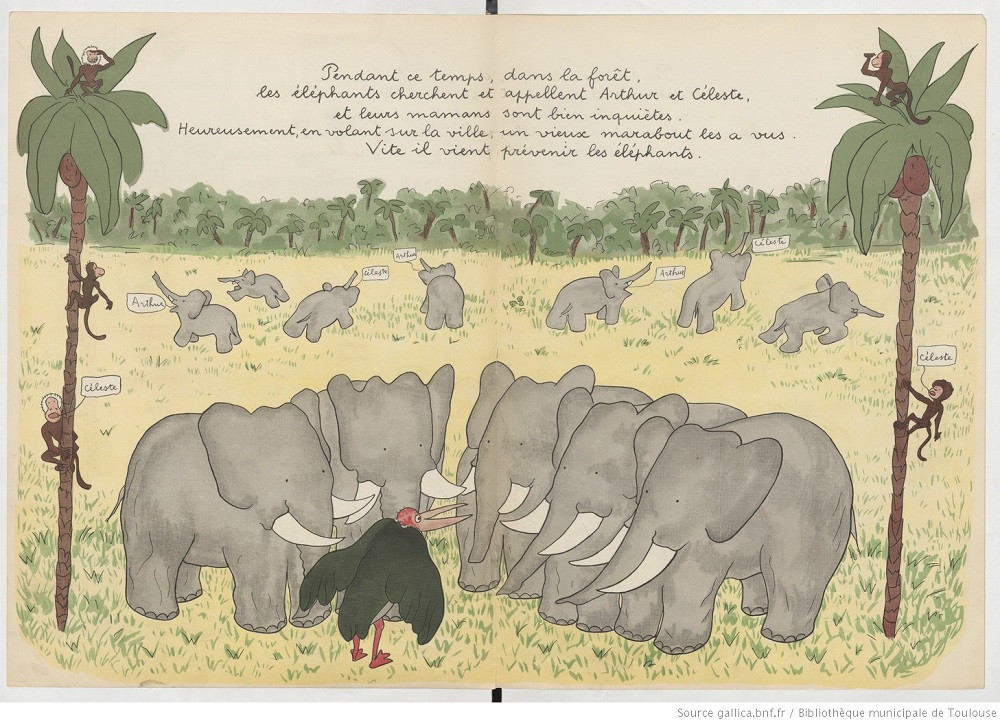 In a subsequent book, Babar and his Children, his son is saved from a grisly fall by a giraffe. 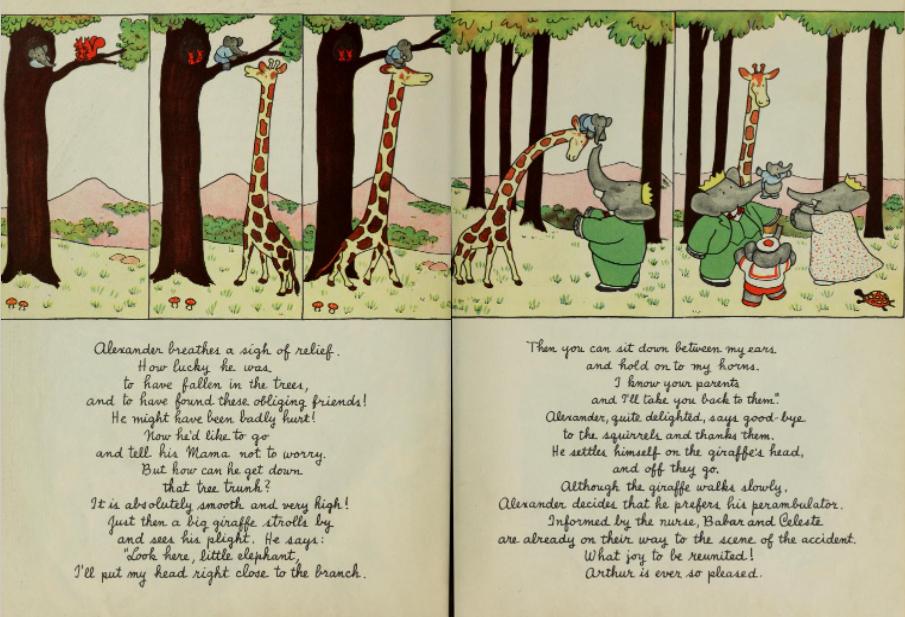 As both marabous and giraffes are, as we all know, only found in sub-Saharan Africa, this would indicate that Babar's point of origin is Africa and hence that he is an African elephant.

I submit that Babar is an Asian elephant on the basis of the artwork. 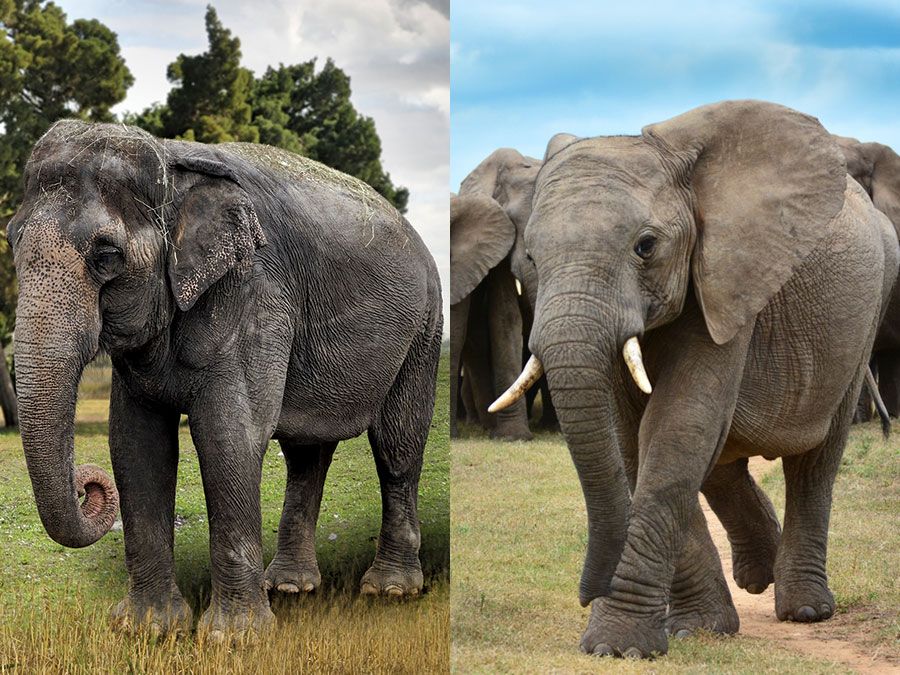 One can compare these facts with the illustrations in the Babar picture books. I don't have the books at hand, so I'll borrow an image from Valorum's answer to make my point:

It seems we have a winner!

In the other images I could find, the number of toes are not prominently visible, but the ears are always drawn smaller and distinctly not fan-shaped, and the head seems to be consistently drawn with a ridge.

Resources for my elephant facts

Not the answer you're looking for? Browse other questions tagged french-literature setting jean-de-brunhoff babar-the-elephant or ask your own question.