Mad Magazine comic strip about a boy pondering over existence (and "I think, therefore I am")

I'm trying to find a comic strip that originally appeared in Mad and was reprinted in a paperback collection of material from that magazine. I read it in the paperback collection. The strip shows a young man, high school or college age, alone in his bedroom. He is pondering existence. His thoughts are something along these lines: "Descartes says 'I think, therefore I am.' But how can I be sure? Maybe I only think I'm thinking." As he is pursuing this line of thought, his mother calls from downstairs: [Boy's name], dear, are you up in your room?" And the young man, irate, yells back: "HOW SHOULD I KNOW?"

I'm sure about the wording of the punchline, but the rest is paraphrase. The art was black and white line drawings. The paperback would probably have appeared some time in the 1970s. I think the strip was by Dave Berg and was reprinted in one of the many collections of his Lighter Side series for the magazine, but I cannot be sure.

I'm afraid I can't remember any more about the strip. Nor do I remember the cover of the paperback I read it in. But it would be good to know where and when it was published, which paperback it was reprinted in, and if it has been republished online.

There's an old auction listing for the original art at which gives the book as "Mad's Dave Berg Looks at Modern Thinking", 1969, p.122-125. It appears to suggest the art was created for the book rather than previously appearing in a magazine. 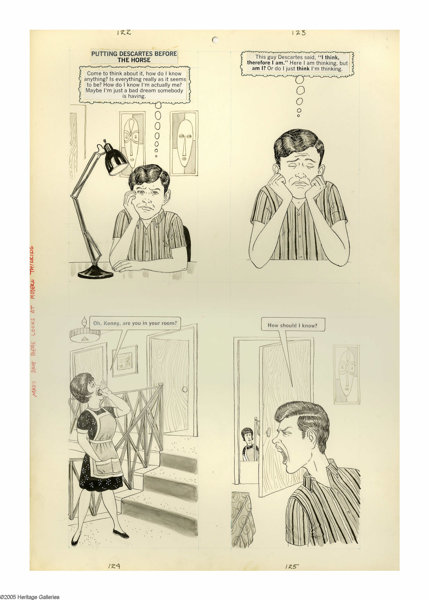 Not the answer you're looking for? Browse other questions tagged identification-request comics mad-magazine dave-berg or ask your own question.

10
Book about a boy who develops several accidentally destructive science projects
6
Trying to find a comic strip about "What your clothes say about you"
5
Young-readers book of short-stories from 1960s or 70s - "Teenaged Millionaire"?