What do you call the "message" written before a poem? 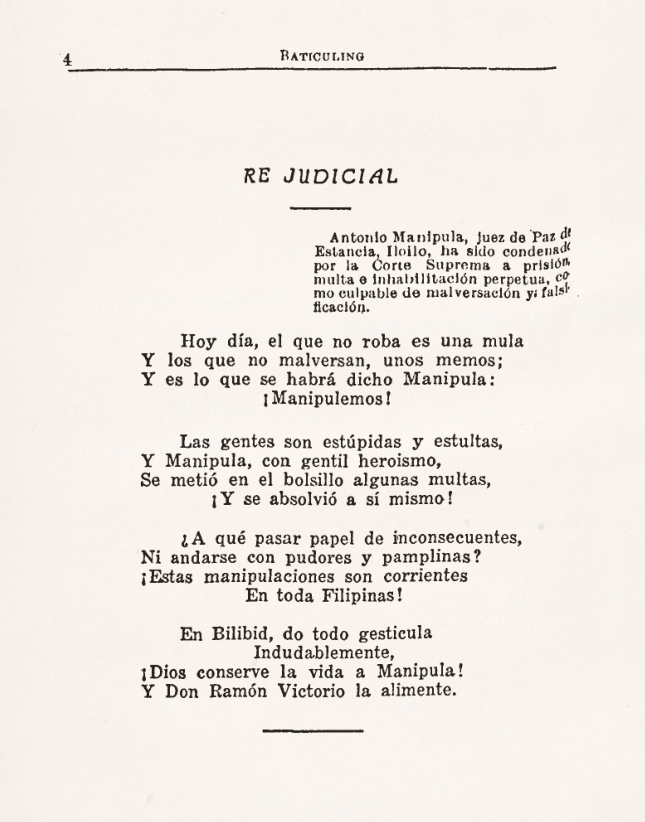 Before the first stanza, the author begins with a little message: "Antonio Manipula, juez ... y falsificación." This provides the reader with some background on what the poem is about: some judge named Manipula condemned for embezzlement and fraud. The first two lines say "these days, that who doesn't rob is a mule and those who don't embezzle are fools", and goes on in how such crimes are "ordinary" (corrientes).

What is the proper term for such a message?

This isn't limited to spanish-literature because I think that there are English poems with such a feature, although I can't find any.

poetry terminology
Share
Improve this question
edited May 4, 2021 at 4:57

These are very rare in English (I don't know how common they are in Spanish); I've identified two poems that have them. A word fr them is headnotes.

Some of these are arguments. From Wikipedia

An argument in literature is a brief summary, often in prose, of a poem or section of a poem or other work. It is often appended to the beginning of each chapter, book, or canto. They were common during the Renaissance as a way to orient a reader within a large work.

For example, Around the World in Eighty Days has an argument at the beginning of each chapter, the first one being:

IN WHICH PHILEAS FOGG AND PASSEPARTOUT ACCEPT EACH OTHER, THE ONE AS MASTER, THE OTHER AS MAN

If you need a name for a message at the beginning of a poem which is not an argument, you could use the word "headnote". The definition in Collins Dictionary is

which seems to fit.

They are probably not “epigraphs” — The Poetry Foundation defines epigraph as:

A quotation from another literary work that is placed beneath the title at the beginning of a poem or section of a poem.

This is a poetry-centered definition. You can have epigraphs before chapters and stories as well. However, they generally have to be quotes from some other work.

I also wouldn't call them prologues. There are some famous poems that have prologues: The Canterbury Tales, Piers Plowman, Robert Browning's the Two Poets Of Croisic. All of these are actually parts of the poem, written in poetry and not prose.

One poem I found with a headnote is Coleridge's The Rime of the Ancient Mariner, the original version. It starts out as follows, with what Coleridge calls an argument:

How a Ship having passed the Line was driven by Storms to the cold Country towards the South Pole; and how from thence she made her course to the tropical Latitude of the Great Pacific Ocean; and of the strange things that befell; and in what manner the Ancyent Marinere came back to his own Country.

The other poem I found with a headnote is by Richard Wilbur. It starts:

Ballade for the Duke of Orléans

who offered a prize at Blois, circa 1457, for the best ballade employing the line “ Je meurs de soif auprès de la fontaine.”

This poem, despite containing the line “I die of thirst, here at the fountain-side” is not a translation of one of the dozen or so Middle French poems we know containing that line, but a new ballade written by Wilbur.

Epigraph has already been mentioned in the comments. An example in a language other than Spanish was asked for.

This excerpt is from Dante's Inferno. T, .S. Elliot uses it to preface his poem The Love Song of J. Alfred Prufrock Many critiques of the Prufrock call the Dante excerpt an epigraph.

A prologue or prolog (from Greek πρόλογος prólogos, from πρό pró, "before" and λόγος lógos, "word") is an opening to a story that establishes the context and gives background details, often some earlier story that ties into the main one, and other miscellaneous information https://en.wikipedia.org/wiki/Prologue

While the above statement is prologue for a story, I found a statement that exactly matches your guidelines, in poetry itself.

'A prologue is a separate introductory section that comes before the main body of a poem, novel, or play, and gives some sense as to what's to come. ... The definition of prologue is opposite to that of the epilogue, a separate section of the text that provides a conclusion and answers questions.'

What is the proper term for such a message?

So that would be a prologue.

An epigraph meanwhile, is a poem before a story/novel selected by the author because of interest to the story that is to come.

And you are right, it is extremely tough to find a prologue in a poem. The closest I got what this -- (Which is entirely a prologue, acknowledging the comment by Peter Shor) 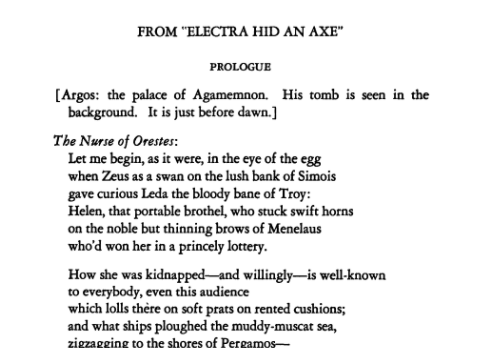 Not the answer you're looking for? Browse other questions tagged poetry terminology or ask your own question.

28
What's it called when a short quote appears at the beginning of a chapter?
7
What is a "proem", and why was this word used in the translation of the Kalevala?

5
Has Robert Frost ever written a poem that doesn't rhyme?
10
What makes a poem a Grook?
8
What do you call a break in rhyming in the middle of a book / poem for dramatic effect?
4
What do you call the pages in a comic book/graphic novel that expand on the lore, provide biographical information or have concept art?
0
Who is Tich Miller? What has happened to her? Why was this poem written about her?
4
Can you identify this poem about axolotl, fish, salamander
10
Identify a poem entitled Mock Song, written in middle English in the 13th-15th centuries
7
Poem-parody about O'Hare airport, written as though it were the Odyssey
4
Who are the pronouns referring to in the Mauritanian poem "You Will Tell Them"?