What does "perverse madonna" mean?

Polly was a slim girl of nineteen; she had light soft hair and a small full mouth. Her eyes, which were grey with a shade of green through them, had a habit of glancing upwards when she spoke with anyone, which made her look like a little perverse madonna. Mrs. Mooney had first sent her daughter to be a typist in a corn-factor's office but, as a disreputable sheriff's man used to come every other day to the office, asking to be allowed to say a word to his daughter, she had taken her daughter home again and set her to do housework.

What does this mean?

It may have a double meaning. Perverse can iteslf mean

contrary to the accepted or expected standard or practice.

(both definitions from Oxford Languages via Google)

Depictions of the Madonna predominantly show her with downcast eyes either in modesty or because all her attention is focused on her child. As in this painting, Rest on the Flight into Egypt by Gerard David in 1510. 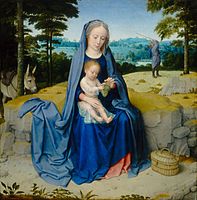 Upturned eyes may therefore be seen as contrary to the expected pose of someone whose youth and innocence otherwise remind one of a Madonna.

Additionally the upturned gaze may be seen as seductive or flirtatious, suggestive of a desire to behave in a way that would be unacceptable in a Madonna. 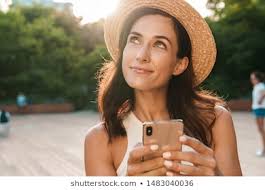 Not the answer you're looking for? Browse other questions tagged meaning short-stories james-joyce or ask your own question.