Meaning of "Like half the rest of the world, if more than half there be that are clever and good, Marianne ... was neither reasonable nor candid."

This passage is from Chapter 31 of Jane Austen's Sense and Sensibility, where Elinor contemplates the deficiency of sense and sensibility in Marianne, made evident by

her violent breakdown following the receival of a letter in which Mr. Willoughby coldly declares himself to have never imposed on her feelings, and the revelation of his engagement to a Miss Grey.

Elinor had not needed this to be assured of the injustice to which her sister was often led in her opinion of others, by the irritable refinement of her own mind, and the too great importance placed by her on the delicacies of a strong sensibility, and the graces of a polished manner. Like half the rest of the world, if more than half there be that are clever and good, Marianne, with excellent abilities and an excellent disposition, was neither reasonable nor candid.

With the omission of the bolded phrase, the last sentence is perfectly comprehensible; I'm sure it is so regardless, though if I have been able to understand the literal meaning, 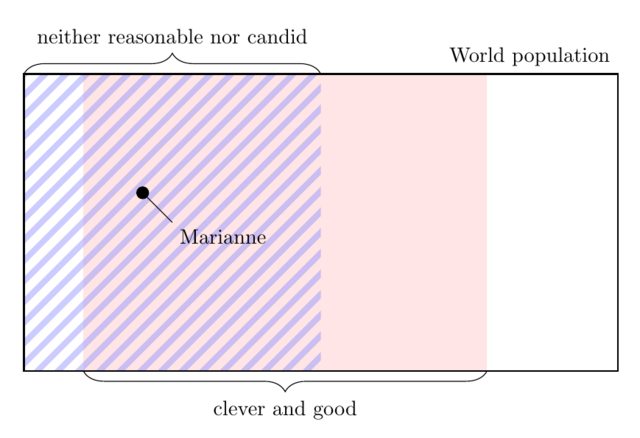 how it (i.e. the meaning of the sentence with the inclusion of the bolded phrase) bears relevance to the rest of the paragraph, and what it contributes to the reflection on Marianne's personality is foggy.
What is the accurate meaning of "Like half the rest of the world, ... nor candid", and how does it play into the theme of the introduction of this chapter?

A couple of points in the question need clarification. First, Elinor's thoughts are not about Marianne's reaction to Willoughby's letter. They are in response to Marianne's view of Mrs Jennings, their well-intentioned but interfering hostess in London. Marianne is convinced that Mrs Jennings' kindly interest in her situation is simply driven by a desire for gossip. Elinor thinks Marianne shows injustice toward Mrs Jennings.

Second, Marianne does not have a "deficiency of ... sensibility." On the contrary, she has far too much of it. Here is the definition of sensibility from Merriam-Webster:

2 : peculiar susceptibility to a pleasurable or painful impression (as from praise or a slight) —often used in plural

3 : awareness of and responsiveness toward something (such as emotion in another)

4 : refined or excessive sensitiveness in emotion and taste with especial responsiveness to the pathetic

Elinor thinks of Marianne as oversensitive, and says Marianne expects others to be just as sensitive as she. This leads her to be unjust in her judgment of others such as Mrs Jennings who are not as sensitive in their feelings or as refined in their manners.

Elinor says that in this, Marianne is like half the rest of the world. The quoted passage goes on:

She expected from other people the same opinions and feelings as her own, and she judged of their motives by the immediate effect of their actions on herself.

In other words, Marianne expects everybody to see things the same way as she does, and condemns those (like Mrs Jennings) whose feelings differ from her own. Marianne also cannot see beyond herself, and judges people's actions not on intrinsic merit but on how those actions make her feel. This makes Marianne like half the world, which also misjudges people similarly. According to Elinor, this is neither reasonable nor candid. Candid here is used in sense 2 in Merriam-Webster:

free from bias, prejudice, or malice : FAIR
// a candid observer

Not the answer you're looking for? Browse other questions tagged meaning jane-austen sense-and-sensibility or ask your own question.

3
Meaning of "'T was the boy's "mite," and, like the "widow's," may Perhaps be weigh'd hereafter, if not now"
2
What is the meaning of this sentence: ...for there was nearly half as much of the entertaining as of the contemptible about the man
0
Regarding a conversation between Miss. Price, Miss. Crawford and Edmund in Mansfield Park by Jane Austen
13
"My father declared he should invent a slip button"
2
Meaning of "It isn't a bit hotter here than in Mrs. Van Osburgh's conservatory—and some of the women are not a bit uglier"