As good as Brian Jacques or your money back?

Back in the mid-2000s, I read two books of Garry Kilworth's Welkin Weasels series, a set of two trilogies about anthropomorphised mustelids, one trilogy set in a version of medieval England and the other set in a version of Victorian England (plus other parts of the world which the characters travel to).

A tagline printed on the back of each of these books, at least in the editions that I read from the library, was:

As good as Brian Jacques, or your money back!

This is of course a reference to Brian Jacques's celebrated Redwall series which also features anthropomorphised animals, although the stoats and weasels in his books are generally the bad guys whereas in Kilworth's books they're the main characters, both good and bad.

But what is the story behind this tagline? Were Kilworth and Jacques old friends and this was a joke between them? Did Kilworth see himself as a competitor to Jacques? Did any serious complaints ever happen along the lines of "not as good as Brian Jacques, I want my money back"?

Strangely, Google lists no results when I search the exact phrase "as good as Brian Jacques or your money back". But I definitely remember it on the covers of those books.

Accordingly, I submit that you mis-remembered the tag line! As far as I can tell, the Corgi Childrens paperbacks were the only printed editions of these books, so that there is nowhere else you could have got it from.

The quote comes from a review by Victoria Neumark:

Garry Kilworth ploughs much the same furrow in The Welkin Weasels, first in a projected Thunder Oak trilogy.† But with an unusual twist: here, contrary to all the laws of fiction since The Wind in the Willows, the weasel is the good guy. Stoats are the baddies, ruling the land of the Welkin with an iron paw. Sylver the outlaw determines to find the lost humans and bring them back to restore peace and justice to the Welkin (“Ha!” thinks the cynical human reader).

It’s a quicker, slicker read than Brian Jacques, with less of the flavour of chivalry and more of the taste of today in its quips and puns. It's also more of a male read, for 11-year-olds and older.

† Neumark swapped the series and volume titles here: perhaps it was not clear which was which on the proof copy the T.E.S. was sent.

On the paperback editions of volumes 1–3 and 5 the quotation appeared on the front cover under the title: 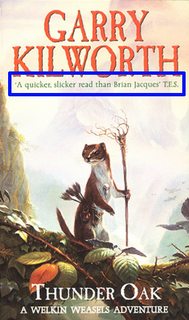 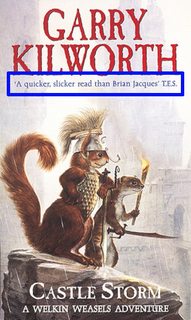 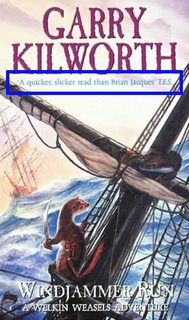 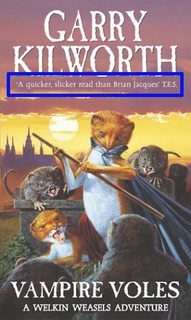 On volume 4 it appeared on the back cover instead: 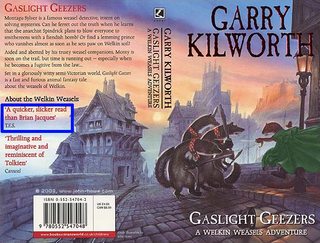 Not the answer you're looking for? Browse other questions tagged intertextuality redwall-series brian-jacques garry-kilworth welkin-weasels or ask your own question.

10
Do I need to read the Redwall books in any specific order?
4
Do ALL of the Redwall books include the death of a major character?
3
Were all the Redwall songs created by Brian Jacques, or based on some real songs?
3
Where did Jacques tell this story of how the mole accent was from truck-driving through Somerset?