Incerto by Nassim Nicholas Taleb - What is the sixth book? 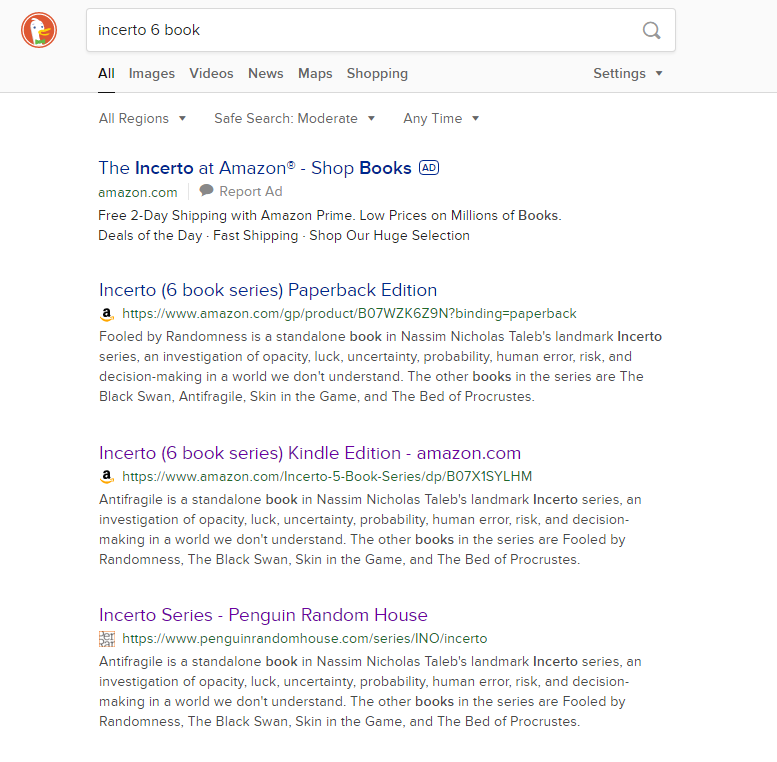 However, following the links indicates that Incerto is now a five-book series. I believe I have seen the title of the additional book in the past, but I cannot recall it, and the Wayback Machine does not seem to know.

What is the title of the missing book in the series?

While part of me likes to think that it is in the very nature of a philosophical essay on uncertainty to have an indeterminate number of parts, I suspect that the more prosaic answer is that he was two series of essays published; the five-part Incerto series and the, so far, single volume 'Technical Incerto' series.

I suspect that this has caused Statistical Consequences of Fat Tails: Real World Preasymptotics, Epistemology, and Applications (Technical Incerto Vol. 1). STEM Academic Press. 2020. ISBN 978-1-5445-0805-4 to be counted, by some, as part of the Incerto series.

It seems that "6 book series" in the screenshot was a typo in the title element[1] (and ultimately the database from which the web page was generated): when you enter the first non-ad link from the screenshot into a browser, it now says "5 book series". The series is identified there as consisting of the following books:

Penguin Random House has a page for the Incerto series also lists just these five titles and an Incerto five-book bundle from 2021.

The Amazon.com page for this book says that this book is "the first volume of the Technical Incerto, weaves a narrative around published journal articles". This indicates that this series will be aimed at an academic audience, whereas the Incerto series published by Penguin Random House is aimed at the general public. The screenshot in the question does not list Statistical Consequences of Fat Tails as part of the Penguin Random House Incerto series.

[1] The title element in HTML is the element that contains the text that is displayed in a browser's title bar (in browsers that still have one), the tab in which the page is displayed (hover the mouse pointer over the tab to see the full title), the bookmark (if you bookmark the page in your browser) and typically also in search results.

Not the answer you're looking for? Browse other questions tagged identification-request incerto nassim-nicholas-taleb or ask your own question.

9
What book did I read if not "The Dark Tower"?
6
Book about what book characters do when no one is reading
13
Postmodernist fantasy with nested stories structure
3
What is the name of this book about copyright?
2
Novel with a spy/assassin who helps the grand-daughter of a Nazi hunter, speaks Basque from learning it from a book, escapes a cave through water
4
Humorous novel about a man in a religious order who is sent into the outside world by his order, and has his worldview changed by his experiences
8
Identify a poem entitled Mock Song, written in middle English in the 13th-15th centuries