What are nuts and super-nuts in Saki's "Beasts and Super-Beasts"?

In Saki's Beasts and Super-Beasts he refers to "Nuts" and "Super-Nuts". For example, we have

“You are not going to be what they call a Nut, are you?” she inquired with some anxiety, partly with the idea that a Nut would be an extravagance which her sister’s small household would scarcely be justified in incurring, partly, perhaps, with the instinctive apprehension that a Nut, even in its embryo stage, would refuse to carry parcels.

in The Dreamer and

He was a youngish man of ordinary appearance, quiet of dress and unobtrusive of manner, and he could never wholly rid himself of the idea that a fierce light of public scrutiny beat on him as though he had been a notability or a super-nut.

in A Holiday Task.

I suspect this usage would have briefly fashionable, prior to the First World War, when the stories were first published in the Morning Post.

A search of the British Newspaper Archive finds that “super-nut” had a brief vogue in 1913–1914, and then vanished rapidly with the coming of the war. This cartoon by Lewis Baumer from Punch for 8th April 1914 gives some idea of what people thought a “super-nut” might look like: 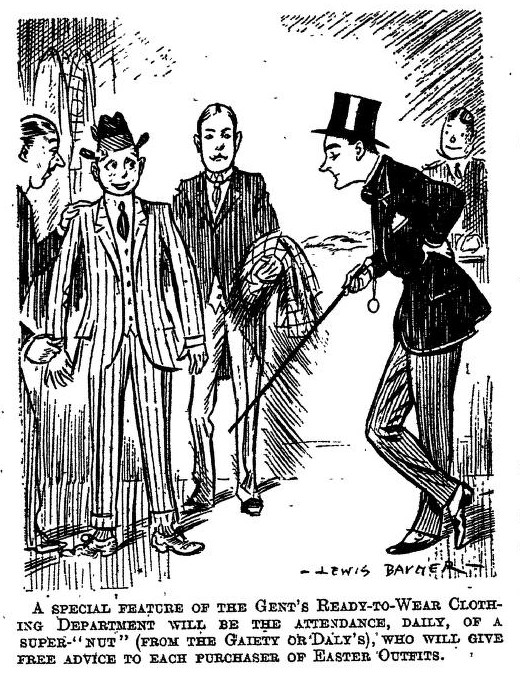 (The Gaiety and Daly’s were two theatres in the West End of London.)

Not the answer you're looking for? Browse other questions tagged meaning short-stories saki or ask your own question.