What classic mystery novels and stories led to "the butler did it" becoming a cliché?

"The butler did it" is a common trope indicating a hackneyed solution to a mystery. I have read several classic mysteries from the 1920s and earlier (Poe, Conan Doyle, Christie, Sayers, etc.) but do not recall a single instance of the butler's actually being the criminal mastermind, let alone enough such stories to justify the phrase's use as a cliché. The one example I can think of, Agatha Christie's 1925 short story "The Listerdale Mystery," plays with the trope rather than using it straightforwardly.

TV Tropes claims that the idea of the butler as perp was already clichéd by 1928. But the page gives no little evidence for this. The page discusses two origins for the phrase, both dubious:

In any case, TV Tropes treats the idea of "the butler did it" as cliché rather than discussing what led to its being seen as a cliché in the first place. Google Ngrams shows that the phrase was practically unknown before the 1920s and then jumped in usage:

But what led to this increase in the phrase's use? What mystery books or stories from the early days of the genre had the butler as the perpetrator of the crime, leading to this plot device becoming a cliché?

Note: this is not off-topic as asking for a list, because I'm not asking for recommendations. This is more along the lines of the many "What is the earliest example of X?" questions asked on this site before. The only difference is that I'm asking for a series of early examples rather than just one, because the sheer number of examples evidently led to this becoming an undesirable way to structure a mystery plot.

TL;DR: The criminal butler was not a cliché of detective stories, but of silent films!

Below I’ve listed ten silent films with criminal butlers, and another six where an apparently guilty butler is a significant suspect. I found these by searching the AFI catalog and IMDb for mysteries with “butler” in the synopsis.

I could find no evidence for criminal butlers being a cliché in detective stories until after silent films had already run the trope into the ground. The question was considered by Mike Grost, who noted that

The solution of Mary Roberts Rinehart’s The Door (1930) is notable for being one of only a few real-life examples known to me of an allegedly popular mystery cliché.

Grost was able to discover only two examples prior to Rinehart, both short stories by writers who are now obscure:

Evidence that criminal butlers were a cliché by the mid-1920s

From a review in Life magazine of Owen Davis’ play The Donovan Affair (1926), later made into a film directed by Frank Capra (1929), which features a murderous butler:

The other straight mystery play so far is “The Donovan Affair,” and if it did not have to stand comparison with “The Ghost Train,” it might seem more exciting. But we are getting to the point now where, after fifteen or twenty guests have been grilled and suspected of murder in turn, we not only don’t know who did it, but don’t care. We have a system now whereby we automatically suspect the butler right at the start and then pay no more attention.

Criminal servants in general were deprecated by S. S. Van Dine in one of his famous rules:

By 1930, the phrase “the butler did it” was a well-known reference to the cliché, as in this joke about plot spoilers in Judge magazine.

“Oh, you have just started to read it? Isn’t it a swell book? It fooled is right up to the last chapter. Of course the butler did it. Mabel thought the old nurse did it. No, they kill her, too. Still I don’t want to spoil it for you. It’s a good book tho’. So full of surprises.”

Or as in this cartoon by Norman Mansbridge in Punch magazine for 14 September 1938. 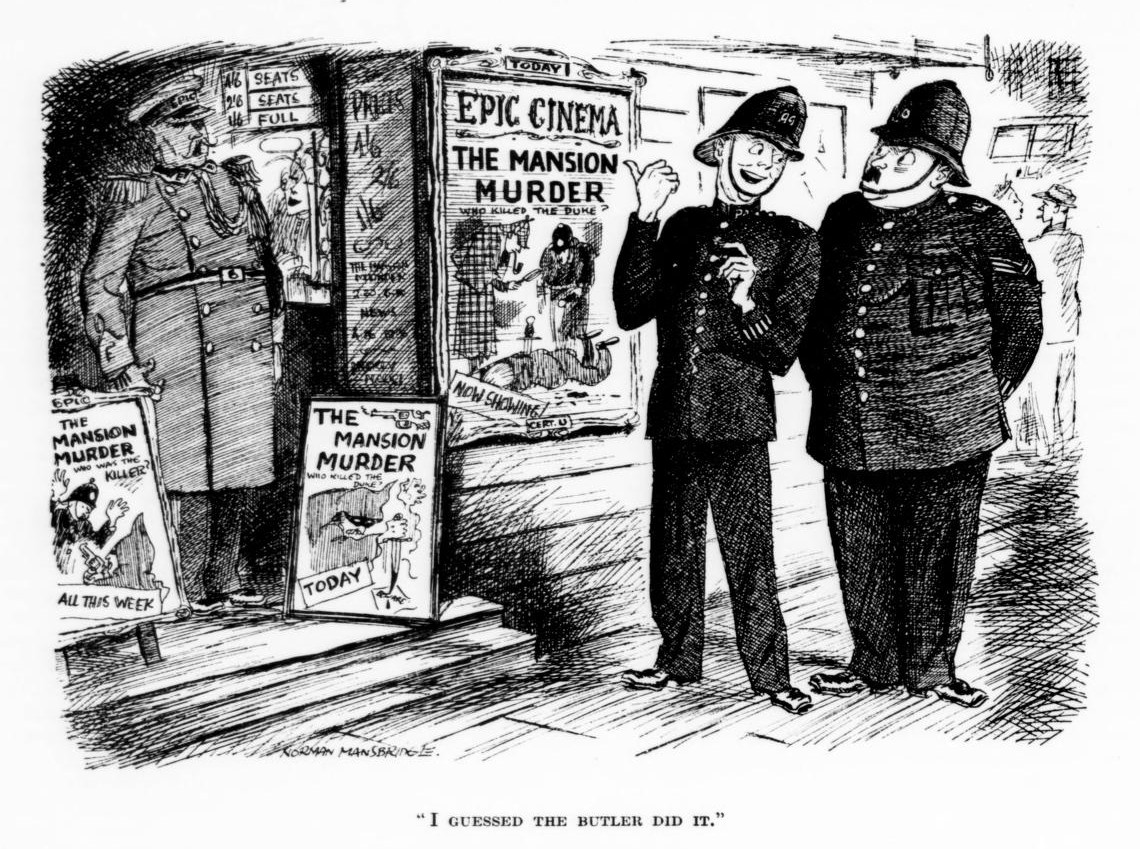 Not the answer you're looking for? Browse other questions tagged history-of-literature mystery-novels or ask your own question.

10
What is the difference between a philosophical novel and a novel of ideas?
14
How and why did the story of King Cnut change?